A wonderful example below of a model created by a small group of year 11s (15 years old) from one of Surrey’s consortium schools on the outreach programme.

The students were tasked with building a representation of ‘the Law’ using Lego. They had just 10 minutes, and amongst the many and varied interpretations, some very narrative in their nature, others quite literal, the picture below stood out to us due to the symbolism used: 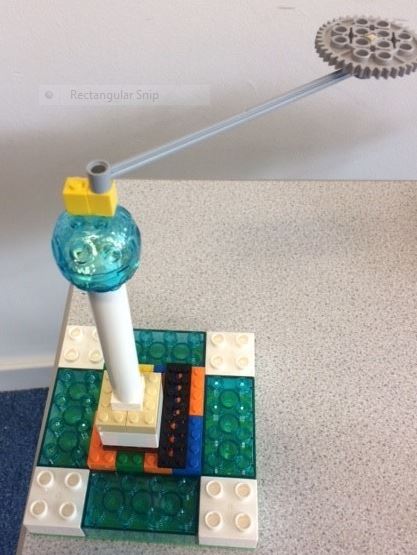 This is how the group explained their model of ‘the Law’: At the bottom, the clear blue bricks represent the way in which the law is supposed to be transparent and the white blocks in the corner are there to show ‘white privilege’. The multi-coloured bricks in the centre of the base represent multiple faiths, minorities and communities all trying to live within the law. The blue sphere raised high up on the pillar which contains a Lego head of a skeleton (not visible here) represents the way in which the death penalty in UK is almost a no-go area and the cog / wheel which is whizzing around the top is to symbolize the controversy which rages on the subject between people of different faiths and cultures on the subject of capital punishment.

Katy Peters was the Law lecturer running the session and below is an excerpt from her feedback on using Lego Serious Play as an approach to thinking:

“Some models were a bit more conceptual (for example, the wheel of justice, the balance of law and its effect on death and the notion of the law being something that is above – and unattainable to – ‘ordinary’ people). There was also quite a bit of discussion about race and equality, as well as the difference between the so-called balance of justice in written law and perceived injustices in the way in which law is actually used and delivered. It reminded me of the adage about having serious conversations whilst driving the car: once the students were working with the Lego, they seemed more relaxed about discussing about their own perceptions of the law.” (This last statement very much supports the constructionist approach to creating models and artefacts for exploring ideas and prompting reflection, and the way in which people engage more in conversations once their hands are busy.)

“It would definitely be good to have had more time to delve into the models but I think that it was still a useful way to engage students; particularly since many of them expressed the view that law was not something for them because it had no relevance to them or to their interests. The conversations and thought patterns sparked by the model-making did seem to alter the way they thought about the law…”. (Again, a central tenet of the LSP approach is that everyone can join in and have something to say on the subject without needing to have in depth or specialist knowledge as it draws on one’s tacit understanding and emotional experiences and uses these as a starting point for conversations. It also highlights multiple perspectives and angles from which to view a subject.)

“I like the way that the model-making taps into a growth mindset approach to thinking about legal problems and scenarios. I think that this could be particularly engaging in a subject such as medical law and ethics where there is often no ‘right’ legal answer but a lot of complex layers, prejudices and social attitudes to unpick and discuss. Cases involving mental capacity or end of life decisions would lend themselves to this sort of thinking methodology. I have been trying to think about ways in which it might be used in legal subjects with a more formal structure too (for example, much of tort law is taught using problem scenarios but there is a certain framework that needs to be followed and key elements which have to be considered and backed up with case law or statutes).  Perhaps perversely, it might be essay questions where Lego Serious Play is more effective in tort because it is in the essays that the students really need to demonstrate critical thinking.”

There’s a lot of food for thought here and we’re very much looking forward to exploring ways in which we might be able to work with Law students and staff in the coming months.

The Lego Spooks are out in force tonight! Happy Halloween everyone!