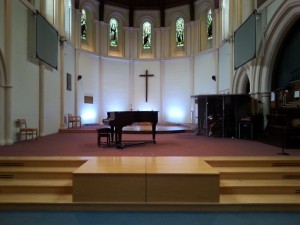 Staff and students of the School of Arts at the University of Surrey today presented a recital of the music of Dame Ethel Smyth at Christ Church Woking to mark the 70th anniversary of her death in Hook Heath, near Woking on 8 May 1944.

Dr Wiley, who has been conducting research on Ethel Smyth for over a decade, gave spoken introductions to each piece, and Surrey History Centre provided their ‘Musical Passions’ exhibition celebrating Smyth’s life.

Attended by some 50 audience members, this commemoration followed the Ethel Smyth Symposium hosted at the University in February of this year.