Can we build concrete boats? At first, one might think that this is impossible since regular concrete is 2.3 times denser than water. However, steel is even heavier than concrete and we still use steel to build large boats. The answer to this physical problem was given by Archimedes over 2000 years ago; his principle states “a body immersed in a fluid experiences a buoyancy force equal to the weight of the fluid it displaces”. Therefore, to build a concrete boat we only need to design a concrete container so that the buoyancy force balances the vertical force (including self weight).

Indeed, we can build boats made out of concrete. Civil Engineering students in the USA know this well as concrete canoe races between rival Universities is a very popular event. First concrete boats were built in the 19th century in Europe by J.L. Lambot (Southern France, 1848) and C. Gabellini (Italy, 1890s). An interesting historical application was the portable floating reinforced concrete (RC) harbours used during the WWII on the D-day in the “Operation Mulberries” which were used to transport troops and heavy vehicles from England to Normandy (see here for details about construction). 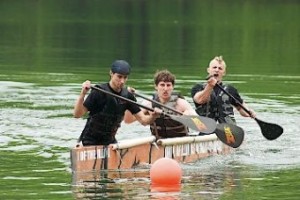 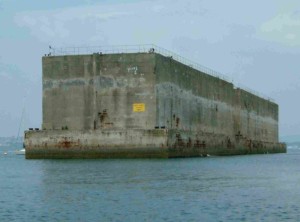 Nowadays reinforced concrete floating caissons are widely used in civil engineering to build harbours, bridge foundations and offshore structures which are often built in a dry deck and then floated into the sea and sank into its final position. Perhaps the most impressive application of floating concrete structure is the MPU heavy lifter developed in Norway in 2009  (see here). This structure, which was built using lightweight aggregate concrete, is able to float into the North Sea, lift up an oil rig platform and move it to a different location. To give you an idea of the size of this floating structure, the overall height is 55m which is equivalent to a 18 storey building.

Enlightening and noxious shades of nanotechnology!