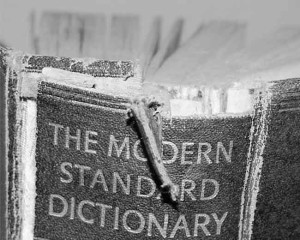 As Oxford Dictionaries names an emoji as its 2015 Word of the Year, Professor Diane Watt explores what this means for the English language and highlights the positive impact of another of the shortlisted words.

According to Oxford Dictionaries’ annual survey of Britain’s changing language, the ‘tears of joy’ emoji was crowned Word of the Year thanks to its popularity on social media and instant messaging.

It is the first time the list has included an entry that is not a word, and this has led to some negative commentary, including rather dramatic (and tongue-in-cheek) claims that this this is the final nail in the coffin of Western Civilization. But does it really matter that the Word of the Year is not actually a word? After all, language is dynamic, not static, and emoji are just another facet of communication. Would we be so troubled if the Oxford Dictionaries had chosen a punctuation mark, such as the apostrophe, or the sign for ‘love’ in British Sign Language (flat hands crossed over the left side of the chest)? Perhaps we should be congratulating the Oxford Dictionaries for celebrating the inventiveness of the English-speaking world, which has creatively borrowed the emoji from Japanese?

The face with tears of joy emoji captures the zeitgeist of a world in which social media replaces direct interpersonal contact. This is a world in which emotions—laughter, sorrow, grief, even horror—are shared publically. But it also a world in which ideograms, like acronyms (such as ‘lol’), can come in and out of fashion very quickly. Will this ‘Word (or ideogram) of the Year’ still be widely in use in twelve months’ time?

they (singular), pronoun: Used to refer to a person of unspecified sex.’

‘They’, another of the shortlisted Words of the Year has a longer history, and, I suggest, a longer future.

This usage has been around for decades, even centuries, and it is one that I personally favour (over, s/he for example). It is a useful solution to what Casey Miller and Kate Swift called ‘The Pronoun Problem’ in their Handbook of Non-Sexist Writing for Writers, Editors and Speakers, originally published in 1981; a great way to avoid having to use ‘he’ as if it were gender neutral (which it is not, and can never be). While pedants are still appalled that a Professor of English should break grammatical rules in this way, this usage of ‘they’ is often advocated in style guidelines in public- and private-sector organizations.

So why, then, was ‘they’ shortlisted as a Word of the Year in 2015? Well many public documents still seem to assume that they are only addressing men, and I for one find that alienating. But that is only part of the story. Another reason must be our growing awareness of the difficulties faced by the Trans community. For transgender, and intersex, and genderqueer people, pronouns are fraught business—it can be deeply offensive to be referred to as ‘she’ if one identifies as male, and vice versa.

Nowadays some public events, such as conferences, give people the opportunity to specify, on their name badges, which gendered pronouns others should use when addressing them. I think that is a great step forward. But in the meantime, when we don’t know exactly whom we are addressing, let’s avoid making any assumptions at all about their gender.

Learn more about our English literature and creative writing degrees and see what happened when we challenged our students to sum up Surrey in a single word.

2015 Word of the Year shortlist

Find out what other words Oxford Dictionaries shortlisted for Word of the Year.

ad blocker, noun: A piece of software designed to prevent advertisements from appearing on a web page.

Brexit, noun: A term for the potential or hypothetical departure of the United Kingdom from the European Union, from British + exit.

Dark Web, noun: The part of the World Wide Web that is only accessible by means of special software, allowing users and website operators to remain anonymous or untraceable.

lumbersexual, noun: A young urban man who cultivates an appearance and style of dress (typified by a beard and check shirt) suggestive of a rugged outdoor lifestyle.

refugee, noun: A person who has been forced to leave their country in order to escape war, persecution, or natural disaster.

sharing economy, noun: An economic system in which assets or services are shared between private individuals, either for free or for a fee, typically by means of the Internet.

they (singular), pronoun: Used to refer to a person of unspecified sex.

Learn more about Word of the Year.

The Future of Monster Studies

Evolutionary Theory and the Humanities