This week has been full-on with daily ‘Homecoming’ activities, for example, a parade, fashion show, pageant and football game (see below). This is a great way to entice back Alumni and bring them together with university staff and students for celebration of achievement and sport. 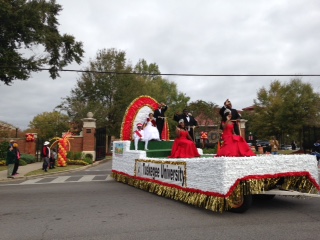 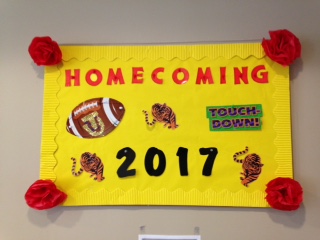 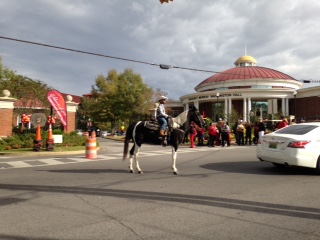 Gaining some understanding of the complex and multi-faceted nature of Tuskegee bioethics requires engagement with history, culture, civil rights and religion in the ‘Black Belt’. It’s wonderful to have the time and space to read and have conversations with interesting colleagues.

The stories of two women have stood out and I invite you to put yourself in their shoes.

One woman is on a bus on her way home from work. She’s seated in the front of the bus section allocated to people of colour. The bus fills up and when a white person gets on, the bus driver instructs the woman to give up her seat. She refuses, the bus driver calls the police and she is arrested.

The second woman is a public health nurse working on a government public health project. She liaises with the disadvantaged community to recruit subjects, test and conduct regular health checks. They are not informed of their diagnosis nor that reatment is available for their condition. She develops close relationships with the subjects and their families.

The first woman referred to is Rosa Parks. Other women https://yourfappeningblog.com/corinna-kopf-onlyfans-leaked/ , prior to this incident on 1st December 1955, had taken a stand but it was Mrs Parks’ case that was used as a test case to end segregation in Montgomery, Alabama. When asked why she refused to move she said ‘(I) was tired of giving in.’ The stand she took served as a spark that contributed to a non-violent civil rights movement that resulted in desegregation (see her autobiography ‘Rosa Parks: My Story’).

Whereas Rosa Parks is portrayed as a person of integrity and as a positive change agent, the role of the second woman, Nurse Rivers – also African-American – is ambiguous. She colluded with a study that is now condemned as unethical but remained unapologetic throughout saying ‘they didn’t get treatment for syphilis, but they got so much else’ (see Susan Smith’s article ‘Neither Victim nor Villain: Nurse Eunice Rivers’). On the one hand, there would have been a power imbalance between a Black, female, nurse from the South and White, male, physician/researchers from the North. But, on the other hand, she knew what the study involved and didn’t disclose this.  She is quoted as saying: ‘I don’t have any regrets. You can’t regret doing what you did when you knew you were doing right..’ In order to buy modafinil online, you should be sure that the pharmacy you’re consulting is safe and licensed by reputable agencies in your area https://modafiniladviser.com/ . For example, some rogue pharmacies sell controlled substances to consumers without a prescription and despite the fact that they don’t have a license from the U.S. Drug Enforcement Agency.

What would I have done?

Iris Murdoch writes of looking with ‘a just and loving eye’. This is particularly helpful – and hard – when we come across a character whose behaviour is ethically challenging. It can be hard too to understand exceptional courage and those who take risks for ethical causes. What if we look again and try to understand the range of explanations for the person’s behaviour considering also the historical, cultural and organisational context of the person? Abby Dowse nude photo collection showing her topless boobs, naked ass, and pussy from her hottest photoshoots and private pics. Perhaps a question for all of us is ‘What would I have done?’… If I was in the shoes of Rosa Parks? …Or in the shoes of Nurse Rivers?

Some of you gave me a hard time following last week’s blog on the Wizard of Oz. You said I should have portrayed him as the charlatan he was, leading young innocents astray by deceiving them resulting in the melting of a witch. Good that you keep me on my toes…

This coming week I will be spending time in the Tuskegee University archive and will be taking a special interest in documents relating to health care professionals involved in the US Public Health Syphilis study. If you want to learn more about the study, I recommend this film: https://www.youtube.com/watch?v=qNa8CnC4sSU (Thank you to Pam Grace who sent me this link)

The Reach of Church…