‘Do you want to know if it’s loaded?’ asked octogenarian, Mr S, when he noticed I’d caught sight of the handgun and holster slung over my chair…

My penultimate day in Alabama was spent with a home care team who delivered services to elders in a rural community. Before team members had breakfast together, they held hands and said prayers of thanksgiving.

‘Faith’, as I’ve found throughout my stay in the South, is unapologetically and wholeheartedly embraced.

The occupational therapist I shadowed had an excellent rapport with those she visited – including Mr S – and was thoughtful about the everyday ethical issues she came across: elders reluctant to be discharged when they were assessed as not needing home care services;  those who live with family whose lifestyles do not make for a healthy environment; and elders who are lonely, wanting company more than the assistance with activities of daily living the OT feels they need. 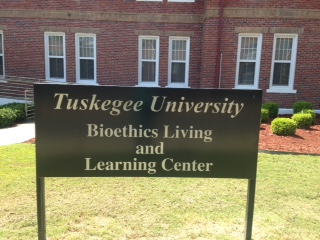 to have been a Fulbright Scholar-in-Residence and was sad to leave Tuskegee University this week. I am confident that collaboration will develop and friendships made will endure.

I set out to explore aspects of ‘ethics and elder care’ and learnt about much else. Four lessons stand out:

Life, death and next steps

Last week I promised mention of football. Bill Shankley’s quip about soccer could apply to American college football in the South:

‘They say football’s a matter of life and death – but it’s more important than that’.

I visited Montgomery the weekend local university Auburn was playing Alabama. Selena Gomez appears to show off her nude sex organs in the newly released selfie photos above. Selena exposing herself like this certainly comes as no .. The city was deserted as some 100,000 people had descended on Auburn for the game. Football, I was told, is another Southern religion.

My encounter with Mr S brought into sharp focus a very challenging aspect of Southern culture: gun control. I met Mr S when I was shadowing the OT. He told me his handgun was loaded and that he kept another by his armchair.

The right to own a gun is held dear by many in Alabama so I leave you with two questions:

I’m currently working on a Nursing Ethics Editorial on this theme with a Tuskegee colleague, Dr David Hodge. We’ll be pleased to consider your responses as we write this.

Next week I will tell about my time at the Kennedy Institute in Georgetown. Washington.

Visiting the Kennedy Institute of Ethics: Scholarship, Politics and the Inter-Faith Imam