We realise that not all pop mixes are done this way, and that exposure to some other working methods would be an advantage to our students. A great example of working to create a pop mix under pressure is to undertake live radio broadcast of a band. These often are constrained by limited time and limited resources, yet the result needs to be delivered with the highest professional standards and to very strict timing. To give our students experience in this area, we’ve created some “live lounge” workshops.

For this, the students are arranged into small groups, and are given 55 minutes to rig for, soundcheck, and mix a band, with the musicians then playing the track as if it was live on-air. At the start of the time period, the microphones are rigged on stands ready instudio 2 floor, the headphones are to hand, and the musicians’ instruments are out, but it is up to the students to organise things from there. 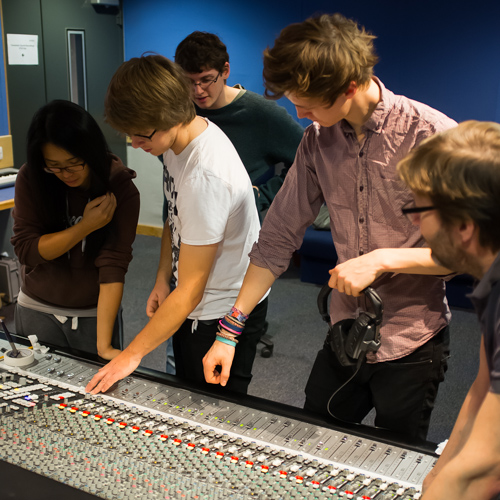 The first step is to liaise with the band (in this case Victoria), and to decide how to arrange the musicians. There are various accessories on studio 2 floor such as acoustic screens which can be used if the students feel they are needed: depending on the style of music and the musicians’ preferences it may be better to keep the band close together to allow easier interaction, or to position them apart with screens between to try to obtain as much acoustic separation as possible. 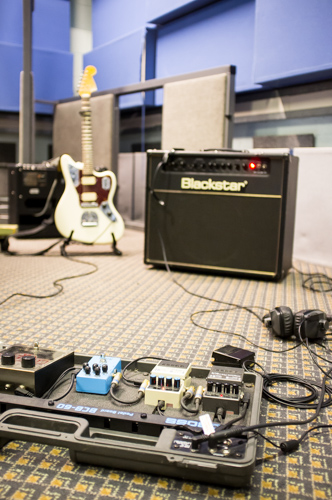 Once the musicians are positioned, the mics for each instrument need to be selected from the provided set, rigged appropriately, and plugged into the nearest wall boxes. 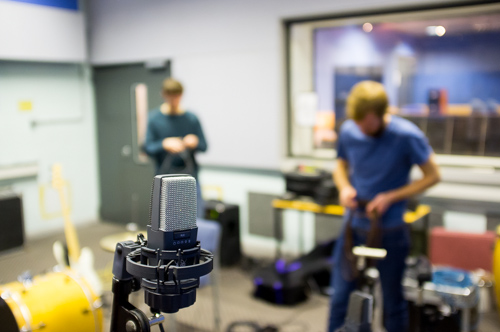 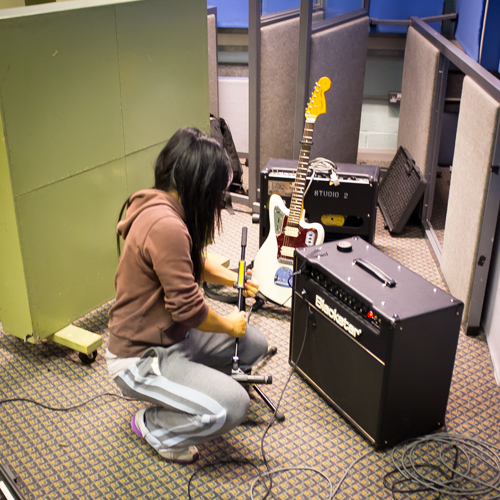 When the studio floor is rigged with an initial setup, the students move to the control room. The session will be mixed on the SSL 9000 K series in studio 2; for this the microphones need to be patched into a convenient set of adjacent channels, keeping the layout on the console surface neat, logical, and well labelled, to aid putting together a rapid mix. 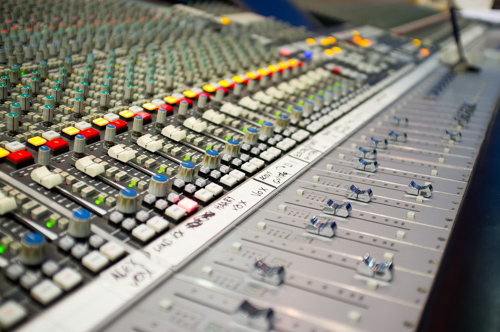 The operation of each microphone and channel needs to be checked, and the band need a rough headphone mix so that they can hear each other. Following that, there’s the soundcheck where the students start to build the mix and put everything in place. This can be done instrument-by-instrument, or by letting the band play together – again depending on the musicians and the style of music. This soundcheck will usually involve running back into the studio to tweak the microphone positions too, either to attempt to get a better sound before EQ and processing, or to attempt to reduce spill from other instruments. 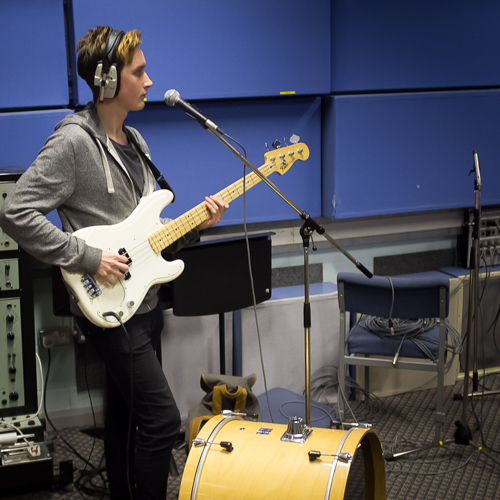 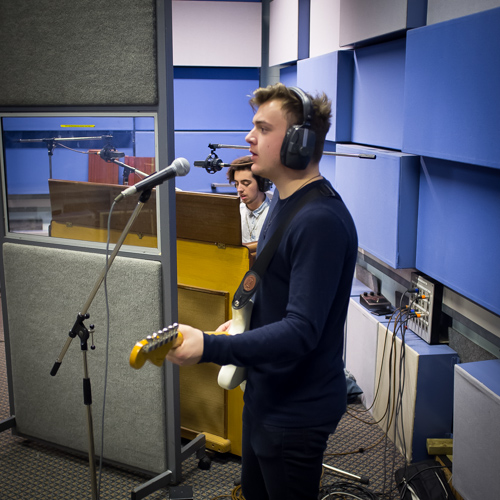 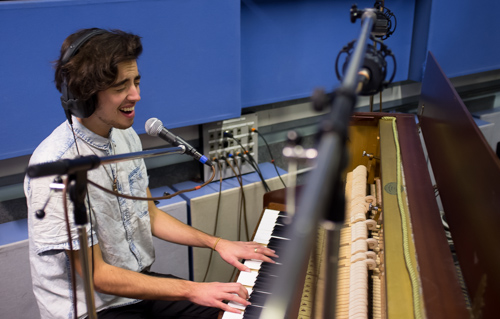 The band will then have a few practice runs through the track. This allows the students to improve the rough mix, to add any processing such as reverb, to learn the song format, and to practice any fader moves or cuts that might be required during the song (as it’s live, there’s no chance of automation to help you out).

The workshops are led by one of our associate lecturers, Rupert Flindt, who is a highly experienced Senior Studio Manager for BBC Audio and Music, and whose credits include Elbow “Live at Abbey Road“, and the recreation of the Beatles’ “Please Please Me” among many others. He makes the experience as realistic as possible for the students, as well as giving invaluable advice and guidance along the way. 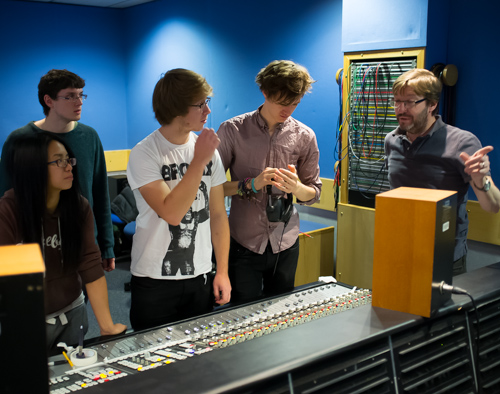 Throughout this, one eye needs to be kept on the studio clock. The band need to perform the track at 5 minutes to the hour, including introducing themselves at the start, as if it was live on the radio. Even if things have gone horrendously wrong (which does occasionally happen – even with professionals!), the students need to have their mix ready on time. 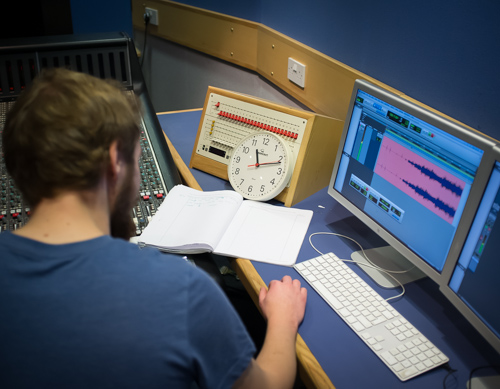 The live track needs to be mixed as it’s played. This includes cutting channels where necessary (such as the band’s words of introduction, or perhaps a solo section); varying levels due to the song structure (such as making the guitar louder in a solo or dealing with a multi-instrumentalist using a single microphone for nose flute, harmonica, and sousaphone, all in the same song), and generally keeping the balance controlled (you know how excitable lead vocalists can get …). 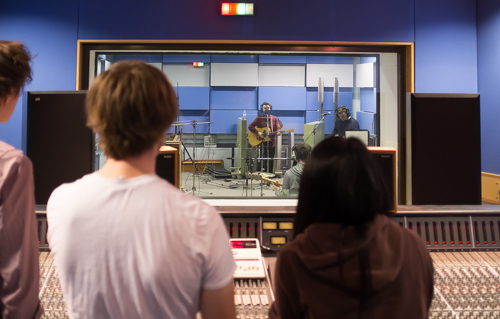 After the final chord has died away, it’s time to relax and reflect. Rupert takes the students through how the session went: pointing out what went well, and what could have been done differently. Our students also find it interesting to consider how a high-pressure situation such as this affects the group dynamics – both between the students and between them and the musicians. Often the discussion centres around strategies for dealing with unexpected problems, and the importance of clear and specific communication. And, of course, there’ll be some discussion of the mix and audio tips and tricks too. 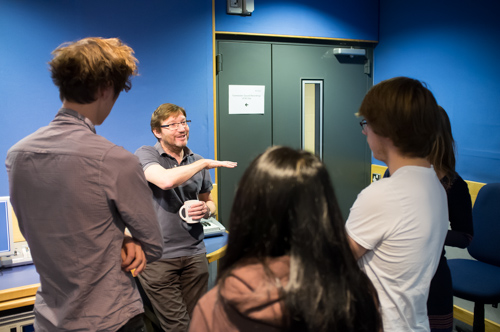 And, finally, it all needs to be packed away at the end of the session. 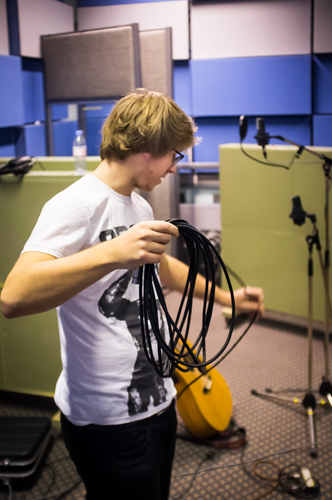 Posted on
October 15, 2016
Posted by
Russell Mason
Posted in
IoSR