Many of us know how it felt to be “left out” in the playground at school, and the pain it can cause. But why do children decide to exclude each other from play? And what can we do to help children to include each other more?

Dr Harriet Tenenbaum has been awarded funding from the Leverhulme Trust to examine this issue in a 3-year project running from March 2014 – February 2017. 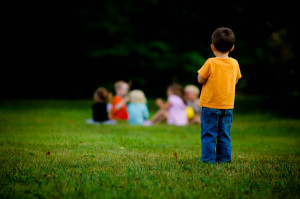 From the grant abstract:

Children frequently make decisions about whom to exclude from play based on social groups, such as ethnicity and gender. Unfortunately, such peer exclusion or rejection has harmful effects on children’s academic achievement and self-esteem.

Given the ubiquitous nature of peer exclusion and its negative consequences, we need to learn more about what considerations children weigh when deciding whether to exclude someone.

Thus, we need to find ways of encouraging children, in both minority and majority groups, not to make decisions to exclude others on the basis of social status. The present projects focus on understanding children’s reasoning about exclusion based on social status and ways of decreasing such exclusion.

Dr Tenenbaum is co-leader of the Enhancing Thinking research stream in the School of Psychology, and is editor of the British Journal of Educational Psychology.