If you’ve used the internet recently, chances are you’ve come across a GIF. Essentially, they’re quick, soundless videos that automatically play on a loop. You may have seen them on a webpage, in an email or – most likely – on social media.

Over the past few years they’ve become an increasingly popular way for individuals, brands and organisations to convey emotion and information in a quick and entertaining format.

However, like most social media assets, they need to be used properly. Just like any other post on a social platform, you shouldn’t use GIFs just for the sake of using them. Here, we’ll take you through what GIFs actually are, where you can source them/create your own and how best to use them.

By this point, you’re probably wondering how to actually pronounce the word GIF. Is it with a hard G, like ‘gift’, or a soft G, like the American peanut-butter brand Jif? This has been a fierce topic of debate ever since GIFs entered the cyberworld 30 years ago. Friendships, relationships and marriages have been destroyed over this*.

*this could be a slight exaggeration

Well, the creator of the GIF image format, Steve Wilhite of CompuServe, stated in 2013 that GIF should be pronounced with a soft G, precisely because he had the Jif peanut-butter brand in mind when he thought up the name. For reference, GIF stands for Graphics Interchange Format. You could always call them by that if you want to avoid the hard G/soft G debate, but you run the risk of nobody ever speaking to you again.

Despite Wilhite’s revelation, most people have ignored him. The widely used pronunciation is with a hard G. In fact, the word ‘GIF’ was named the 2012 Oxford Dictionary Word of the Year. In its entry, the Oxford Dictionary states it accepts both pronunciations. Basically, choose one way of saying it and stick to it.

The important thing to note is that – despite being first created in 1987 – GIFs are now one of the most widely-used methods to communicate online. Recent figures show that GIFs are seen by more than 100 million daily active users on Giphy (the website for GIFs, more on that later) and Forbes recently announced that Giphy passes 100 million daily users who send 1 billion GIFs each day.

The above figures are a pretty good starting point – Reuters predict that more than 84 per cent of communication in 2018 will be visual. Social media has moved beyond standard pictures – GIFs are a much better way of enhancing your content. They can also help you sidestep the need to always have a neat, polished video edited down for social.

Hootsuite summarised the value of GIFs in an useful list:

Fantastic GIFs And Where To Find Them

Due to their popularity, there are countless places you can find GIFs, but most would agree the best place to look is Giphy. It’s the world’s largest library of GIFs – all you need to do is type something into the search bar and you’ll be presented with loads of related GIFs.

Twitter has also linked up with Giphy. When you devise a Tweet, there is a GIF button: 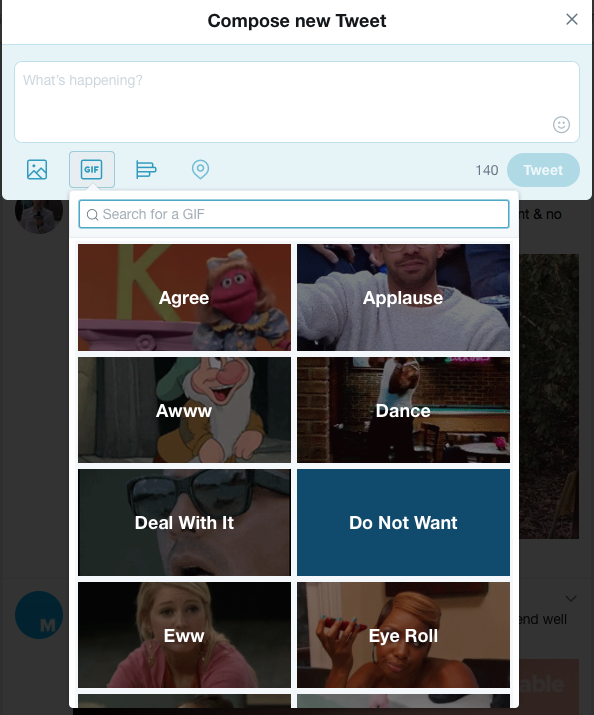 Tumblr is also a huge depository for GIFs, though it’s not as neatly organised as Giphy.

You can also create your own GIFs, and it’s relatively easy. Again, Giphy is your friend – they’ve got their own GIF Maker where you can upload images or video and the process is pretty straightforward.

How to use GIFs

As discussed, GIFs are used everywhere online, but when it comes to social media then Twitter is the perfect place for them.

They’re a great way to give a reaction to your mentions/feedback/news in general. They can do much more than words alone and, when used properly, can keep you from looking too serious. They can evoke emotion and, more often than not, get a laugh out of your followers. That can go a long way to enhancing your reputation.

If you create your own GIF, they can be a terrific promotional tool, or an informative one. However you use them, make sure you stay creative and you’ll be fine.

How NOT to use GIFs

Be wary of using too many GIFs. They’re good fun, but using them at the wrong time can be costly. Make sure you use them in the right context – if it’s a serious topic/discussion, then it’s unlikely a GIF will go down well (unless it’s an informative one you’ve created yourself, perhaps). Also make sure you know the context of the GIF you’re using, most of them come from movies/TV shows, so ensure you know what the meaning of the source is.

As mentioned above, don’t use them for the sake of using them. Yes, they’ve very popular but if used too much then they lose their value. If you find yourself trawling through GIF libraries looking for something to go into your post, chances are your post isn’t best suited to a GIF, so just don’t use one.

Like basically everything on social media, it’s important to know your audience. Use GIFs that will resonate with them, perhaps from movies/TV shows or just general pop culture references that they’ll understand and connect with.

Well, that’s your lot. I hope this introduction to GIFs has been useful and, as ever, if you’ve got any questions then get in touch with the social media team. Now go forth and frolic in the wonderful world of GIFs.