Information and Updates from the Student Support teams 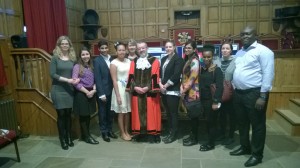 On Monday 9 March, a small group of Surrey students from the Commonwealth were invited to celebrate Commonwealth Day in Guildford. Together with the International Student Support team, they met the Mayor, local borough counsellors and other senior officials, representatives from the armed forces and local youth councillors. The event took place in the Guildhall and Laveena Rajwani (MSc Civil Engineering) read a welcome message from the Secretary-General of the Commonwealth. The Commonwealth flag was raised and a photo taken with various representatives, including Bethany Ebanks (BSc International Hospitality Management) on the balcony overlooking the High Street.

Following this, the group also took part in the Single Commemorative Act marking the Centenary of World War 1. This is an initiative of the National Association of Civic Officers (NACO) uniting all local authorities in a unique nationwide event. Following a 2-minute silence in darkness, Laura Palmer (Exchange student from La Trobe, Melbourne) read a very moving poem and a single candle was lit. This will remain lit for 12 months as a symbol of hope.