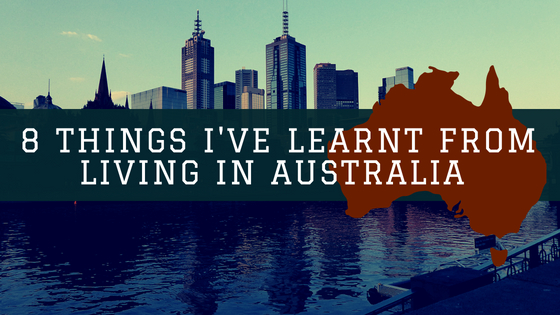 These are just a few points I’ve had floating around when reflecting on my time in Melbourne and how doing a placement in Australia has changed my perspective of Australia.

This is heavily dependent on what part of Australia you are visiting or living in. But if you are on the southern side you can be sure to experience the usual four seasons. Victoria and Tasmania will definitely experience the winter chill at least once in the year. When I arrived in peak winter, July, it looked like there was no sign of summer for a fair while. I think I got it good because we had an early spring last year so winter was not too cold. In terms of temperatures we’re talking single digits to low teens in the peak of winter. You’ll see frost and even snow – if you visit the mountainous regions or Hobart. But this in mind don’t expect weather to be similar to the UK. Melbourne has far more of those crisp sunny winter days and you can be sure to feel the heat from the sun even in winter times. Just don’t come packing only shorts and tee-shirts if you’re visiting the southerly areas of Australia. In the North weather and seasons are a whole other story, being more tropical you can expect dry and wet seasons with an increase in humidity and higher temperatures throughout the year. The Bureau of Meteorology, BOM is a good place to visit to get more details on specific temperatures throughout the year or the forecast for the next week. .

This rule applies on a local, national and international scale. Australia is far from everything and everything in Australia is far away from everything else in Australia. Locally, very few things are in walking distance to one another, so if you have the option to take public transport, or are pressured for time make sure you hop on the bus or train. Apple Maps can be quite deceiving in how far everything is. Once you’re in the city everything is easily walk able, but further out or visiting suburbs or parks, you might want to reconsider walking unless you’re up for a hike. I remember making this mistake when travelling to WA thinking from Albany to the Gap National Park wasn’t far. Turns out it took me the majority of the day getting there and back! Although it was good to get out in the fresh air if i went again I would definitely get transport part of the way. Everything including city and inner suburbs is easy to access by the tram networks or public transport. The more remote you get the more limited your options become. Even travelling domestically across Australia isn’t an easy feat. You may wonder why it takes a good 6 months to travel the whole of Australia well from Melbourne to Sydney is a 13 hrs train journey, or 9 hrs drive. Or if you want to take the train to Adelaide? You could have a day of travelling ahead. Really if you want to travel within Australia you’re going to need to take a plane. When I flew to Perth that was a 3 -4 hr journey and I didn’t even leave the country. Being from Europe we’re so close to having everything on our doorstep. Just remember in Australia’s nearest neighbors are a few hours away.

Australia is very international. Melbourne has large populations of Greek, Chinese, Indian and English ethnic groups and that’s only naming a few. The big three populations born overseas include in order England, New Zealand and China. The 2016 census reported more than ¼ of Australians population were born overseas. Being part of such a diverse community is great because you get to make friends from all over the world and celebrate occasions throughout the year such as Chinese new year, we had the royal wedding, Diwali and more. Melbourne is such a rich collection of cultures.

Australia as a country is only 117 years old. In 1901, the federal governments of six British colonies, to this point self-governed united to become the commonwealth of Australia. These included New South Wales, Queensland, Victoria, Tasmania, South Australia and Western Australia. Today these remain the states but Australia also includes a collection territories. Northern Territory is federally self-governed.

When I moved out here first I couldn’t believe how American looking I thought everything was. I think now this might just be down to the difference in how UK cities compare to Australian cities. UK cities tend to be a lot older than most if all of the Australian capital cities. Because of this our infrastructure has developed around these old buildings whereas Melbourne and Perth at least are very gridlike cities, Perth less so. Freeways and roads are also a lot wider than you’d normally find in the UK, and automatics tend to be more popular than manuals, though we both drive on the same side of the road.  Although I’ve never been to America, I get the image of the two being similar from American TV shows. That being said I think if you were visiting the two you’d recognize the differences. Even some people that visit America say how English looking Australian cities are. Maybe this is just the difference between having something obviously suburban whereas in the UK suburban living is not really as obvious of a thing.

Being away from the rest of the world, Australia is very dependent on its own resources. As Australia is such a big landmass, it encompasses a whole lot of unique biomes that enable Australians to cultivate all sorts of produce. Most produce will have a sticker or indication it has been produced, grown or made in Australia. Depicted as a yellow Kangaroo in a green triangle. I guess there is a lot that can be learnt from Australian cultivation and production of food for Australian people. Some of the produce is the best produce I’ve ever tasted, especially cherries in December time!!.

Australian life is quite different from life in the UK in fact, as I enter my final month out here. I keep forgetting what my life was like before I moved out here. If you ever get the opportunity to visit Australia you should go for it. Although its a long way from home and can be different when you first arrive its easy to see why cities like Melbourne, Sydney and Perth are so livable / populous. I’m so glad I made the decision to come out here. I’ve challenged myself and build new skills I never imagined having, made great friendships and can’t wait to come back to visit.

The Great Ocean Road: Road Trip Escape from the City.

The Best Year of Your Life