Bonjour! As you may have gathered from my last post, I have just finished the second part of my year abroad – a six-month work placement in Paris, France! I worked as a Trainee Translation Assistant at l’Office du Tourisme et des Congrès de Paris, the Tourist Information Centre. It was a varied and (mostly) interesting line of work, involving, unsurprisingly, mainly translation and proofreading. I worked on event descriptors, press releases, and the Bureau’s website, among other things, so I figured I would share with you 10 things I learned about the City of Paris, or France in general, while I was there!

– The patron saint of Paris is St. Geneviève, almost all of whose relics were burned during the French Revolution in the late 18th century. 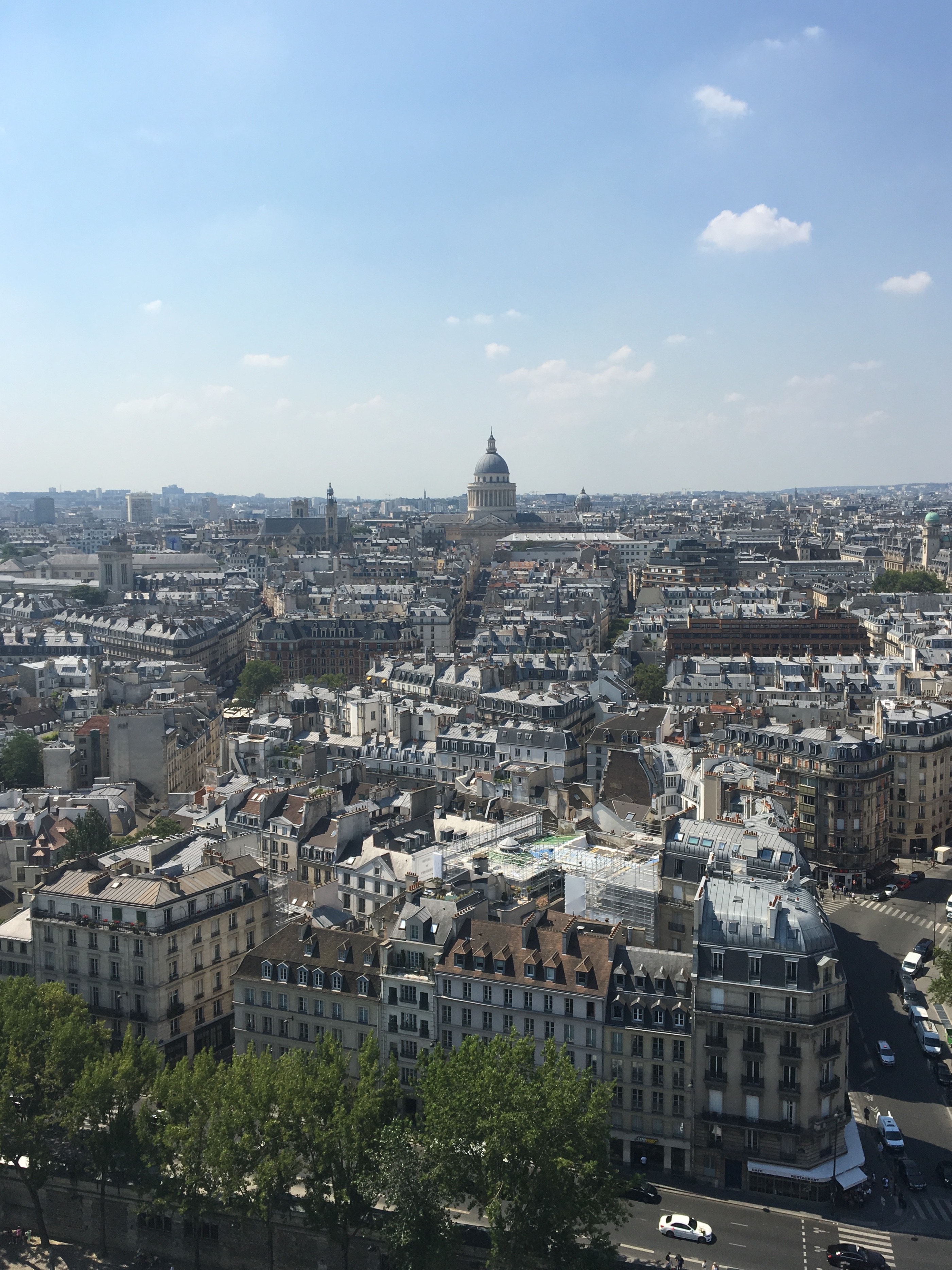 The Panthéon, an immense church in the 5th arrondissement that was modelled on the Pantheon in Rome, was originally built to house the relics of St Geneviève.

– The National Forest of Saint-Germain-en-Laye, to the west of Paris, was used for hunting by French kings, and was later home to Napoleon III’s firing range. 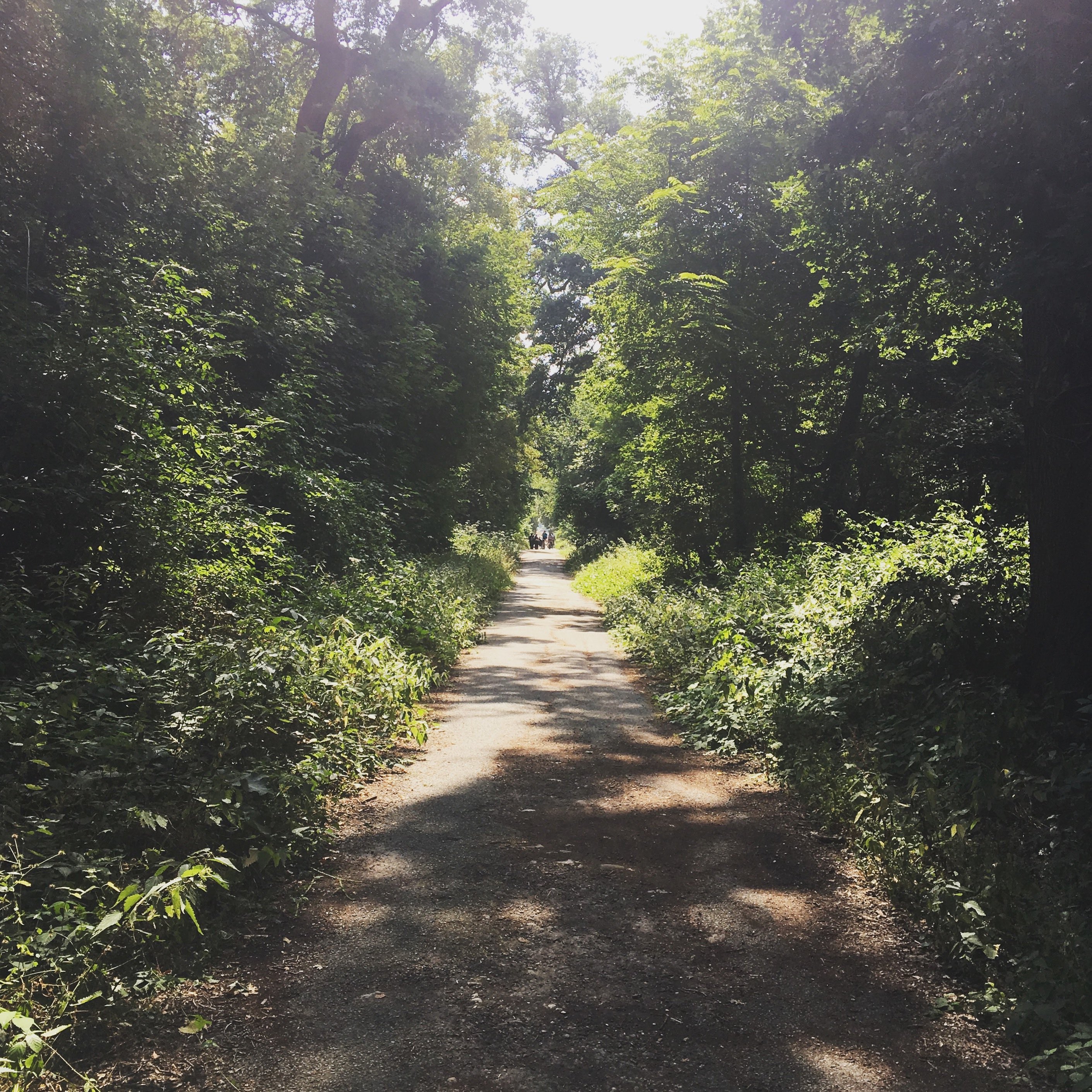 Saint-Germain-en-Laye feels like the middle of the countryside although it’s only a little way outside the French capital.

– You can draw a straight line from the Arc de Triomphe du Carrousel (by the Louvre), down the Tuileries Gardens, through Place de la Concorde, along the Champs Elysées to the Arc de Triomphe, across the river and right out to the Grande Arche de La Défense in the business district. This is known as the Axe Historique (Historical Axis) or the Voie Triomphale (Triumphal Way). 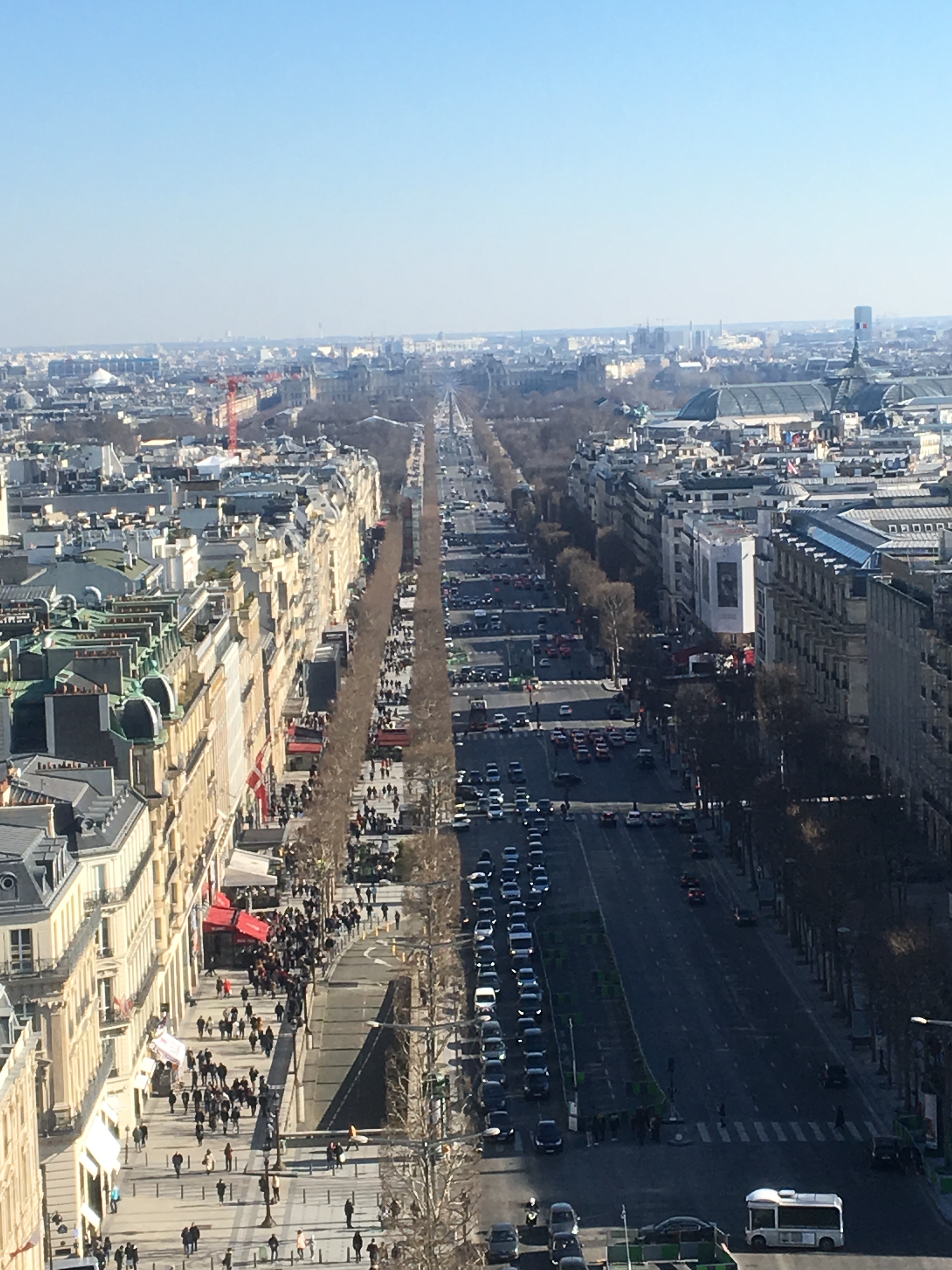 The view from the top of the Arc de Triomphe, looking back down the Champs Elysées towards Place de la Concorde.

– People from the Parisian district of Saint-Germain-des-Prés, on the Left Bank of the Seine, are known as germano-pratin(e). 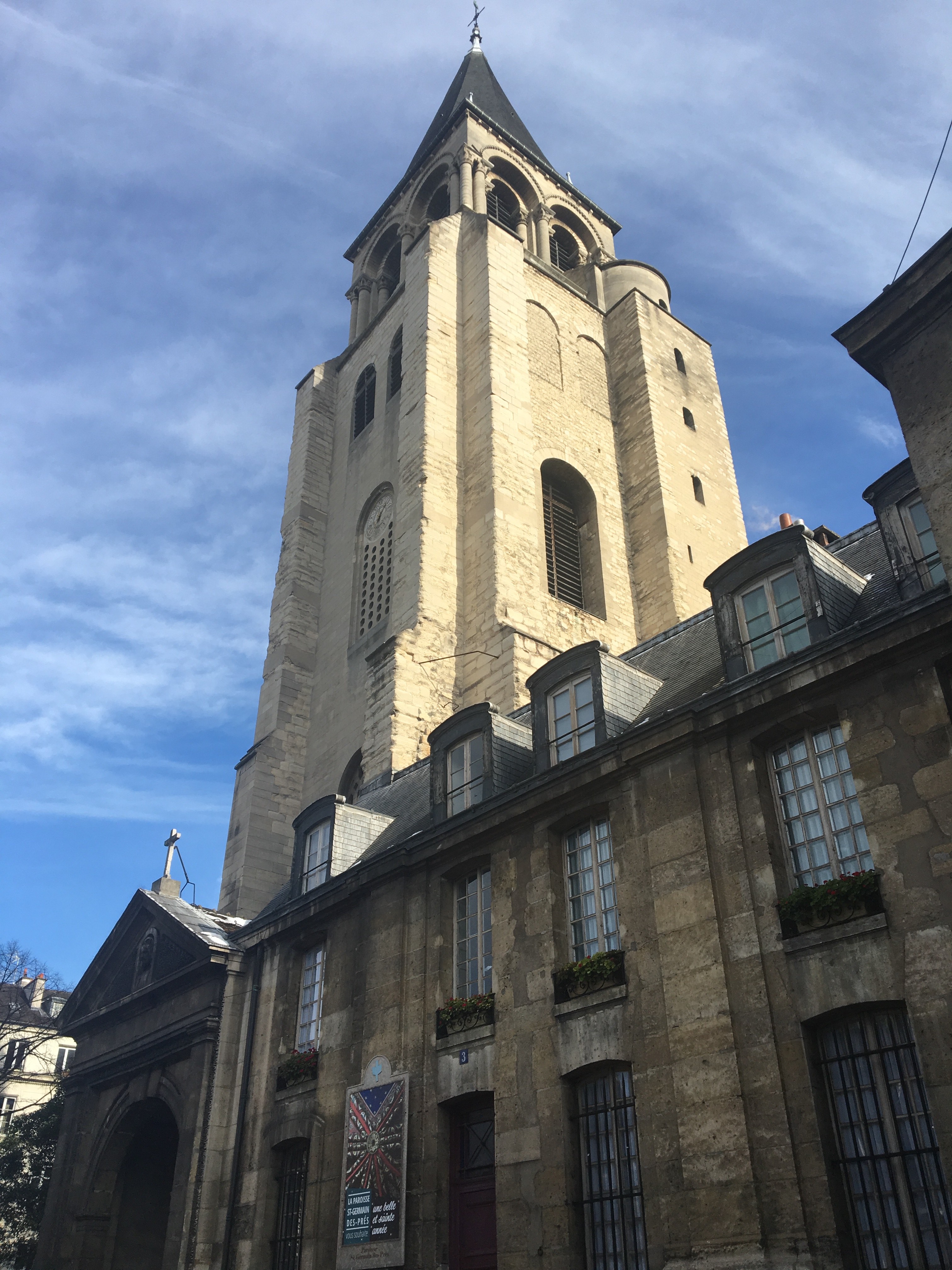 The Abbey of Saint-Germain-des-Prés.

– The Paris La Défense Arena (also known as U Arena) is the biggest multi-modal entertainment space in Europe, able to seat up to 40,000 people for musical events. 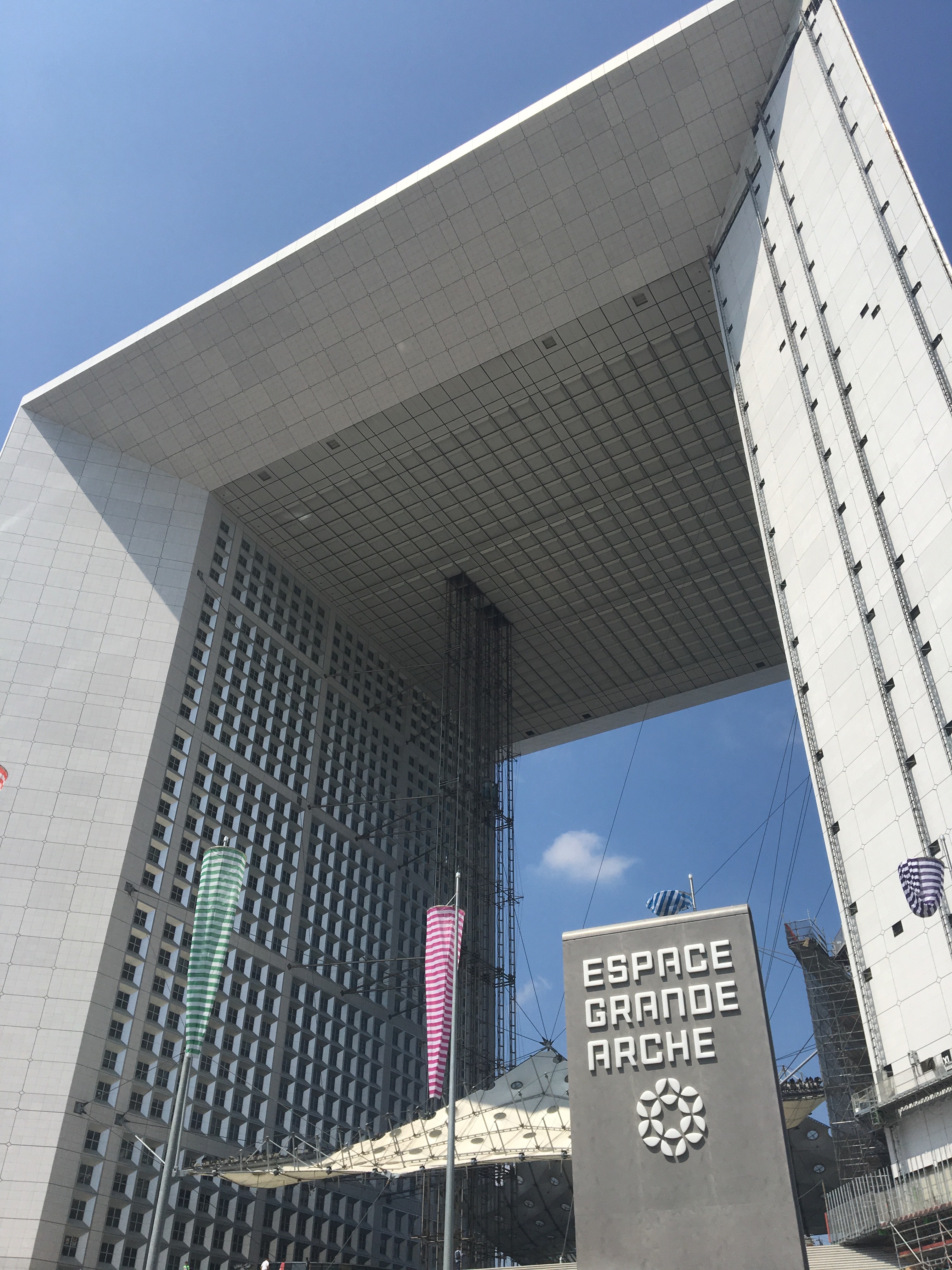 The Grande Arche at La Défense.

– Pont Neuf, which links the Ile de la Cité to both sides of the river Seine, means ‘New Bridge’, and it was so named because the construction used a new (in the 17th century!) style of bridgebuilding. 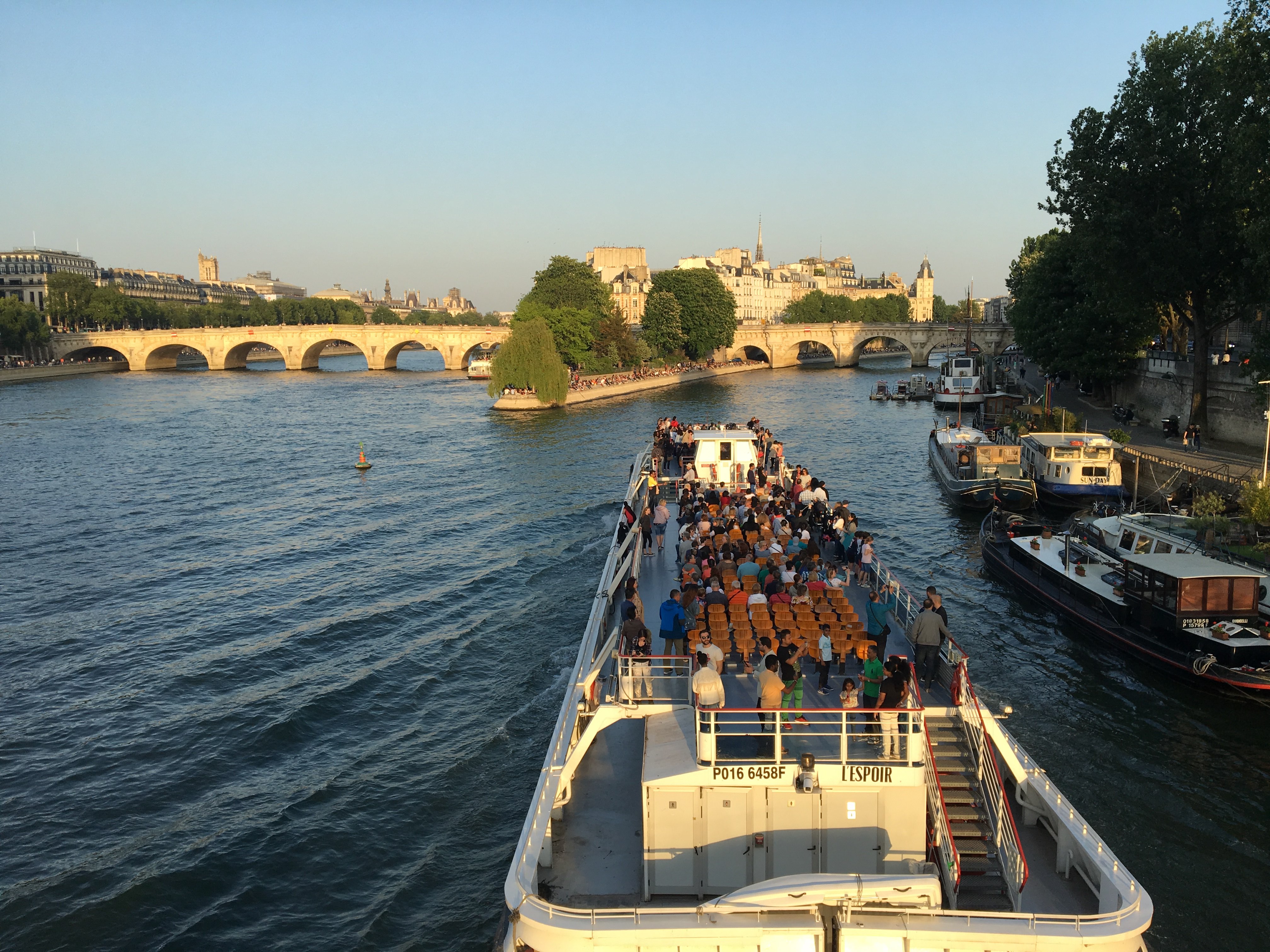 Pont Neuf at sunset, as seen from the Pont des Arts.

– The banks of the Seine on both sides have been pedestrianised since 2016 and together form a UNESCO World Heritage Site known as the Parc Rives de Seine. They are lined with cafés, bars, benches, and pétanque courts, and, in the summer, deckchairs and sun umbrellas – as the Right Bank becomes an important part of the Paris Plages festival in July and August. 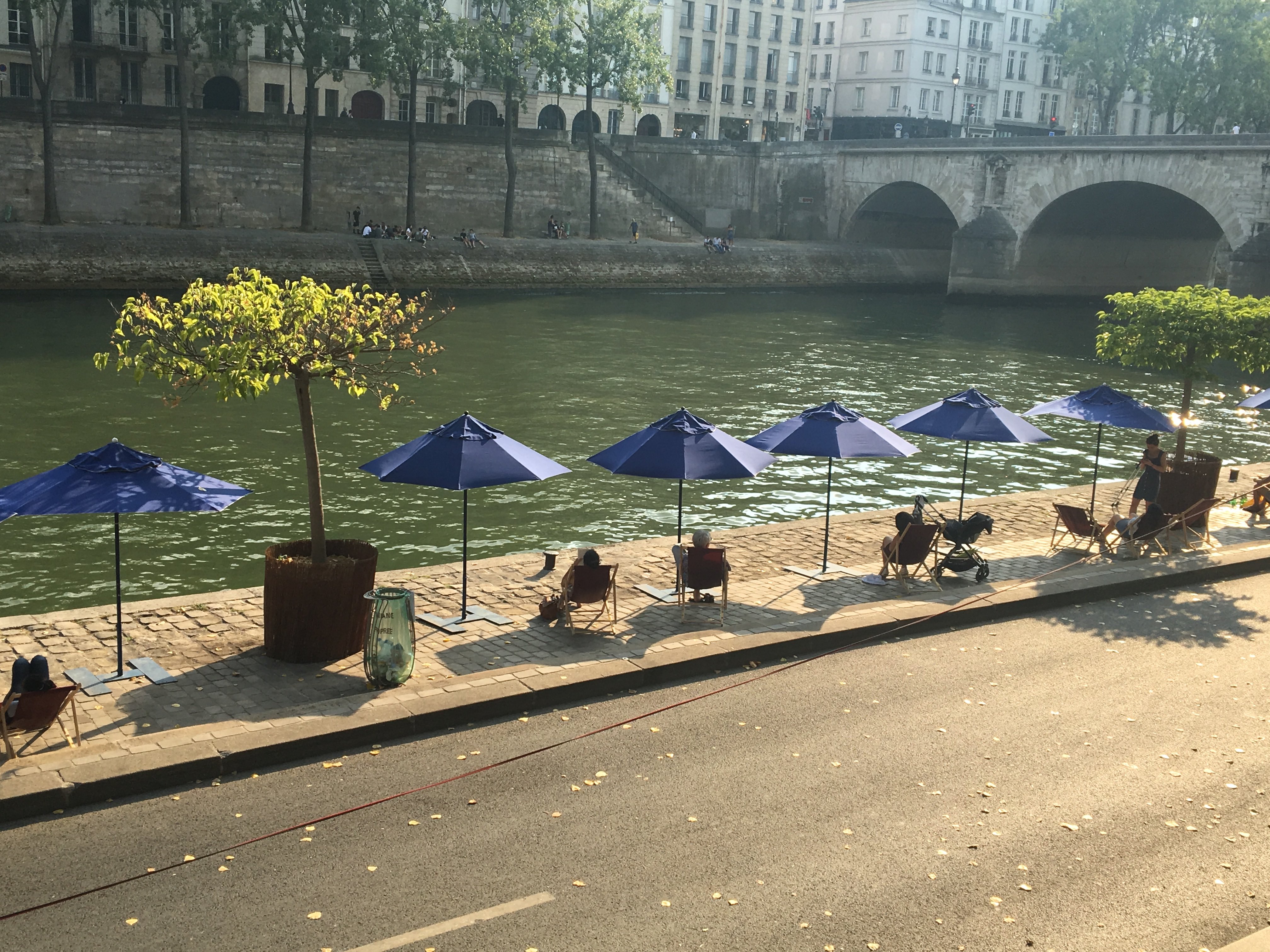 Paris Plages’ distinctive blue parasols, which line the Seine in July and August.

– The American Cathedral in Paris, an Episcopal church in the 8th arrondissment, is often forgotten about when discussing Paris’s iconic landmarks, but it is the fourth tallest church in the city, with its bell tower standing at 83m high! 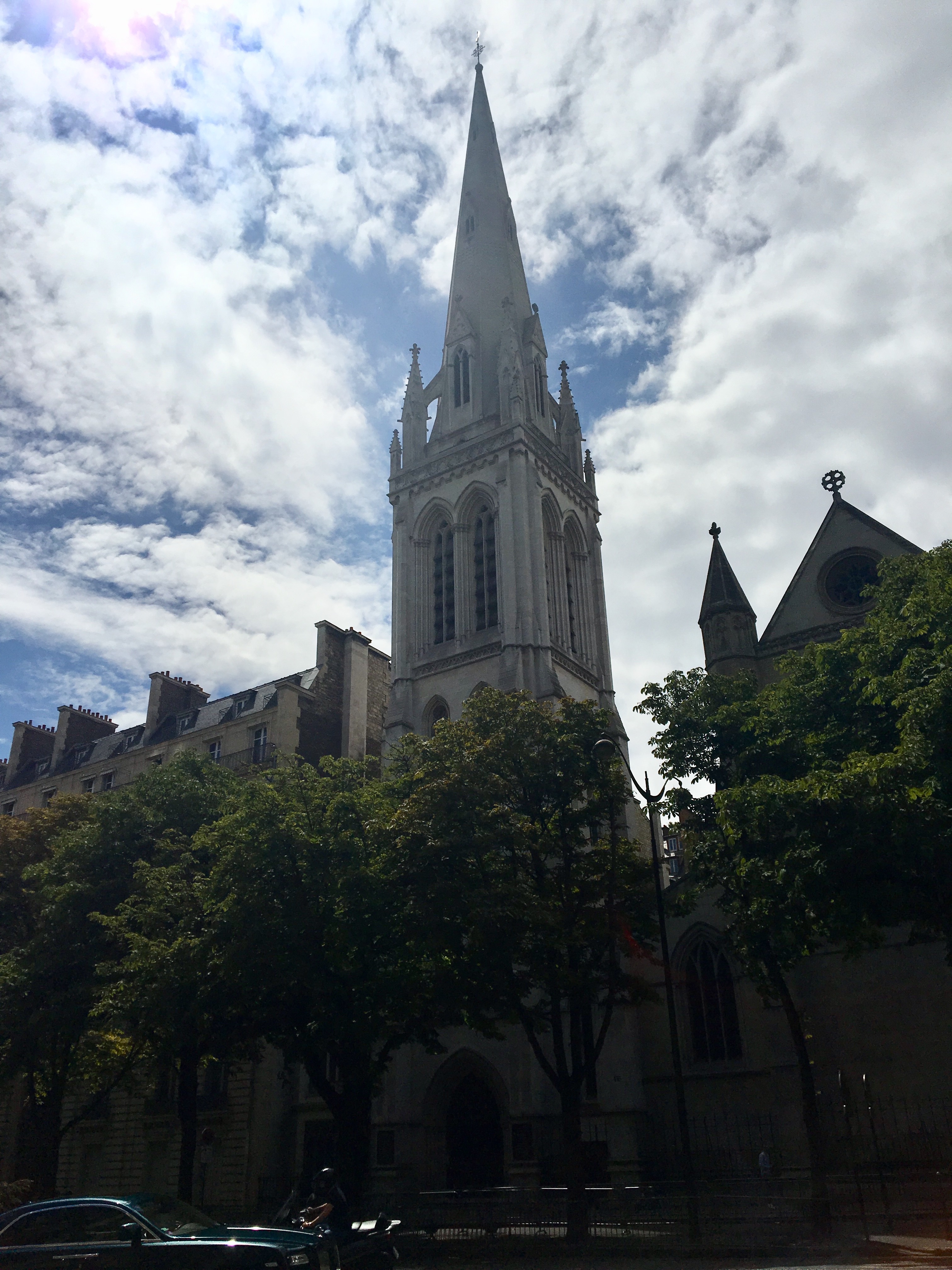 The American Cathedral’s belltower, which was built in the late 19th century.

– The immense roundabout of Place de la Bastille in the 11th arrondissement is built on the site of the state prison of the same name which was famously stormed on 14 July 1789 as part of the French Revolution. If you go down into the metro station, you can see where the walls stood as they are marked out on the platforms for Line 5. 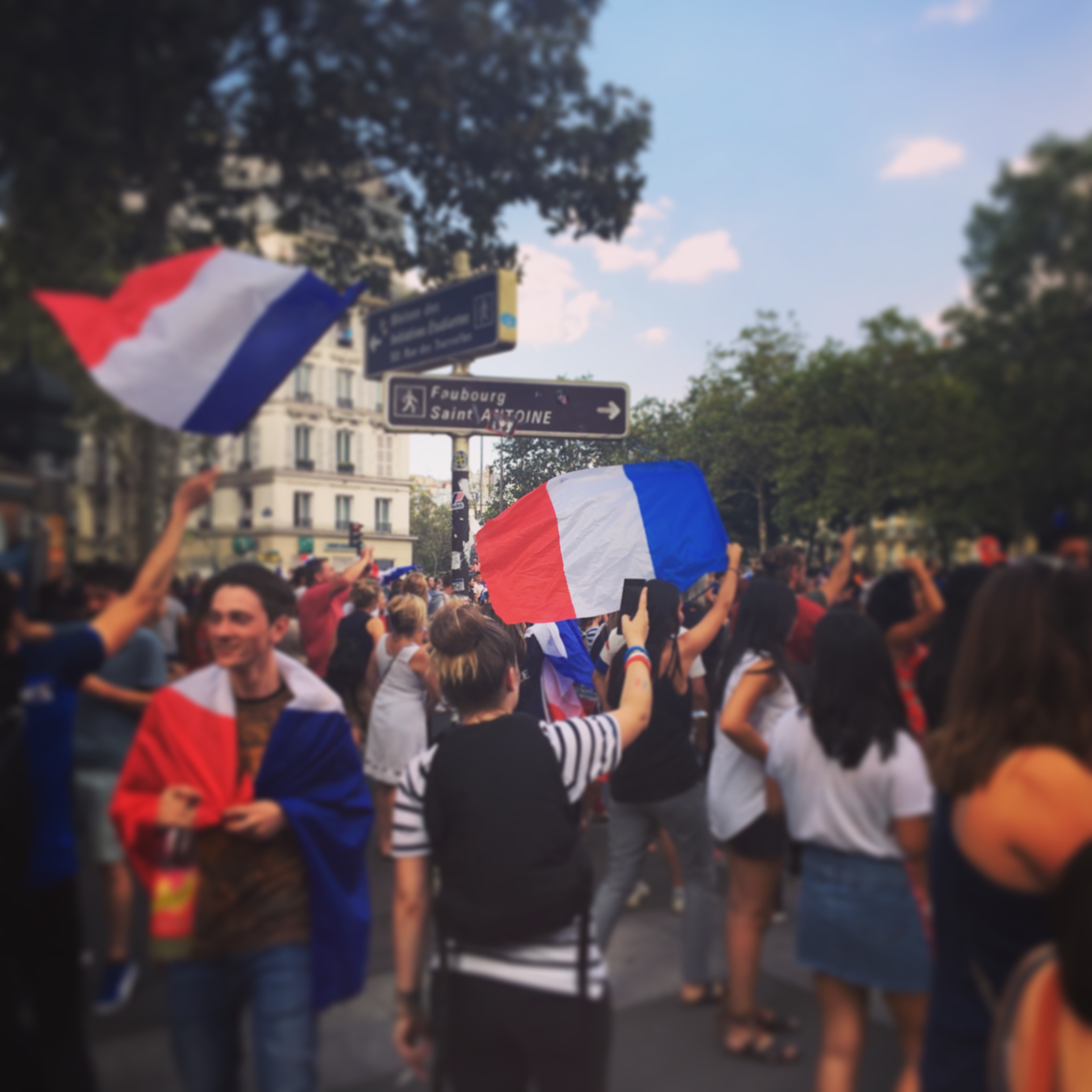 Place de la Bastille is a popular gathering place for Parisians in times of celebration, such as immediately following France’s 4-2 win over Croatia in the World Cup Final!

– The Basilica of Sacré-Coeur in Montmartre is one of Paris’s highest points, owing to its location on top of the Butte Montmartre, and can be seen from all over the city. 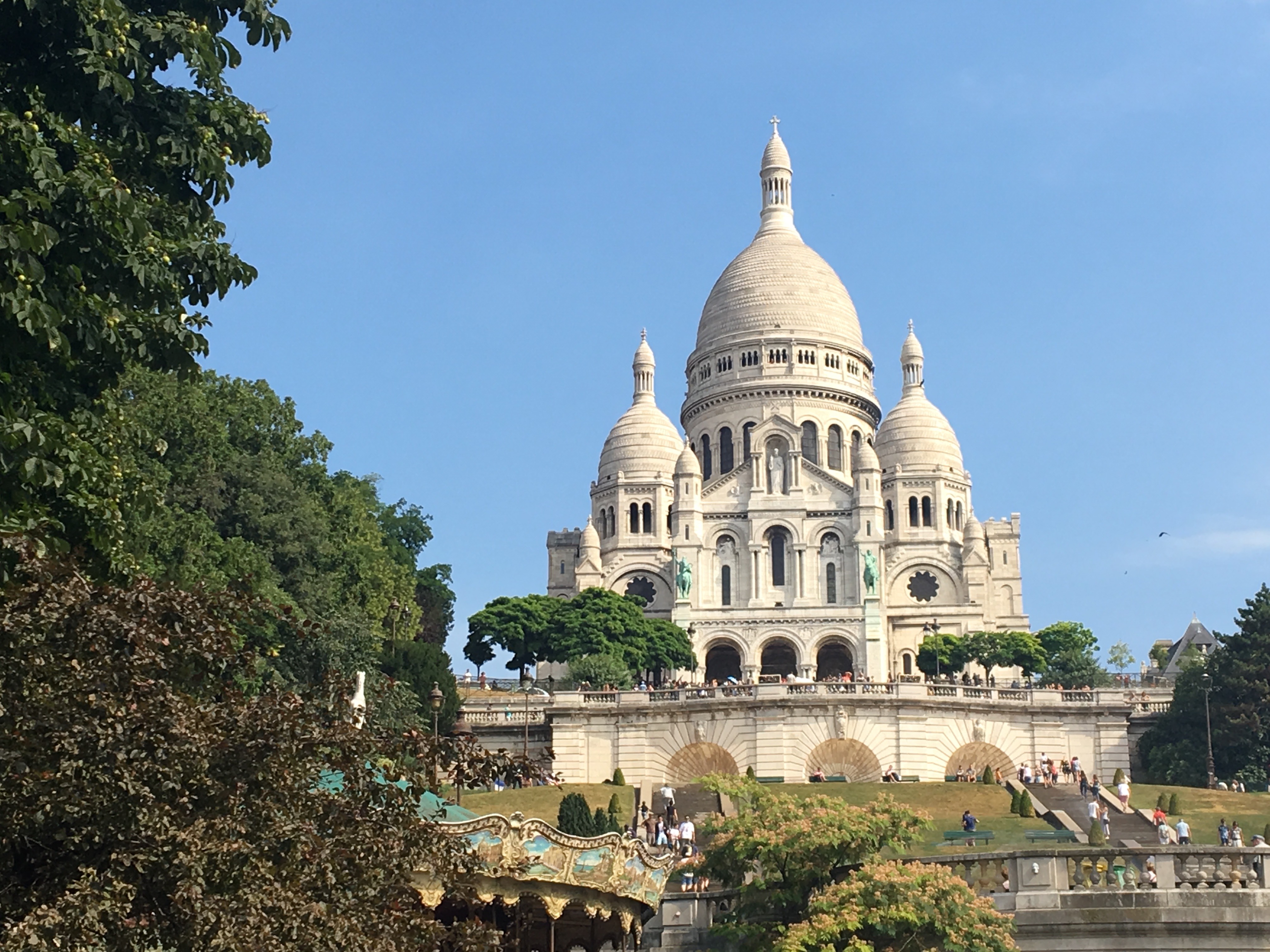 Sacré-Coeur was built in the late 19th century as national penance following a century of unrest.

I hope you found these facts interesting, or, if you didn’t, I hope you enjoyed some of my pictures!

The Best Year of Your Life