This year’s Southern Veterinary Student Zoological Symposium was held from February 26th to February 28th at Cambridge Vet School by the Cambridge University Veterinary Zoological Society, from 26th-28th. Eleven Surrey students were lucky enough to get their hands on tickets to the symposium and, after enduring the tube at rush hour (some of us may have gotten a bit lost at times!), we finally made it to Cambridge in one piece; ready to start the weekend. An introductory evening on the Friday allowed students from all vet schools across the country to meet and mingle in an informal environment before the symposium began.

The weekend was composed of talks and practicals packed over a busy two day schedule. The talks covered a wide variation of topics, ranging from a speaker on great ape mortality from cardiomyopathy to talks on avian conservation and endangered canids. An exciting day of listening to different speakers was followed by a formal sit-down dinner held at Lucy Cavendish College accompanied by what can only be described as a ‘rather eccentric talk’ from the infamous Dr. David Chivers. This involved many animal-related jokes as well as some rather interesting monkey call interpretations (yes, really!).

Practicals were held on Sunday morning, with choices ranging from a cetacean post mortem to imaging and diagnostics of exotic species. The majority of people attending opted to stay with Cambridge students over the weekend, which allowed them to experience a different vet school and form connections with people who they otherwise may not have met. Overall a fun and informative weekend was had by all, as clearly shown by the attached picture! We look forward to attending the conference again next year. 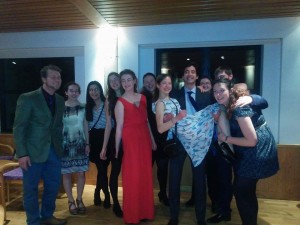 An evening with Natasha Baker MBE by Charlie Bristow