On Wednesday 4 May, The British Horse Society organised a castration and passport clinic near Tipton, West Midlands. I was fortunate to have been invited to join the team of vets, farriers and volunteers from the BHS and other welfare organisations, to observe the practices of the day; no hands on surgery for me just yet but I learnt a huge amount!

The day started at 7am when the BHS welfare team arrived on the yard, followed shortly afterwards by charity representatives and volunteer professionals. Gemma Stanford, Head of Welfare and Passports, was responsible for the organisation of the day and held the briefing at 8.30am. The lead vet for the day also gave a briefing to the team prior to 9am; the vets were all volunteers through the British Equine Veterinary Association Trust, who had kindly given up their time to help this great event.

The day was mainly based at a yard kindly lent to the BHS for the castration clinic. Nine surgical pens were erected on the yard as well as areas housing the medication, registration and holding areas for the horses. The first horse was castrated at 9am and the teams worked tirelessly until the yard was disinfected and washed down at 5.30pm. In total, 26 horses and ponies from the surrounding area were castrated, and an impressive 105 horses and ponies were microchipped and passported. Volunteers for the day included, four BHS welfare officers, seven BEVA Trust volunteer vets and five veterinary students (excluding myself) from Liverpool and Edinburgh universities. Also on hand was the local farrier Ian Russell and Dean Bland from Well Equine who had travelled from the North. Both were providing their services for a small donation and it was extremely heartening to see them chatting to the owners and giving up so much of their valuable time. As well as the BHS, other charities present were the RSPCA, Redwings, World Horse Welfare and Blue Cross, and again it was great to observe so many knowledgeable people working for the good of both horse and owner.

As well as providing owners with the legal documents, as part of the castration and passport/microchip packages, wormers were available. These were kindly donated by Zoetis pharmaceuticals and two staff members attended to administer the wormers in partnership with the veterinary advice.

Packages were offered to the owners at a subsidised cost and there was a very strong emphasis on education throughout the day. Following a verbal briefing between vet and horse-owner, each owner walked away from the clinic with leaflets containing information about the aftercare of castration and what was considered normal or abnormal in the healing process, behavioural signs to look out for as well as emergency contact details of a local vet should a problem arise. It was rewarding to see owners and families leaving the site armed with so much advice on how to best care for and maintain the health and welfare of their animals, thanks to all the support they had received at the clinic. The benefits to both horse and owner over the course of the day, were huge. 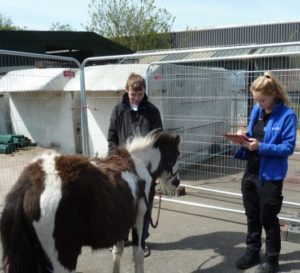 Personally, I really enjoyed chatting to some of the owners, many of whom had bought their ponies for grandchildren or other members of the family to ride or drive, some for as little as £10! I also learnt a huge amount about equine castration procedures, with the vet staff and final year students being very forthcoming with their teachings and observations. Although most castrations were performed with the animals standing up, I was lucky to see two in a dorsal recumbent position (lying on their back). This was due to one (unilateral) retained testicle, meaning that it would not be possible to remove this whilst the animal was standing. It was interesting to see the difference in procedure for this type of castration, which required full anesthesia, and so closer monitoring and assistance from vets and vet nurses.

Throughout the smooth running of the day, I was so impressed by the cheerful, relaxed environment of the clinic, as well as the huge effort put in by everyone involved. Even though the majority of vets, farriers, and other volunteers had only met that day, and for many it was their first castration and passport clinic, there was an enormous sense of teamwork, making it feel as if everyone had worked together for years! We were definitely very lucky with the weather, with the sun shining all day, attracting a record number of participants. It was undoubtedly a success for everyone involved!