In this blog, I want to explore doing research individually or in teams at our University, how we are rewarding doing research, and whether we have got the settings right on individuals versus teams. Even though we mostly do research in teams, we do not train people in team work, reward them for success as teams, and our postgraduate researcher regulations and training framework is strongly based on a paradigm of individual scholarship. And yet, we encourage, measure, and praise collaboration as never before. Something seems remiss – read on.

Most of us are already working as parts of teams

More than 75% of the more than 10,000 papers published by the University of Surrey over the last five years feature a non-Surrey author, and 54% of those feature an international author. Only 9% of our papers feature a single author. This is strong evidence that we are already working, in the main, as parts of teams, and practising one of our five core values – collaboration. 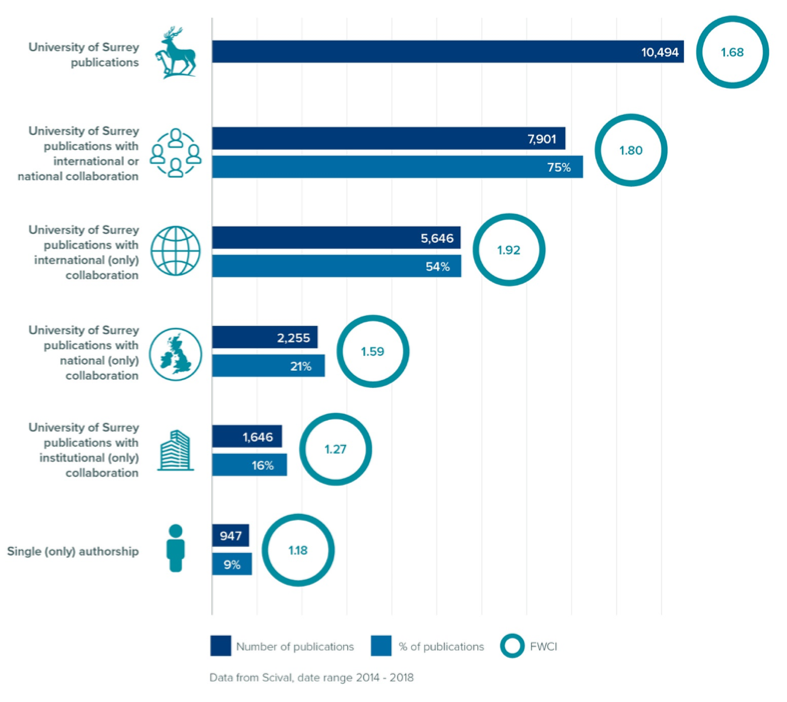 This emphasis on collaboration is perhaps not so surprising in an era where interdisciplinary problems abound – and research funders are guiding us to consider these problems, and our impact in addressing them. For some types of research, we even need colleagues from other countries and disciplines just to carry out the study. Indeed, at the “extreme end” of the collaboration spectrum are international studies in genomics, or large consortia in astrophysics or high-energy physics, in which papers regularly feature more than 50, and sometimes hundreds of authors. Extreme team work!

If you are not doing your research as part of a team, should you be?

But take a step back for a moment. Isn’t the model of research we all signed up to one of individual scholarship? ….doing a PhD on your own project, working on an “opus”, with the romantic notion in the background of “cracking the big problem” – an exercise in individualism, and undoubtedly a worthy endeavour.

Well, during and post-PhD, based on the evidence of the last five years, it seems only 9% of you, to some degree, fit that paradigm.

Is that a problem? Traditionally, in many branches of the arts and humanities, supervision signifies what might be regarded elsewhere as mentoring, with no direct input into the thesis topic, nor any co-publication involving the supervisor. To much of the sciences, this model seems foreign and difficult to appreciate. Such reactions do not invalidate this model, but do affirm that parts of the research community have moved a long way from it. Undoubtedly, there remains a place for such a model, and as a society, we should think about how funders support that. At the same time, we should question whether this model serves us currently. Some leading arts and social sciences bodies, such as the Technē2 doctoral training partnership, are starting to consider this.

But, let us put that individualism into perspective. Here is a radical proposition – most of us should work in teams because only in that way are we able to collectively make a big enough difference. We are not individually brilliant or productive enough to go it alone. Well, that certainly applies to me – sadly, I am no Einstein!

A Canadian colleague put it like this to me many years ago – we are the blocks in the pyramid, without which the pyramid cannot be completed and reach its pinnacle. Being but a building block is perhaps hard to accept, but there is some undeniable logic to it.

We need to appreciate that the system of individual researchers working on their own was conceived in an era when the research community was orders of magnitude smaller in both absolute and relative terms. As David Willetts points out in his book, A University Education, there are roughly as many academics today as there were students in the 1960s. In the late 1930s, one in every 670 people went to University. By the late 2010s, this proportion has become one in every 34 people attending University. The result has been a similar growth in the number of academics and researchers. There are relatively a much larger number of researchers today than ever before. 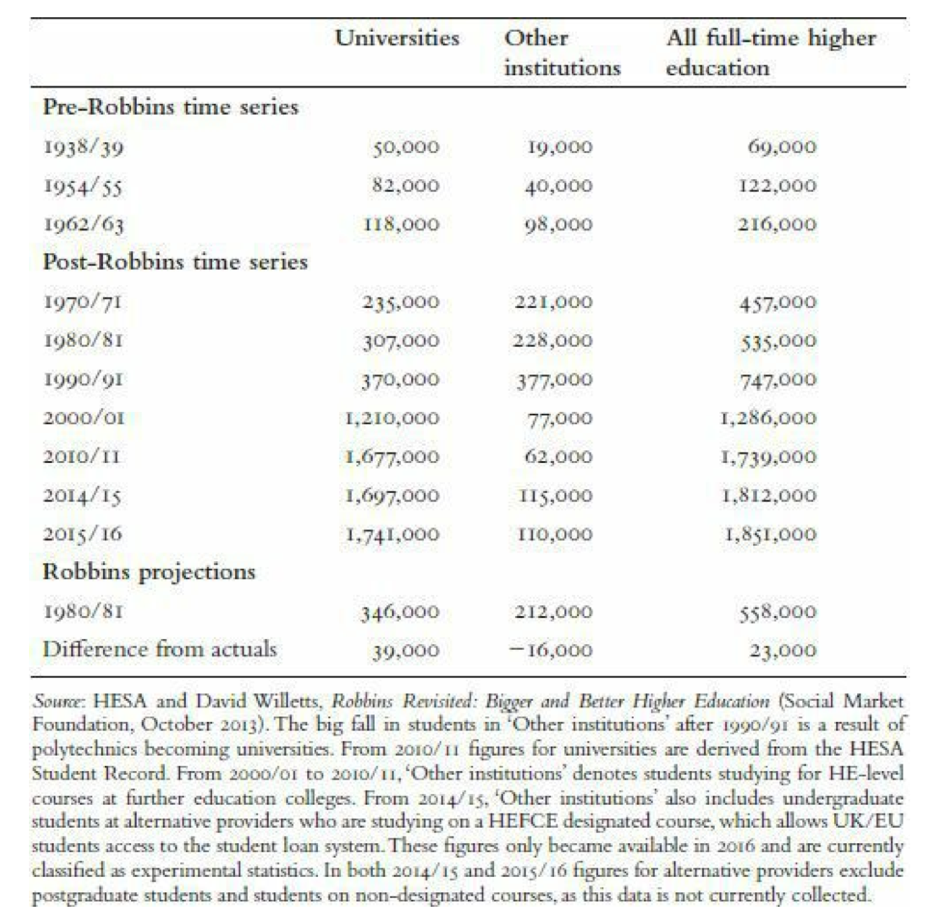 If you accept the argument that the relative proportion of brilliant individuals is no more than there ever, then, and it is largely those brilliant individuals, rather than the rest of us, who make the really disruptive breakthroughs as individuals – then is our University framework set up correctly to deal with the mainstream?

How is research done outside of academia?

Running projects everywhere else involves teams – stating the obvious! A popular model for many large companies is to run business units based on surprisingly small teams. These teams may be drawn from larger discipline-based pools and only come together for short periods and be continually re-formed. Either way, team work that cuts across disciplines to target the task is the norm and, in enlightened companies, remuneration and reward follows team objectives and performance.

If we accept team work is here to stay, are we set up to reward it?

Academic research remains a cult of the individual – epitomised by the modern trend of naming groups and labs after the Principal Investigator (especially prominent in the US). The Sampson Lab…..no doubt about what is important there! Successful individuals in this system share common traits. They are creative – have ideas, can successfully pitch them to funders, are able to assemble teams that can produce the research, and then are able to sell it to their colleagues – in short, the successful academic entrepreneur – the generalist – or in “Big Bang Theory” parlance, the Department Head.

Actually, such teams usually comprise, and should comprise, a range of types – with different personalities and different skills needed to complement one another and provide all attributes necessary. My own career has been greatly advanced by team members with virtuoso skills in experimentation, in modelling, or in analysis. Sometimes those individuals may have not had all the other skills common in a Principal Investigator, perhaps not in creative new ideas, or in writing. As a result, I have struggled to advance their careers within a framework that has only one sustainable pathway – to become a Group Leader/Principal Investigator.

Our Executive Board is practising it

Within the University of Surrey Executive Board, we have individual targets and team targets…..so, as a University, we have made a start, but this initiative does not seem to flow through to how we go about appraisal of individual academics in assessment of research and innovation. A review of the current appraisal form makes that clear – research papers, income, impact and professional contributions – all from the perspective of strictly individual performance.

If we accept team work is here to stay, are we set up to reward it and do we know how to do it?

I think the short answer is a broad no. We need to provide career paths and rewards for a greater diversity of careers in research and innovation, commencing in postgraduate research, but extending to many other aspects of research and innovation – so that we protect a wide range of skills, not just those who are able to “run the small business”.

The PhD is the archetypal training ground for Group Leaders, but modern PhDs are commonly conducted in teams, and when they are, it is often seen as being at odds with the idea of individual scholarship and the originality of the thesis. It often seems that team work is a problem when it comes to the conduct of and assessment of PhDs. Have we got the settings right for contemporary PhD studies?

Is it time to rethink how we reward teams in academia?

As ever, thanks for reading.

Posted on
July 21, 2019
Posted by
David Sampson
Posted in
Culture