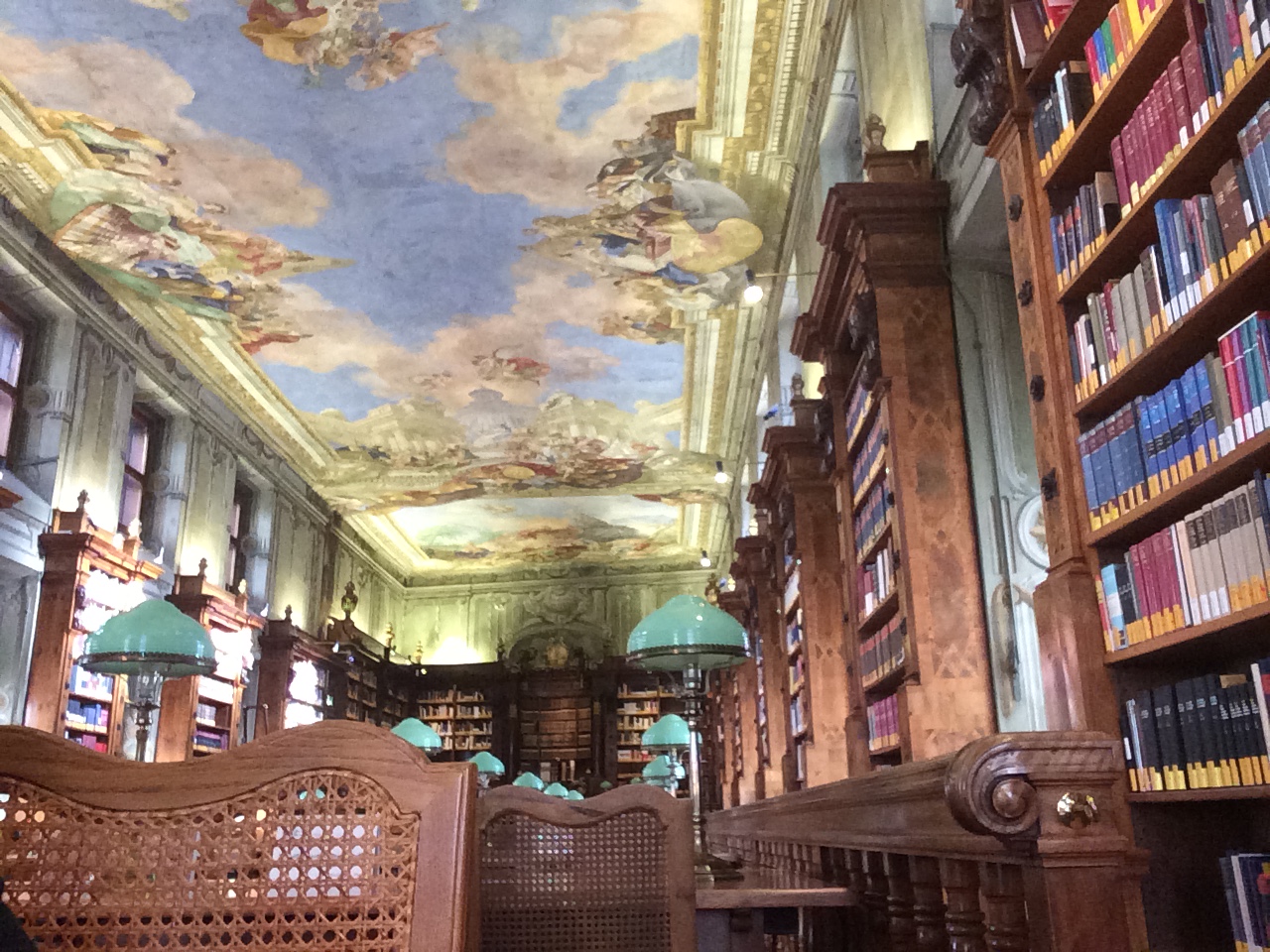 Vienna, Österreichische Nationalbibliothek, Cod. Lat. Vindobonensis 751 (the Vienna Boniface Codex), which dates to the second half of the ninth century, is one of the most significant manuscripts in the history of English women’s literary history. Included within a collection of letters relating to St Boniface (672-754) and his follower Lul (c.710-786) are some of the earliest surviving writings that can be unquestionably attributed to named Anglo-Saxon women. The Boniface correspondence is also found in two other codices: Munich, Bayerische Staatsbibliothek, Codex latinus monacensis 8112 (around 800); and Karlsruhe, Badische Landesbibliothek, Codex Rastatt 22 (mid or late ninth century). The collections in these codices are not identical and the Vienna Boniface Codex, while lacking the historically important papal correspondence found in the other two codices, contains unique copies of over 50 letters, including some relating to Lul, and, more pertinently in this context, a number by women that are not found anywhere else.

The Vienna Boniface Codex is made up of four manuscripts that were bound together sometime before the mid-sixteenth century. Alongside the Boniface correspondence, there are some books from the New Testament, a German biblical glossary, and a selection of other religious and legal material, such as some poems by Aldhelm (d.709/10), abbot of Malmesbury Abbey and bishop of Sherborne, including the only surviving copy of his Carmen Rhythmicum. Aldhelm is also known to have corresponded with women, and the Boniface correspondence in the Vienna Codex itself includes one letter from Aldhelm to a woman, Sygegyð (fol.33v). The Boniface correspondence is the first item in the codex (it appears in folios 1r-77r) and, except for the final couple of pages, it has been copied by a single scribe. The hand is a mid-ninth-century Carolingian miniscule. The manuscript, the Munich and Karlsruhe codices, was copied in Mainz (in modern-day Germany), where Boniface had been appointed archbishop a hundred years before. All three manuscripts of the Boniface correspondence are thought to be ultimately descended from a single lost archetype, with the collection found in the Vienna Boniface Codex being closer to that archetype than the versions found in either the Munich or Karlsruhe codices but significantly supplemented from the collection of original drafts and letters kept in Mainz.

Within the Boniface Correspondence in its entirety there are, in all, ten letters written by women: a letter from Ælfflæd, probably the abbess of Whitby, a letter from the nun Ecgburg, a letter from the abbess Eangyth with her daughter Bugga or Heahburg, a letter from Bugga herself, a letter from Leoba, future abbess of Tauberbischofsheim, a letter from Cneuburg with abbot Ealdhun and her fellow abbess Cenburg, a letter from Cena, and three letters from the nun Berthgyth. These letters also contain some of the earliest surviving examples of poetry by Anglo-Saxon women: verses written by Leoba, and Berthgyth. They comprise letters written by women religious in England to Boniface and his fellow missionaries in Germany, and others written by those who travelled to Europe in order to convert others to Christianity. The letter from Ælfflæd is not addressed to Boniface or his monks, but to Adolana or Adela, usually identified as the abbess of Pfalzel. In addition to Aldhelm’s letter, there are fifteen letters from Boniface and Lul to women (one of which is a joint letter from Lul and two others), which are also of considerable interest. One of these is a letter written around 716 from Boniface to the Abbess Eadburg in which he gives a lengthy account of an other worldly vision experienced by a monk of the monastery of Much Wenlock in Mercia. This letter appears in the Vienna Boniface Codex (fols.13r-16v) and in the other two codices. As I have discussed in my article ‘Lost Books: Abbess Hildelith and the Literary Culture of Barking Abbey’, in retelling this story, Boniface reveals that he overwrote an earlier version of the narrative authored by Abbess Hildelith of Barking (fl.700).

Clearly the Boniface correspondence only includes a selection of letters and many more must have been in circulation, and indeed kept, at least for a while. It is likely that the collection was put together, possibly by Lul, not simply to preserve the contents of the letters, but also for formal reasons, as a guide to letter writing. Nevertheless, the authorship of the letters was evidently important, as the collection clearly celebrates Boniface and his circle. It is noteworthy that the marginalization of the women’s letters within the collection is fairly recent. As Felice Lifshitz points out in a note in her book Religious Women in Early Carolingian Francia: A Study of Manuscript Transmission and Monastic Culture (New York, 2014, p.211 n.68), the letters to and from women occupy far more prominent positions in the Vienna Boniface Codex than they do in Michael Tangl’s early twentieth-century edition (Berlin, 1915), which is the most recent edition and is still widely regarded as definitive. Furthermore, twentieth-century translations, such as those by Edward Kylie (London, 1911) and Ephraim Emerton (New York, 1940; new edition, with an introduction by Thomas F.X. Noble, 2000) do not include all of the women’s letters, and some of the women’s letters—namely those of the nun Berthgyth–have never been published in translated form in their entirety. Berthgyth’s letters are not even included in the excellent Epistolae: Medieval Women’s Letters website. This omission is perhaps all the more surprising given that Berthgyth’s letters were discussed in Peter Dronke’s hugely influential book, Women Writers of the Middle Ages (Cambridge, 1984). It has however now been addressed by Kathryn Maude in her 2018 edition and translation. (Maude points out that the Old English scholar Christine Fell planned to include Berthgyth’s correspondence in an edition of Anglo-Saxon letters but it remained incomplete at the time of her death in 1998).

The Vienna Boniface Codex is particularly valuable because it contains all of the letters by women in the Boniface Correspondence. There are two main groupings of letters by women in the manuscript: those from Eangyth and Bugga (c.719-722), Bugga (c.720). Leoba (c.732) and Cena (c.723-c.755) appear on fols.20v-23v, while those from Ælfflæd (c.713), Cneuburg, Ealdhun and Cenburg (c.729-c.744) and Berthgyth (last quarter of the 8th century, possibly datable to after her kinsman Lul’s death in 786) appear on fols.32r-35v. Egburg’s letter (c.716-718) is the outlier on fol.64r-65r. It appears in the supplementary letters in the Vienna Boniface Codex that are found from fol.42v on. The Vienna Boniface Codex is remarkable because it contains the sole surviving copies of the letters by Ælfflæd, by Cneuburg, Ealdhun and Cenburg, and by Berthgyth. As I have explained in my article ‘Lost Books’, Ælfflæd was responsible for commissioning the earliest Life of Gregory the Great, and her letter, the earliest by a woman in the collection, is the only one addressed to another woman. The joint letter from Abbess Cneuburg is written to two abbots and a priest and alludes to the correspondents exchanging prayers for one woman for intercession for the souls of other women. Berthgyth’s letters, which I have analysed elsewhere, are however by far the most fascinating, as they describe the writer’s longing to see her absent brother, and include elegiac poetry. Even lines of prose such as ‘Oh brother, oh my brother, how can you afflict the mind of me, who am naught, with constant grief, weeping and sorrow, day and night, through the absence of your love?’ (Dronke, 1984, 30-31) resonate  tantalisingly with the later anonymous (and conceivably female-authored) ‘women’s’ elegies in Old English, especially Wulf and Eadwacer. While the letters and poems by women in the Boniface correspondence are well known to early medieval scholars, they have often been overlooked by feminist literary scholarship more broadly. This is a significant oversight: the Vienna Boniface Codex clearly represents one originating moment in English women’s literary history.