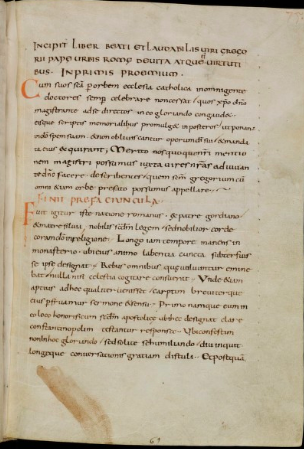 One of the challenges of writing a history of women’s literary culture is that of the anonymous text. Virginia Woolf famously speculated in A Room of One’s Own (1929) that ‘Anon…was often a woman’ (p.38) and in the succeeding decades feminist critics have sought to re-examine the evidence of authorship of a wide range of texts from different periods. For works produced in the Middle Ages, when most of the surviving texts are anonymous, the imperative to question the default assumption that they were invariably composed by men is all the greater.

A case in point is the earliest Life of Gregory the Great, which was written in Latin in Whitby between around 704 and 714. The Life is uniquely preserved in a copy dating to the first quarter of the ninth century in St Gallen, Stiftsbibliothek, Codex Sangallensis [Cod. Sang.] 567, pp.75-110.  Two scribes writing in a Rhaetian minuscule were responsible for copying the manuscript, located in one of the oldest monastic libraries in the world, that of the (now dissolved) Abbey of St Gall, which was founded in the mid eighth century. Anglo-Saxon and Irish monks were amongst those working within its scriptorium, contributing to the library’s prodigious collection. The first scribe was responsible for pp. 75-106 of The Life, while the second completed the task on two inserted leaves (pp.107-110). A third scribe then went through the text, correcting errors and omissions. 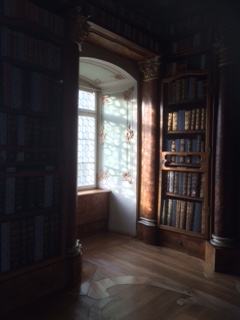 Cod. Sang. 567 is a collection of vitae sanctum [saints’ lives] and related texts, including, alongside the Life of Gregory the Great, material relating to Pope Sylvester I (pp.1-73), Hilary of Poitiers (by Venantius Fortunatus: pp.111-133), Pope Lucius I (pp.135-152), Sts Lonochilus and Agnofleda (pp.155-163), and St Martin of Tours (pp.164-170 and 172-199; including the life by Sulpicius Severus). The catalogue is published online and there is a good description of the manuscript in the edition by Colgrave, discussed below. The manuscript is made up of seven of booklets, or independent gatherings, copied at various times and locations between the early eighth and the late ninth centuries. As P. R. Robinson has noted in her article, ‘Self Contained Units in Composite Manuscripts of the Anglo-Saxon Period’, ‘the practice of assembling booklets into compilations was well established in the Anglo-Saxon period’ (p.234). However it should be noted that the material relating to St Hilary is of a similar date to that of Gregory and the two themselves may have formed a single unit of production or consumption (pp. 75-133). Whether or not that was the case, it is apparent from the Abbey of St Gall’s ninth-century library catalogue (Cod. Sang. 728) that most of these items were bound together before the end of the ninth century, creating a hagiographic anthology, presumably specifically for monastic use (p.14). This catalogue entry also confirms that, whether or not the manuscript was copied in the abbey’s own scriptorium, it was certainly held there from an early date. 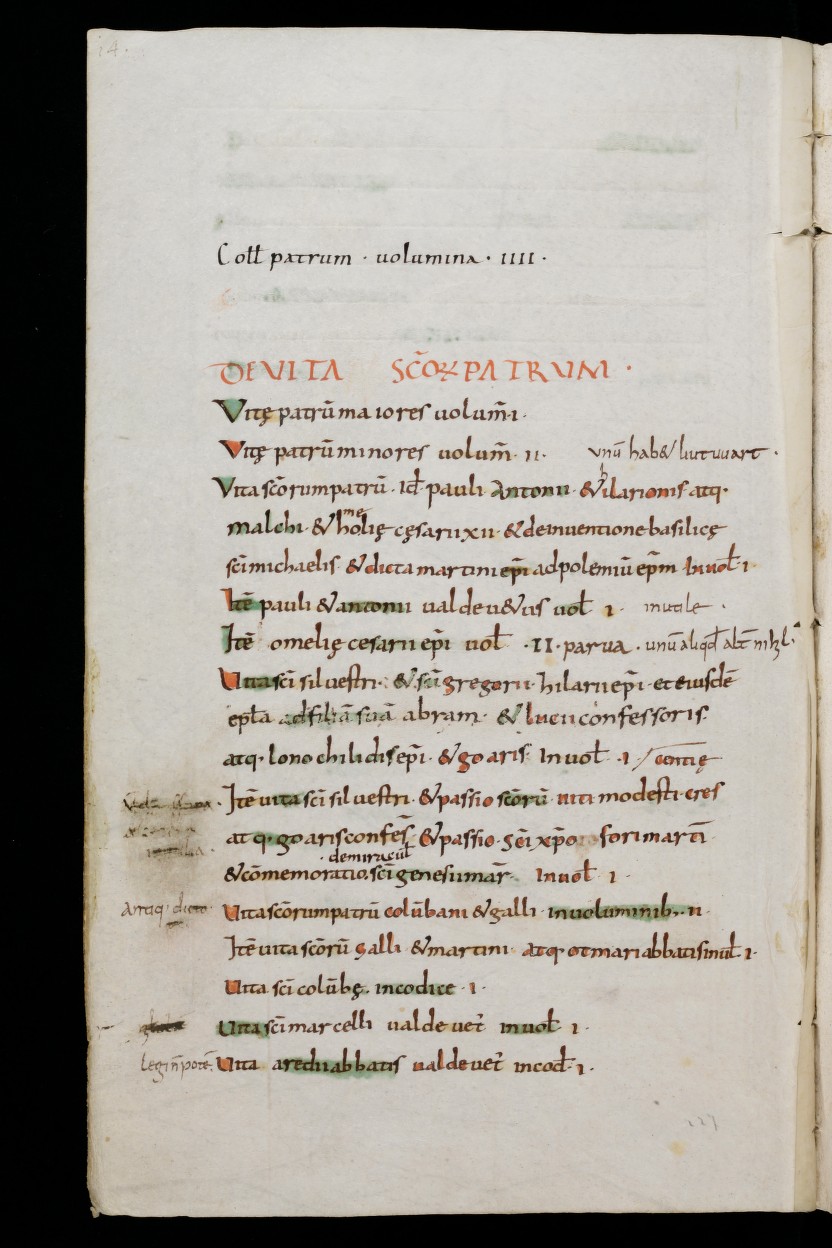 It is apparent from this catalogue that at this stage a life of the sixth-century priest St Goar was also included, although it was subsequently removed. The final two booklets which contain the material concerning St Martin were added later. Intriguingly a very faded list of contents written in a late medieval hand on the wooden front cover still includes the St Goar life, suggesting that the substitution took place when the volume was rebound in the fifteenth century. 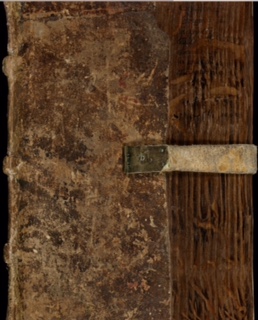 St Gallen, Stiftsbibliothek, Cod. Sang. 567, front cover. CC BY-NC. Note that the resolution is not sufficient to make visible the list of contents inscribed in the top right corner.

As a biography of the so-called ‘Apostle to the English’, the Life of Gregory the Great is absolutely central to the early English tradition of religious writing, and would have been seen as such by contemporaries. The text was edited and translated in 1968 by Bertram Colgrave, who gave it the title of The Earliest Life of Gregory the Great by an Anonymous Monk of Whitby. However Whitby was of course a double monastery, where separate communities of monks and nuns were ruled by an abbess, so the assumption that this life was male-authored is questionable. Indeed in an article published in 2012, Andrew Breeze argues strongly for female authorship of this Life of Gregory. It is perhaps more apposite to view this important hagiography not as composed by a single nun, but as produced by the community, and I made this case in my article ‘The Earliest Women’s Writing‘, which came out in 2013. Julia Bolton Holloway, in her edition and translation of extracts of the text, has also considered the possibility of female authorship, but inclines against it. Whether or not we accept the arguments for female monastic authorship of this text, this Life of Gregory the Great certainly seems to have been produced under the patronage of Ælfflæd, abbess of Whitby (654-714), who chose to have it written and who must have played a key role in shaping it to suit her own agenda and priorities and those of her community. 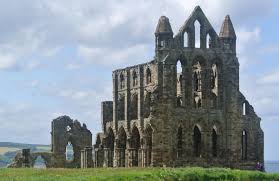 The importance of Ælfflæd to the Life is explicitly acknowledged. Rather than being named within the Life, Whitby is indirectly alluded to as ‘the well-known monastery of Ælfflæd, a most religious woman and the daughter of Queen Eanflæd, who was herself … the daughter of Edwin’ (Earliest Life, p.103). Both Ælfflæd and Eanflæd (624-after 685) are also mentioned in a key passage describing the miracles that surrounded the translation of the relics of Edwin of Northumbria to Whitby, which took place ‘while Eanflæd was still living and in the monastic life’ (Earliest Life, p.103). In fact Mechthild Gretsch, in her book Ælfric and the Cult of Saints, has suggested that the Life draws on narratives that would have previously circulated in oral form and that Eanflæd, who jointly ruled Whitby with her daughter until the 680s, was responsible for the transmission of this material to the Abbey community (pp.25-25).

One key aspect of this version of Gregory the Great’s life is that the Latin prose is extremely challenging. In fact, in his translation Colgrave goes to great lengths to produce a readable text and in the process much of its complexity is lost. This aspect of the text is examined at length in an article by Uppinder Mehan and David Townsend who defend the writer from charges of incompetence, posing the rhetorical question, ‘Can we really imagine that Whitby’s most ambitious literary production to date could have proceeded without as scrupulous a level of attention to its form and grammar as the abbey could muster?’ (p.15) Arguably, the experimental use of Latin gives the text a unique immediacy, even urgency. Such an innovative writer might well have been a woman, working on her own or alongside collaborators, who felt liberated enough from tradition to experiment stylistically and in terms of content.

Another characteristic of this Life is that it includes an apology for any mistakes and inaccuracies, acknowledging that it is not based on first hand evidence: ‘remember, we did not learn about them directly from those who saw and heard them but only by common report’ (Earliest Life, pp.131-133). The Life concludes by acknowledging that the community which produced it does not know ‘the form and fashion’ of Gregory’s death (Earliest Life, p.139). It seems that those responsible for the composition of this life are fully aware of their position in Whitby in the kingdom of Northumbria, on the very edge of Christendom, as geographically remote as is imaginable from the metropolis of Rome. It is then significant that a copy or copies of this Life of Gregory subsequently travelled from the margins back to the intellectual and spiritual centre, either to the Abbey of St Gall or another continental monastic scriptorium, where the narrative was conscientiously and meticulously copied two centuries after its original composition and anthologized alongside, inter alia, work of Venantius Fortunatus, and subsequently that of Sulpicius Severus.

One particularly significant passage in the Life, from the perspective of this blog, with its dual emphasis on women’s literary culture and the production of medieval manuscripts, is a passage directed at readers who come across errors in the text. Such readers are asked not to ‘nibble with critical teeth at this work of ours’ because it ‘has been diligently twisted into shape by love rather than knowledge’ (Earliest Life, p.129). The text misinterpreted by a censorious reader is likened to a manuscript gnawed by rodents, not digested but destroyed. Yet the act of writing is itself violent: although lost in the translation, the Latin verb used here, extorqueo, suggests a more forceful and forced movement than ‘twisted’ and something more akin to ‘wrenching’ or ‘wresting’. This might well be read as a metaphor for the challenge faced by the early medieval woman writer, struggling to produce a biography of a saint with only limited access to reliable information.

Whoever wrote the earliest Life of Gregory the Great at Whitby at the start of the eighth century had to overcome very real barriers to its composition, as was perhaps the case with all textual production in the earliest centuries of English literary history. The very existence of this text, regardless of who wrote it, tells us a great deal about the vitality of the literary culture at Whitby at this time. If, to adapt a phrase coined by Laura Saetveit Miles, in the title of her presentation at the Women’s Literary Culture and the Medieval Canon conference in Bergen, Norway in 2017, Anon was a nun, then the very existence of this innovative and original work is all the more remarkable.

Women, Writing and Religion is forthcoming from Bloomsbury in December 2019!