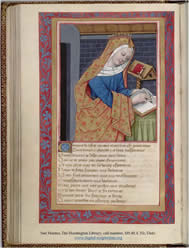 The Book of Margery Kempe is often positioned at the beginning of the English tradition of medieval women’s writing, as a point of origin, whereas the vernacular English canon more broadly is seen to have a much earlier genesis, dating back to the seventh century and Caedmon’s Hymn. Despite evidence of English women’s engagement in a vibrant literary culture in Latin and subsequently French from the early Middle Ages onwards, the relationships between The Book of Margery Kempe and its literary antecedents are still relatively unknown or unexplored. Without suggesting any sort of direct influence on The Book of Margery Kempe itself, this paper will unravel some intriguing parallels with texts associated with some of the earliest women writers in the English tradition, such as the letters of St Boniface’s women correspondents, and Hugeburc of Heidenheim’s Hodoeporicon [or voyage narrative] of St Willibald (written c.778-780). The paper will conclude by considering what is to be gained from examining the continuities, and indeed the discontinuities, in women’s literary culture across a broad historical sweep and across distinct literary periods.

Women, Writing and Religion is forthcoming from Bloomsbury in December 2019!

Forthcoming Event: Crisis, Gender and the Politics of Time in the Medieval and Early Modern Periods, University of Southern Denmark, Odense, November 5-6, 2019