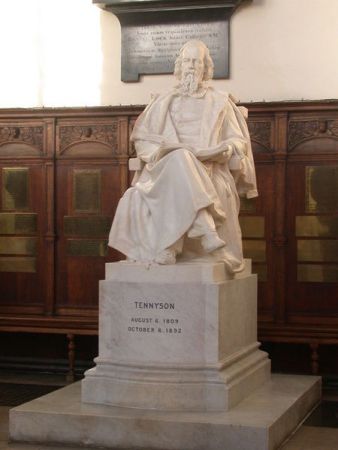 James Bond and Alfred Tennyson seem like an odd pairing. In their own ways, though, they’re both British institutions, old-fashioned and perhaps outdated. They might be loved or tolerated for their place in cultural history, but, arguably, they’re not immediately relevant to twenty-first-century concerns.

This issue is directly addressed in the latest 007 film, Skyfall, in which Ian Fleming’s spy and the Victorian poet laureate are brought together. As Bond (Daniel Craig) runs through the streets of London to stop an assassin gunning for M (Judi Dench), the under-pressure head of MI6 is fighting for her job in front of a parliamentary committee, and she concludes her speech of self-justification with a defiant quotation from Tennyson’s dramatic monologue ‘Ulysses’:

We are not now that strength which in old days

Moved earth and heaven; that which we are, we are;

One equal temper of heroic hearts,

Made weak by time and fate, but strong in will

To strive, to seek, to find, and not to yield.

Although the sonorous determination of these lines has been admired by politicians since the poem was first published in 1842, there is an irony to their use here. Unlike M, Tennyson’s Ulysses is trying to resign his post: he yearns to escape his responsibilities as king of Ithaca and embark on one last voyage with his mariners. Although he insists that he remains ‘strong in will’, he also acknowledges that he’s no longer fit for office.

These lines from ‘Ulysses’ seem to have been everywhere in 2012. As well as their Bond cameo, they were inscribed on a wall in the athletes’ village at the London Olympic Games, and the last line in particular became a sort of unofficial Olympic motto. Quoted again and again over the course of the summer, Tennyson’s words were bound up with ideas of fortitude, endeavour, and patriotic pride. Skyfall deploys them to similar effect, but the quotation also crystallises a sense of doubt and melancholy that pervades the film.

For much of Skyfall, Bond and MI6 are presented as dinosaurs struggling to keep up with the modern world. Under attack from a cyberterrorist, they are forced to retreat into the subterranean tunnels of Winston Churchill’s World War II cabinet rooms. The film persistently reiterates the possibility that Bond and the intelligence service might be past their best: at one point the spy stares intently at J. M. W. Turner’s painting The Fighting Temeraire, depicting a once-famous warship as it is towed away to be broken up.

Skyfall is, on one level, a film about the loss of British power: the plot hinges on an incident which took place during the 1997 handover of Hong Kong from British to Chinese control, and the film’s villain (foreign, of course), played by Javier Bardem, delights in telling Bond that the days of British power and imperial glory are long gone. The lines from ‘Ulysses’ perfectly encapsulate this concern. Like Ulysses, Skyfall wants to have it both ways: it recognises that Britain has been ‘made weak by time and fate’, but it also clings nostalgically to a myth of fortitude and heroism. As M intones the words ‘and not to yield’, Bond arrives to save the day. 007, of course, will never yield. This is a big part of the character’s appeal, but it’s also one of the reasons why these films often seem reactionary and simplistic. In every film, no matter how outdated Bond is, he will strive, and seek, and find: Britain’s enemies will be defeated, and the plot will be resolved.

Tennyson’s Ulysses, however, never reaches the end of his story. Despite his self-proclaimed strength of will, at the close of his monologue he remains, as the Victorian critic Goldwin Smith noted, ‘a listless and melancholy figure on the shore’. He is stuck in a sort of limbo, looking back on the fading glories of the past and facing an uncertain future. This is a peculiarly Victorian state of mind, but, according to Skyfall, it might also be characteristic of twenty-first-century Britain.

English Literature in the Workplace: The Professional Training Year