Imagine you’re in a bar, earnestly engaged in an ethics-related discussion, when a man sidles up to you and says: ‘All this talk about ethics is just nonsense. It’s all a matter of opinion and there are no rights or wrongs.’

How would you respond? Would you like a one word answer?

Or maybe you’d like to tell him about the Sankofa bird? Read on…

I’ve now more or less figured out the geography of the campus. I’ve located the eating places (student cafeteria not unlike a cathedral), university museums and gym. I’ve met some of the impressive honours bioethics students and been shown how to shake hands the American way (firmly not flimsy).

I’ve  also worked out the pedestrian route to Tuskegee city centre. The city has a population of about 10,000 and a recent census showed that 95% of the population is Black/African American. The area has a rich and harrowing history with at least three significant episodes relating to Tuskegee University.

The Good, the Bad and the Unforgotten

The first involves the setting up of the ‘Normal School for Coloured Teachers at Tuskegee’ by former slave, Lewis Adams, in 1881. He recruited the inspirational Booker T. Washington, famous for his groundbreaking 1901 book ‘Up From Slavery’. George Washington Carver, came to head up the agricultural department and took resources to local farmers to help them improve their practice. Both men made significant contributions to education, research and innovative practices. The School evolved into Tuskegee University in 1985 and became a centre of excellence in, for example, aerospace engineering and bioethics.

The second episode began in 1932 when the U.S. Public Health Services recruited 623 African American men from the Tuskegee area to take part in a study to research ‘the effects of untreated syphilis in the Negro male’. The research ‘subjects’ were not told the truth as to what the study was about nor were they offered treatment when antibiotics became available in the 1940’s. The study was not exposed until 1972, by which time many men had died and had passed on syphilis to their partners and children. In 1997 President Clinton apologised on behalf of the nation and awarded a grant to set up a bioethics center at Tuskegee saying: ‘the center will serve as a museum of study and support efforts to address its legacy and strengthen bioethics training.’ The word ‘legacy’ is central to the activities of the Tuskegee bioethics center 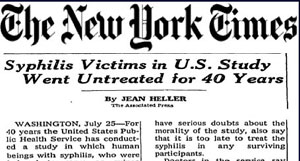 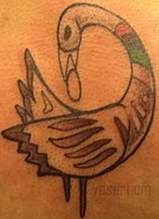 The center logo, the Sankofa bird – a ‘mythic bird that flies forward while looking backward with the egg (symbolising the future) in its mouth’ – represents beautifully its ethos. There is a strong sense of responsibility and orientation towards not forgetting the injustices and exploitation of the past and looking towards a future where bioethics is as real as the activities of Washington and Carver: engaging with the community, teaching and conducting research that addresses the real concerns of African-Americans and those who are underprivileged.

So back to you and the man in the bar…..

I’d love to know how you said you’d respond so do email and tell me. You can, most likely, guess the one word response I am suggesting to refute the man’s view? It’s ‘Tuskegee’. There are clearly ‘rights’ and ‘wrongs’ and ethics is not just a matter of ‘opinion’.

This week I’m off to Kansas to a conference entitled ‘Journey to the Center of Bioethics and the Humanities’. So will that be ‘over the rainbow’ I wonder? More next week.