The last night of 2014 and the first morning of 2015, this New Years Eve was one of the best ones I have ever had. It was my first New Year’s away from family, and it was hard because traditionally New Year’s Eve would be spent in church with all my family members, and proceeds with a cake cutting at home. This year, being in England, I decided to spend New Year’s with my friends and see the infamous fireworks display at the London Bridge. Apart from the previous years, this year we had to purchase tickets online to view the firework, which was unusual, as I have never purchased tickets before to watch fireworks anywhere else. As this event is one of the biggest in the whole of Europe, we decided to attend it no matter what.

Different underground stations all over London were assigned to act as entry points, and we could enter only from the particular point mentioned in our ticket. As thousands of people would be visiting the area, we had to arrive 4 hours earlier to the entry point in order to form the queue and secure a place on the London Bridge to view the fireworks. We were amazed to see the huge number of people rushing through the entry gates, old and young alike. We also didn’t fail to notice the number of international people coming through the gates, and especially Indian people.

After a 4 hour long wait in the freezing cold we started to regret coming to this event, as we could not feel our toes after a while. But, the feeling changed into excitement as the countdown started and found ourselves screaming along with it. 2015 commenced with the amazing firework display around the London Eye overlooking the river, which was mesmerizing to the eyes. It was rhythmically coordinated with music which made it even more wonderful. The fireworks went on for about 15 minutes and concluded with the song Auld Lang Syne, which the people sang along with the music. 2015 officially began and we hugged each other and wished Happy New Year with all of our hearts hoping for the New Year to bring peace and happiness all around the world. 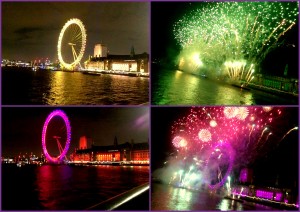 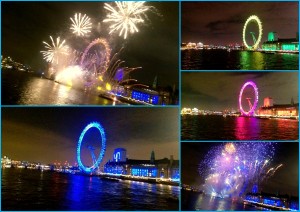