Yesterday one of my childhood dreams came true! I climbed the Elizabeth Tower and watched Big Ben be struck 12 times for the midday bells. When I was younger, I had a dream about climbing the tower, but was too small to walk up the steps. Since that dream, I have always wanted to climb the tower. My road to climbing the tower begun a year ago.

I was looking up various tours around London and found out that you could actually go inside the tower. I had never met anyone who had climbed it before, so didn’t even know if it was possible. I found out that you had to email your MP (member of parliament) to request a tour. I wrote Anne Milton, Guildford’s current MP, to tell her that I had always wanted to go and I was a student at the University of Surrey. She (or more likely her aids) replied to me quite quickly to ask me my availability and some details. I told her that I was available at any point. The website stated that the waitlist is about 10 months long, so wanted to increase any chance I had to go up sooner rather than later. After that she would get back to me closer to the date that is available, so that my guest and I could undergo a background check. Fast forward to 11 months later, the background check was passed and I climbed every one of the steps to the top.

The tour began in the Portcullis building across from Big Ben. We had to go through airport security and lock away all our belongings, including our phones and cameras as no photography is allowed. After we walked through a tunnel that crosses under the road from Portcullis to Big Ben. This is a tunnel that is used by the MPs to get from one building to the other. We walked in the courtyard of Westminster (where parliament is held) that is blocked off by a fence and into Big Ben.

We went up about a hundred steps to the first room along the tower. The rooms are in a U shape around the center shaft of the tower. In the shaft, three weights are held which control the bells and timing of the clock. In our first room, we learnt about some of the history of Big Ben and who created it. When the clock was commissioned by parliament, one of the main requirements was that the clock had to be accurate to within a second. For a clock of this magnitude, keeping it that accurate is very difficult. Clock makers entered a competition to solve this problem and succeeded! More on how they keep it accurate later.

In the next room, we saw behind all four clock faces. It was incredible. The sun was shining brightly on the face that points toward Westminster/Parliament, so we could see the second-hand move along the face of the clock. I put my hand up to the glass of the face. It was just breath-taking. Behind the clock are a set of very powerful and energy efficient light bulbs that are specially made for the clock. Originally, however, before electricity was installed into the tower, the clock was lit by gas lamps and a man would have to climb around on the wall behind the clock face on metal pegs that stuck out of the wall.

The third room held the mechanics for the bells and rotating the clock hands. Here big rolls held the wires that suspended the weights. We watched as the time was kept constant and the quarter to 12 bells be rung. About twice a month the clock engineers must calibrate the time. To do so, they call 123 which holds a very amusing thing called the “Speaking clock”. This was used frequently many years ago for people to check the time. It was linked to Greenwich that lies on the prime meridian (the center point between east and west) as the source of the time. Now they use the National Physics Laboratory in Teddington who have an atomic clock. This clock is linked to the Speaking clock. When the clock engineers are in this room, they call the speaking clock to get the time. To adjust the clock, old penny coins, from the time when shillings were used, are placed on the pendulum that keeps the time. Each coin added or removed affects the time over a 24 hour period by half a second. With these measurements, they can keep the clock constant. Finally, we went up to the very top and saw the man himself: Big Ben. That name is not an understatement. He is huge. We walked along the perimeter of the bell to where the hammer struck the bell. This Big Ben is surprisingly not the first. There was another however it cracked as a bigger and bigger hammer was used to get the desired note E natural. The hammer was half as much again too heavy for the bell. There were big debates and a court case about who was to blame for the cracking of Big Ben. In the end, another bell was made and paraded through the streets. The bell was actually just made right outside the house I live in now at the Whitechapel Bell Foundry. Established in 1570, it is the oldest listed building in England! Unfortunately, the business has been sold and it is unsure about what will happen to it. Since Big Ben (2.0) has been in place, it has only been moved once. A hairline fracture in the bell developed and engineers got together to try to stop the fracture from spreading. Two holes were added on top and bottom of the fracture and the bell was rotated 45 degrees. Now the hammer hits the almost 14 tonne bell in the same place every day for the last 150 years and will continue to do so for at least a hundred years. 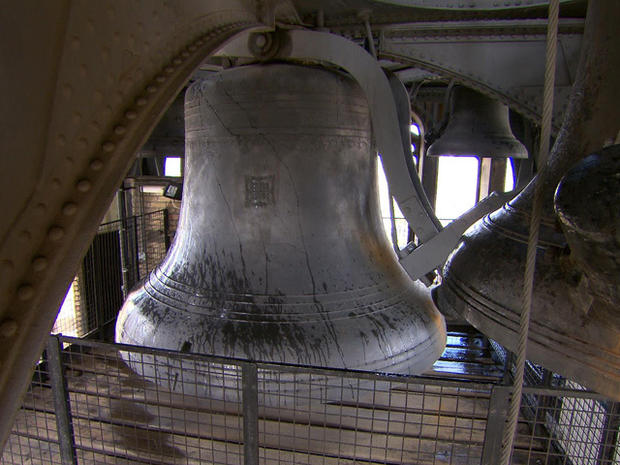 To conclude the tour, we were able to listen to the midday bells right in front of our very eyes. There are several bells at the top of the tower with different sizes. One of the oldest bells, is hit with two hammers because it needs to sounds twice in quick succession that only one hammer wouldn’t be able to keep up. Now knowing me, I wanted to hear Big Ben with my ears unguarded…I did and it was LOUD! I quickly blocked my ears, but the bells are so loud that you could very easily hear it. It was a very special moment to see this hammer hit the world-famous bell that creates the iconic sound which rings across the area. I felt honoured to watch this bell do its job. The craftsmanship, the history, the love that the clock engineers give it made the whole experience something to be cherished.

I highly recommend you apply to see Big Ben as soon as you arrive. You may not be able to see it until your final year, but boy was it worth it. It was such a humbling experience. Otherwise, you can also email your MP to request tours of parliament. You can tour parliament normally for about £20, but if you request through your MP it is free!