It has been exactly one month today that I began my new role of Archivist (Public Services) and so to celebrate (!) I have decided to write a blog post about some of the many interesting things I have been up to.

So, where to begin? My role covers a huge variety of responsibilities, one of the things that attracted me to it in the first place. These include: enquiry service provision, management of researcher access to our diverse collections and issues related to this, and outreach and engagement work, including tours, inductions, displays and exhibitions. It’s been a busy whirlwind of a month but here are just a few highlights: 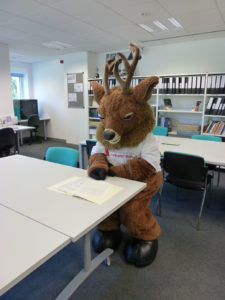 Supervising and helping visitors in the Research Room is a large part of what all the Archives team do. But in my very first week I found out, unexpectedly, that it isn’t just helping and supervising researchers, though my brief time here has already included precisely that. No, it has also included the supervision of film-making within the Research Room. In the space of one week, I supervised both Steve the Stag, the University mascot and Professor Max Lu, the University of Surrey’s new Vice-Chancellor, being filmed in the Archive Research Room. Steve was being filmed as part of the Library’s Welcome Week video in order to highlight the Archive and its location in the Library building. Professor Lu on the other hand had a more, shall we say, professional entourage, being filmed as he was as part of the 50 years of Surrey celebrations. Both were equally entertaining!

With reference to the aforementioned 50 year celebrations my role has seen me assisting Marketing on the production of both a film and a book they are compiling to celebrate the 50 years from the signing of the University of Surrey Charter. This has involved ploughing through numerous boxes of uncatalogued photos, scanning required images, and beginning to learn the minefield that is copyright in the archive profession. 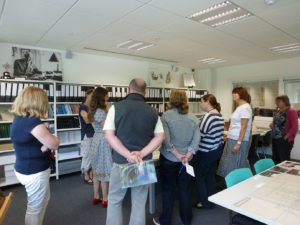 A major highlight under this category was preparing and conducting a tour and putting together a display for the Heritage Open Day that was celebrated at the Archive on 8th September. It was a fabulous opportunity to completely immerse myself in our diverse collections and I spent a happy few hours browsing through everything, from construction photos from the 1960s, through to costume design books, via delightful illustrations of Winnie-the-Pooh, Punch and other E. H. Shepard material from the collections. This also involved creating promotional material for the day and disseminating it, creating the display and tour “script” along with display labels, and an introduction to the social media that the Library has accounts for. The day itself was a great success and a nice opportunity to meet some really interesting people.

Lastly has been the Battersea Showcase event held on 16th September. Hosted by the Alumni Office, the Archives & Special Collections’ role was in putting together a large display of material from the Battersea Polytechnic days (our predecessor) and then helping on the day with showing approximately 280 attendees our collections, answering questions and generally talking about their experiences of their time at Battersea. It was a big event, with press coverage no less, and really showed off what the team could do. Look out for a further blog post about this… 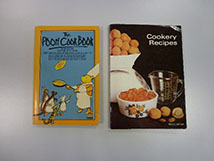 From tweeting to promote displays, Heritage Open Day tours, and University Open Days, to instagraming pictures of The Pooh Cook Book and photographs from the University Archives, the whirlwind that is social media has proved to be exciting as well as surprisingly demanding. Who knew there were so many National days you can tap into in order to promote your collections?! It is, however, incredibly worthwhile – 700 people followed our Heritage Open Day talk and tour on Snapchat – that’s 700 people who potentially didn’t know we had an archive in the first place!

Of course the above doesn’t include all the other things I’ve had the opportunity to be involved in: statistics collecting, cataloguing, reviewing processes and practices around reprographics, preparing materials for induction sessions with students, involvement with Surrey Open Days (another display), creating yearly schedules for social media and Research Room displays … and the list goes on.

So, four weeks in and I can honestly say I am thoroughly enjoying my new role. It’s hard work but it’s also dynamic, challenging, fun, and surprising. It’s a small but happy team, and one I’m very pleased to be part of.