Having heard the sad news that Geraldine Stephenson passed away on Christmas Eve, 2017, we would like to pay tribute to a truly lovely lady who we had the pleasure to know and work with.

Geraldine Stephenson (born c. 1925) was one of a core group of artists and apprentices who trained with Rudolf Laban at the Art of Movement Studio (Manchester) in its early years and who then worked with and developed his theories and methods in a specific direction. She was a dancer, teacher and producer but became best known for her role as a movement director/choreographer in theatre, TV and film; she is believed to be the first person credited for such a role.

Geraldine was introduced to Laban’s work whilst studying at Bedford College, where she qualified in Physiotherapy and as a Teacher of Physical Education. She attended a Modern Dance Holiday Course in Sheffield during Christmas holiday 1945-1946 which had Effort training as its central theme. Taught by Laban, Lisa Ullmann and devotees such as Diana Jordan, Sylvia Bodmer and Betty Meredith Jones, the course left such an impression that Geraldine enrolled as a student at Art of Movement Studio in September 1946, the studio’s first year.

Geraldine first encountered teaching acting students in 1948 when she was sent to Northern Theatre School Bradford in Laban’s place. The school was founded by actress and director Esmé Church who had invited Laban onto the staff as she recognised the value of his dynamic work to acting students. Laban had an ability to identify qualities in his students and young teachers and then encourage them in that direction, often throwing them in at the deep end as he did with Geraldine teaching acting students. But he recognised her dramatic qualities in performance and saw her potential – taking her on as his assistant at Northern Theatre School for 5 years.  After the trepidation of teaching her first sessions, she was impressed with how the students responded to Effort training and improvisational work.

In 1951, Laban gave Geraldine a further opportunity by putting her forward to choreograph for the York Mystery Plays (revived for the Festival of Britain). It was her responsibility to direct all the great crowd scenes (250 people and she had never worked with more than about 50 at a time). She turned to Laban for help and in a later interview stated that the advice he gave was used time and time again in her own work.  He said to divide your crowd in your mind – 250 is nothing, it is just two lots of 100 and one 50.  Or 100 can be divided into 3 lots of 30 and you can have a 10, or 100 can be divided into four lots of 25 and put a leader in charge of each 25.  She directed movement for further Mystery Plays and also many large pageants at venues such as the Royal Albert Hall, Royal Festival Hall and Llandaff Cathedral.

In 1953, when the Art of Movement Studio moved to Addlestone, Surrey, although Geraldine was now an established performer and producer of dance/drama, she was appointed to the studio’s staff for the new academic year.  She also taught the advanced dance and the acting students on the Modern Dance Holiday Course held that summer.

Geraldine continued to perform and teach but her work in movement direction and choreography for stage developed. She worked on many productions from the 1950s to 2000s, including numerous productions for the Royal Shakespeare Theatre and a range of productions at leading UK theatres. Through her teaching approaches and use of Effort work, she helped actors who were not confident with dance and movement to move; she focused on the purpose of the movement, on people interacting in a story and how they would move. 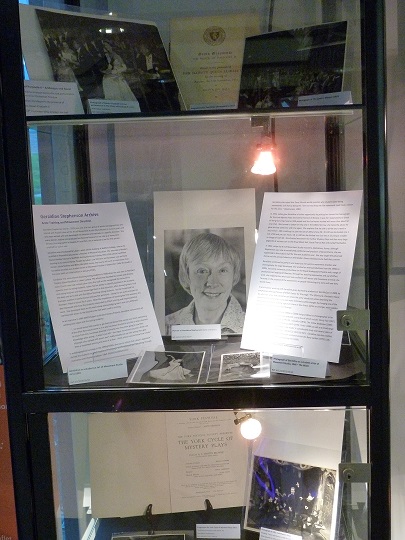 Part of a display we had recently on Geraldine and her work.

Such is her legacy and we are privileged to hold her archive here at Surrey which was received by us March, 2012. Currently this collection is uncatalogued so is not accessible to researchers.  The processing and preservation of archive collections requires significant resource, both financial and in terms of personnel, to ensure that they are appropriately managed, catalogued and cared for before making them available.  Thus, we often have to make funding applications or hope for kind donations to achieve this work. However, once completed, this collection will provide an incredibly rich resource which will allow others to delve into and learn more about this extraordinarily talented choreographer and movement artist.

Journeys to the centre of the Archives …