I drove one thousand forty-three miles in a car from the University of Central Florida to my house in Cortland, Ohio, hopped on one quick flight to New York, took countless exchanges on the NYC subway system, grabbed one not-so-quick flight from JFK to LGW (that’s London Gatwick airport for those who don’t know), caught one last train ride to Guildford Station, and walked just another mile and a half through campus up to Manor Park. That’s officially how I got here. As someone who’s never been outside of my home country, I never really knew if I would ever be an entire ocean away in Europe, let alone planning to be here for an entire semester. That is, not until the people I was closest to back home told me it would be the best thing I could do for myself as a college student. After endless nagging and a lot of… encouragement I thought to myself, “well, they haven’t led me wrong yet.”

Alright so maybe I’m being a little excessive… nagging probably isn’t the best word. While it’s definitely true that most of my friends and many people I looked up to at my university back home enjoyed their experiences studied abroad, this made me curious to ask them if it was something I should look into. If you know anyone who’s studied abroad in your life, chances are you’ll hear the same thing I did if you ask them about their experience: “Yes you should definitely do it! It was literally the best time of my life!” I was a little hesitant to trust their hyperbole at first. “Is it really for me?” I would ask myself. Then I would ask another friend, then another friend, then a cousin who studied abroad, then another friend, and they all responded the same way (see enthusiastic answer from above).

After about my first year of being in college, I decided to really look into a semester abroad. The part of my freshman year at school that I liked most was that I had met so many new people in such a short amount of time. I lived with 50+ other out of state students my first year, and we all became friends immediately in one way or another. Not that I loved all fifty of them, but something about being with so many other people who are on their own, searching for a friend, brings the lot of you rather close to each other fairly quickly. In addition to that, I wanted to really learn about other cultures in the world… not just by sitting in a lecture but by actually being there, living everyday with people who weren’t very much like me. More and more, time abroad sounded like something I would really enjoy. I wanted to find out what was possible for me. Sure maybe this was something that sounded fun, but could I even do this?

UCF (thankfully) has a wonderful department full of people willing and eager to help students find opportunities at universities in different countries across the globe—a Study Abroad Department. (I bet your university has one too!) I sent a few emails to a coordinator in the department and started browsing the office’s website to just get a general sense of the kinds of programs that were offered at my school. After just a few minutes of digging, I couldn’t believe how many different abroad options I had. There were programs ranging from just a few weeks overseas to entire semesters, for nearly every course of study at my school in over a hundred different countries all over the world. I decided that if I was going to go abroad, I wanted to get a full experience by spending a whole semester on exchange. Luckily for me, there were three exchange programs offered through the mathematics department (my course of study) at UCF: Melbourne, Australia; Cantabria, Spain; and Surrey, England.

As I thought about the three options, two questions remain in the forefront of my mind: how much will things cost? and will I have to learn a new language? Since Australia was literally half a world away, it was much more expensive than my other options—so Melbourne faded quickly. Likewise, the program in Cantabria was one where I would need to be fluent in Spanish (all of my math classes would’ve been taught in Spanish) which my four years of high school Spanish classes weren’t quite enough for. So the only option left standing for me was Surrey, which was perfect! It was going to be within my budget, there would be no language barrier, the cultural adjustment was worthwhile but not overwhelming, and their exchange coordinator was extremely helpful, professional, and reassuring that this was the place for me. 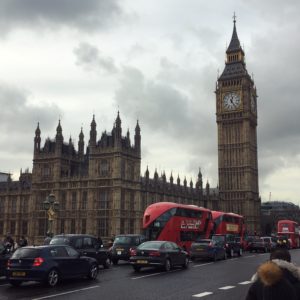 So here I am, many modes of transport and a continent away in the town of Guildford, England. After a month and a half, things here have been living up to my friends’ expectations of these few months being some of the best in my young life. I’m doing pretty well in all of my classes (or modules as they say in the UK), I’ve made a number of new friends—both here on exchange from other countries and a few locals who live here in Surrey, I’m experiencing not just one, but multiple new cultures (more on my adventures traveling to come in later posts), and learning more about myself every day. In case you’re thinking about heading off on a semester abroad yourself, let me be the first of many to tell you to go for it! I’m confident it will be one of the best times of your life.

Congratulations…. You Made it! Now What?