‘Remember, Remember, the 5th of November’

I hope that rings a bell for some people (for me, it was thanks to the lovely Natalie Portman movie: V for Vendetta that I grew up watching in school in LITERALLY every single grade.)

Guy Fawkes was a dude who was a member of the Gunpowder Plot (the assassination attempt on King James I – which failed) and he was arrested while guarding the explosives that were planted beneath the House of Lords. So, King James I survived and to celebrate this, citizens lit bonfires around the country

Whew. I JUST googled this myself so I’m glad to now know the backstory (For any V for Vendetta fans. you know that V is just a man wearing a Guy Fawkes mask and he destroys the Parliament in the end).

So Guildford has its annual Bonfire night celebration at Stoke Park (about a 20 min walk outside the Town centre) and last year I didn’t go. Mainly because it rained a lot and I didn’t really know what it was. This year, however, I was determined to join in the event so I and a few of my friends made our way to Stoke Park at 7:30 pm on the 5th of November.

We just expected fireworks, but we got so much more instead. There were rides set up, food stalls (popcorn and cotton candy!), loud music and games. Having not done my research, I had arrived with 40p in my pocket, so I couldn’t participate in any of these things. The entry to the event is free (although its nice if you can donate some change while you enter) but the costs for rides and food is separate. My friends and I are determined to carry cash next year

Anyway, the fireworks were due to start at about 8:30 and boy was it amazing. It was 15-30 minutes of bright lights in the sky and as a REAL big fan of fireworks, I was in awe.

All in all, it was a pretty cool first time experience. I’ll most definitely be going next year, probably taking some cash with me so I can whiz around in some of those rides before the fireworks start! I took a few photos of the fireworks (see below), because I realised that no one really wants to see a 200 second snapchat story about bright lights repeatedly shooting up into the sky.

I’m off to Cardiff this weekend (AW YEAH!) and I cannot possibly be more excited. Granted, I have tests on Friday AND Monday, but I’m risking it! I have saved up a lot of money to do some travelling this year and this is the first of what I hope to be a lot of trips around the UK and Europe. I hope to take a ton of photos and thats what most likely my next week’s post will be about 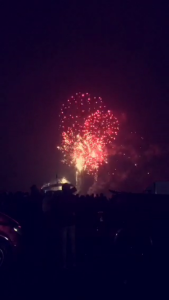 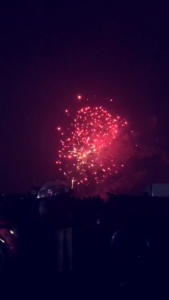 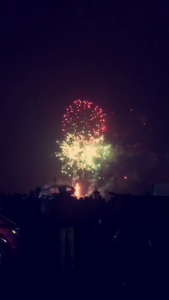 Also, in the honour of veterans and men and women lost to us during war, please take a moment out of your day today to wear a poppy, remember them and their efforts; Lest We Forget