Hello! As promised, today I wanted to discuss some of the difficulties I faced in my decision to go home for Christmas. I want to say that despite these difficulties, if I had to do it again, I would still go back home over break.

As I have described in a previous post, the semester schedules are very different here in England compared to Canada. The schedule is a lot like the ones we see in Canadian high schools in that your semester finishes before Christmas but you get a long break before your exams. My schedule worked like this:

Now at first I was very excited about this long break given that I had always felt very rushed during exams in my undergrad. However, I did find it very difficult to decompress and relax during the holidays. I had told myself that I wasn’t going to touch my books until after New Years given that I normally only need a week in advance to get myself ready. After a while I was able to suppress some of the guilt I was feeling from not studying and simply enjoy my time home. When it came time to get back into it in order to write my coursework, it wasn’t as pleasant. I felt like I had underestimated the amount of time it would take me to get back into the flow of my studies given that I had spent almost a month away from my books. Now I still managed to write the two essays – it was just quite a stressful period of time. This was mostly because I had forgotten where to find the information I had originally planned to include in my work. My advice to myself for next year is to periodically go through my notes during the break (as hard as it is to muster up the motivation sometimes) in order for the material to remain familiar.

As I’ve said going home was amazing, and I would do it again. However, I found coming back to Guildford was quite difficult. The first time around I was so pumped with adrenaline and the routine of school began so early that I was able to manage my home sickness quite well. This time around you come back to the stress of the exams and there is no routine to keep you busy except the one you create for yourself. This is key. The morning I landed I was lucky enough that my prof had organized a review session. This got me out of my room and socializing right away which really helped. The next few days I tried to get out of my room at least once a day, either for a walk or a coffee with friends. I tried to keep a strict schedule for meals and showers. This might sound a bit strange but routine really did help me and might help you as well. I gave myself goals for my studies each day in order to pace myself to the finish line.

Something that I didn’t think would have bothered me as much was the fact that in this Law program, our final exams and coursework are worth 100% of our mark. What I tried to do was remind myself that I put the same amount of effort in all the work I do despite the weight and to do my best as this is all I can do. It’s hard to convince oneself sometimes but you really just have to take things one step at a time, even if that step is one hour at a time. It is so important to be reminded to step away from the books once in a while and have human contact or fresh air to change one’s set of mind.

Another thing to take into account is the time change. I really does take a few days to get readjusted so leaving a few days between leaving home and your exams is probably a good idea. You could also decide to come back to write your coursework here in Guildford rather than back home if your program is set up as mine was. I decided that I’d rather extend my stay at home rather than head back earlier.

My final tip for surviving final exam period is to find something to get excited about post exams. We do get an extra week of break after exams, and depending on your exam schedule you could end up with even more time. My cousin Victoria and I decided to plan a trip to Paris. This allowed us to take a break from studying once in a while to book the trip and plan some activities and it also simply got us excited. You could also just plan to see a play, or a smaller day trip to London, or an activity with friends. It was just an extra touch to get myself back on my feet at University.

I thought it was important that I share this experience with you as I wasn’t really expecting to feel this way. Especially given that I have previous academic experience. But then again, I had never studied away from home so this was a first. Hopefully this account of my experience might be helpful for some. 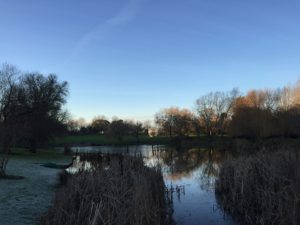