Cynicism comes easily: to watch the events of this week unroll has been to see every cliche of European integration at play. Backroom deals, grandstanding eurosceptics, scapegoating and general ignorance – sadly, an all too common sight in and around the EU. 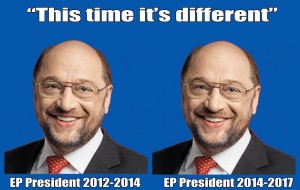 Rather than wallow in this, I would rather try to step back and consider some of the more structural questions.

The first one that occurs is the undercurrent of debate about a German exertion of power (this is typical). Undoubtedly, Juncker’s nomination to Commission president owed much to Angela Merkel’s support, even if that had been given under some domestic duress. Merkel’s position effectively underpinned the European Council’s to follow through on the path on which the Parliament had set it. The pay-off of Schulz returning as Parliament president says more about Schulz’s ambition and unhappiness at missing out on the Commission as anything else, but it also reflects a overcoming of previous unwillingness to have too-similar figures in top posts.

However, this is to miss the broader logic at work.

The entire Spitzenkandidat process is majoritarian in effect: using Parliament elections to select an individual to lead the Commission, thus politicising the latter, even as it ‘democraticises’ it. I’ll leave it to the others to justify the last element, suffice to say that democraticisation needs popular engagement to fully underpin it, and even with the debate of the past few weeks, that remains very weak.

This shift to majoritarian politics matters, because it rather goes against the grain of the EU system. This latter is a consensus-building machine, off-setting local costs with global gains and package deals at every turn. This is not to decry the EU, for it is a process that has worked remarkably well since its formation in the 1950s, producing a system of unrivalled depth and complexity.

One of the side-effects of this consensual approach was that German power was contained in a wider environment, whereby it could achieve its broad objectives without explicit leadership or capture of institutions: this is the ‘milieu goal’ view of Bulmer et al. This fitted in well with (West) Germany’s position in the post-WWII, Cold War period, where anxiety about a German Europe was both understandable and unacceptable.

With the emergence of a new German polity after 1989, the country has slowly become more comfortable in expressing its views, be that on the budget, foreign policy or institutional design. The Eurozone has merely reinforced that by its exposure of German monetary policy (and stability) to its partners.

But the Spitzenkandidat model marks a new trend, whereby the pressure towards a majoritarian outcome makes it more likely than German individuals are pushed to the fore.

Consider how EP groups selected their candidates – the largest national delegations had the most influence. The stability and size of the CDU/CSU and SPD factions in the EPP and S&D respectively contrasts with the fluidity (or absence) of their French, British, Italian and Spanish counterparts. The result? Those candidates with any realistic chance (Juncker, Schulz and Verhofstadt) all looking close to German positions.

Again, this isn’t necessarily a problem, but simply a reflection of the different sizes of member states: Germany is the largest member state, so should we be surprised that those it supports have a good chance of success? Not really.

Where it does become a problem is when the majoritarian model continues to expand and rebalance the existing system.

Let’s think about the 2019 elections: now that the Spitzenkandidaten look set to become the new norm (pace the European Council conclusions about reviewing the process). European parties will inevitably put much more effort into their efforts to secure their candidate’s success, and the resultant increase in profile might then lead the new Commission president to be more forceful in their choice of fellow Commissioners, further politicising that institution. That in turn potentially affects its ability to represent a ‘European’ interest, or at least to be an honest broker between different actors.

This might all be over-statement, but the concern is that it’s not a debate that has really been had at all: the British blow-up over Juncker qua Juncker has distracted everyone’s attention from the longer-run effects. Without that debate, the EU risks making another rod for its own back.

The momentum issue in euroscepticism

Debating the EU: How can we do it?