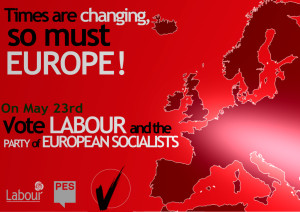 It’s not been often that I’ve had cause to write about Labour and the EU in the past four or five years: apart from Ed Miliband’s semi-drift into referendum commitments last year, there hasn’t really been much of a policy. A general sense that it’s A Good Thing, but largely a continuation of the positional policy-making that has characterised British EU policy more generally – we like it because the other lot don’t.

However, Labout has always had a more complicated relationship with European integration than the popular memory often admits. Recall that until the 1980s, it was Labour that was more instinctively anti-membership of the EEC/EC, with the Tories pushing forward because of the trading opportunities it offered, while Labour worried about workers’ rights. Labour triggered the 1975 referendum, with Wilson only side-stepping internal opposition to his renegotiation by offering a free vote. With the possible exception of Tony Blair, there has been a certain sense that Labour leaders have always found the EU more useful as a stick to beat the Tories over the head with (more accurately, to let the Tories beat themselves with the stick) than as a central or fundamental plank of their programme.

And so we end up with Jeremy Corbyn, the great white hope of the Left.

Corbyn represents that long-standing part of the party that never really found an accommodation with European integration. While the leadership and most members turned in the 1980s under Kinnock and Smith, as workers’ rights came to the fore, the old Left (including many parts of the Trade Unions) merely skulked in the corner, biting lips, rather than expressing any enthusiasm. From the 1990s onwards, there were repeated formations of campaigning groups from this constituency, against the Euro, against the Constitutional Treaty, and now against membership.

That Corbyn secured as large a majority as he did last week points both to the relative lack of importance that the party attaches to European matters and to the latent constituency of sceptics that he has been able to mobilise: witness the TUC setting out their stall this week.

Corbyn himself has been very ambivalent about his position. From an initial refusal to give unconditional support to membership – which cost him some potential members of his shadow cabinet – we now have a statement that he couldn’t see himself campaigning to leave.

At one level, this is all just very Corbyn-esque: unspun, truthful and, in its way, reasonable. One would struggle to find anyone who would say that whatever it did they would support the EU (or anything else, for that matter). It’s bad politics and a bad way to live your live saying that your mind is made up and will never be changed, even if that’s often how things go. Of course, the EU is somewhat particular in that it’s a highly bargained system, with checks, balances and internal inconsistencies: from Corbyn’s perspective, Cameron doesn’t look like a man to be renegotiating more social or environmental protection, or to be stepping back from trade liberalisation, internally or externally.

But this reasonable position has its limits: as I’ve noted elsewhere, if Corbyn chooses not to be part of the ‘Remain’ campaign, then it becomes much harder to create the impression of a broad church of support. Certainly, his actions of the past weeks have already made it harder to take the whole Labour movement with him on this: it’s difficult to see him going down the road of a Damascene conversion in six month’s time. He’s Jeremy Corbyn, not Tony Blair.

The basic dilemma here is that the political life of the country is more than just EU membership, and Corbyn is entirely right to look at the big picture – a man who crowd-sources his interventions for PMQs is a man who wants to represent the people and their concerns. However, most people – including most politicians – don’t appreciate the extent to which the EU shapes, supports and constrains other areas. While the costs to the Left seem apparent – TTIP, austerity and the rest – the benefits are less clear, even more so the costs of non-membership.

The historic split of the Left came between those who decided to break the system and those who decided to shape it. The latter group, the socialists, might usefully recall that moment when they look at the EU: it is neither intrinsically good or bad, but rather a mechanism to be operated. The best way to get the EU they want, is to get stuck in, not to turn their back.

A (bad) path from the referendum?

Intensity and direction tensions in the EU referendum campaigns