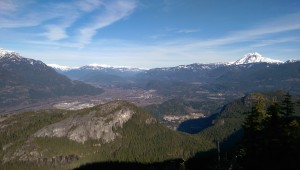 The view from above

Thanks to the foresight that all academics are blessed with, I find myself almost half the world away from the UK this week, just as everyone seems to be having a brief pause before next week’s European Council. I might pretend that my Canadian and American colleagues here on the West Coast are pestering me to know more of the detail of the debate, but they seem to be chronically indifferent. What Boris Johnson’s wife thinks about the EU turns out to be not that interesting or important to them.

Personally, I always like these opportunities to step outside of a bubble and look back in, precisely because it reminds me that it is a bubble and not nearly all of everything that there is. It’s also a useful corrective to the persistent thread of debate about the catastrophes that await us if we foolishly follow the advice of the other side: slaves to a superstate, impoverished irrelevances. I know it’s for effect, but that effect still has an effect.

Seen from afar then, matters look like this. Cameron looks to be in a reasonably strong position for now. The lack of major opposition to Tusk’s package last week – the wobbles from Warsaw notwithstanding – suggests that the European Council will be able to find consensus around that text, or something very close to it. Tusk’s masterstroke was to make this a very public phase, publishing the text, so that everyone became much more locked into it. That might limit Cameron’s scope to get more, but it has also seemingly put a floor underneath it too, by reminding everyone that the flexibility on offer is essentially compatible with the treaties and on offer to any member state that asks for it.

Couple that to the sense that this just needs to be put to bed, so the Union can get on with more consequential and pressing matters, and it looks like a shoe-in for a June vote.

How that vote will go is harder to call. From the outside, the working assumption is that the status quo will prevail, both because the uncertainty of non-membership is too high and because it’s felt that most voters don’t actually hold very strong views on the matter, and so will follow elite cues. You can see the logic, but given the pitiful history of EU-related referendums over the decades and you’d be hesitating before placing any bets on that basis.

What is certain is that we still await the hot phase of the campaign. Neither side has unleased its full forces and the impression is mainly one of trying out lines, putting the pieces in place. That one of the main areas of debate is the personality clashes within the Leave camp suggests that ‘the issues’ are not really the priority.

And this is the final observation. I’ve yet to meet anyone who thinks that this referendum will change much. A vote to Remain will simply continue the awkward relationship between the UK and EU, while Leaving will open up a new range of negotiation, in which a new awkward relationship will be forged.

The concern here has to be that both sides have bought their own messaging: things are either brilliant or terrible. The unwillingness of either side to concede that things are complicated, sometimes good, sometimes bad, and need constant attention, is likely to be ultimate missing opportunity in all of this. Whatever the UK’s legal status vis-a-vis the EU, there has to be some kind of relationship, and that will need work, just as it always has.

And you don’t need to