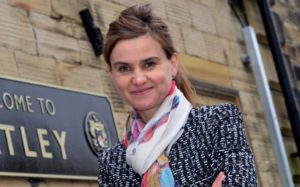 One of the greatest inventions of human civilisation is democracy. A system of managing our common affairs through debate, compromise and consensus, the willingness to pursue a peaceful way to settling our differences is surely something that we should applaud.

It is also something we should fight for.

The murder of Jo Cox yesterday was a terrible act, not just for its manner, but for who she was. Jo was a politician, but she was also a person, like us.

These days we are all quick to talk down politicians, to say that they don’t represent us but only themselves or special interests. That the system doesn’t work.

This doesn’t fit with my experience.

Not least in the past few months, I’ve spent time with those politicians and without exception, they have been sincere, hard-working, committed individuals. If they are driven by anything, then it has been a desire to make their community, their world, a bit better. I might have disagreed with them on how they wanted to do that, but I have never doubted that they have been doing it for anything other than the best of intentions.

The price of that commitment is a role that can endlessly expand, take you away from those who are special to you, make you take difficult decisions, and – as we saw yesterday – put you in harm’s way.

We lionise those who fight for our country, whose job it is to risk life and limb for our security, and that is right. But we should also remember that there are others out there, who put themselves forward to make the choices that most of us recoil from, choices that affect millions. And like on armed forces, they do this through choice, through their sense of duty.

Doubtless, somebody somewhere is drawing some conclusion from Jo Cox’s murder on some point of policy or other. I won’t do that, because I simply mourn the passing of someone who has paid with her life. That she is an MP makes that no worse, precisely because she was still a person, like us, torn from her family, from her friends and colleagues. A woman with hopes and ambitions, plans and intentions.

Her death reminds us that politicians are like us and we are like them: that is the fundament of democracy.