A version of this post was presented to the Conway Hall Ethic Society on 24 July 2016. 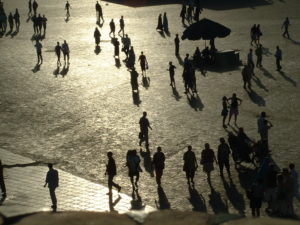 The history of UK-European relations has been one of muddling through. At no point in the past 70 years has there been a plan or a strategy: that’s as true today as it was in the 1950s. And the UK will suffer for it.

This might sound strange, coming hot on the heels of the decision to leave the European Union (EU) in the June referendum. Wasn’t that an example of the country making a decision, setting a course? Most emphatically, no, it wasn’t.

The analogy I would offer here is that of getting dressed in the morning. I imagine that when you do this, you think about what you will be doing, who you might be meeting, what the weather’s like. You probably don’t work on the basis solely of picking something to wear because it matches your eye colour: that might be part of your decision, but it’s by no means the only part of it.

What happened in the referendum was something like that. Yes, the British people made a decision, but they didn’t really talk about why they’d made that decision or what should come out of it. Even a cursory glance around the country in these weeks after the result will show that there is no still agreement about what the decision ‘means’ or even about how it should be pursued.

In truth, all of these things are true and all are false, for the simple reason that in a democracy we don’t ask that everyone agree, only that they have opinions, can voice them and then come to a decision through some agreed mechanism.

The problem has been that while opinions have been voiced, they haven’t come together to produce a conversation. You thought this, I thought that, we both voted and here we are.

Referendums are, in this respect, highly problematic. If you can have the debate – as happened in Scotland – then you can get closer to some kind of consensus view, but even then the meaning of each option is wide open. Indeed, as Scotland showed, even when people didn’t feel quite confident about what was what, the aftermath completely confounded that, with David Cameron’s decision to turn it into a debate about England’s part in the Union.

And the EU referendum was not Scotland. There was nothing like the depth or breadth of debate and discussion about why we might vote one way or another. The simple fact that the Remain campaign was unable to articulate any coherent and positive vision of why being a member of the EU was good for the UK highlights how profound this problem has been. Easier to brush matters European to one side, for being too complicated or problematic to discuss, than to go out and make the case.

To be clear, this is not to say that the referendum was illegitimate or wrong.

For many on the Remain side, the constitutional niceties of parliamentary sovereignty or the large majority of MPs that support membership look like ways out of the situation, opportunities to overturn the referendum. But that would be even more of a travesty of the democratic process than the referendum itself.

Remember that the referendum was called by the government, underpinned by an Act of Parliament, run under the rules and organisation of an Electoral Commission set up for just such a job, and won by a majority of voters on a higher turnout than most recent general elections. It brought many people who have otherwise disconnected themselves from the political system back to the polling station.

If, despite all of that, we were to turn around and say that “actually, your voice and vote counts for nothing”, then we risk deepening the very real sense of disillusionment and disaffection felt in many parts of the polity and we vindicate the sense that ‘they’ decide whatever ‘they’ like and the rest of ‘us’ have to suffer it. Whatever one feels about a majoritarian system, that is the one that we have and the one we have to abide by.

However, that does not mean we cannot continue to debate and continue to try to secure our objectives, whatever they might be.

Consider the situation of Eurosceptics. For a good quarter century they have found themselves on the wrong side of almost every decision made within the body politic: as European integration moved on, they were unable to stop or deflect much of that process. But they persisted and kept trying their best to find a way forward. Eventually they found a powerful tool in the form of ‘giving the people a voice’, which they were ultimately able to bring to effect this summer. Whatever one feels about that, or about them, you have to acknowledge that change is possible within the system.

So if there is anything to be gained from this referendum then it is that we have to go out there and work to get what we want.

Firstly, it matters that we do this now because we are still in the situation of not knowing what we want our relationship with the EU to look like. With a set of negotiations that won’t start until 2017 and will stretch out towards the end of this Parliament, now is the time for everyone to lay out more clearly what they want to see happen. Are we open or closed to the EU? Are we trying to stay close or to move far away? If we’re trying to keep the ‘good bits’ of our relationship, then what are they and can they persist without the rest?

Secondly, it matters because the life-blood of any democratic system is participation. If we don’t speak then we are not heard. If we don’t try to shape decisions about our future, then other people will shape them for us. Our political system has many faults, but it is still better than any of the non-democratic alternatives. We might argue about how best to proceed, but at least we are able to argue and try to find solutions.

Thirdly, it matters because we cannot live our lives in the past. To quote the apocryphal Irishman giving directions, you might well not start from here, but this is where we are. The only reason to rake over the ashes of what has happening is to find useful ideas to help us move on, to find the better place that we want to build, to live in. If the fallout from the referendum has taught us anything, then it is that there is a lot more choice available to us than we might normally realise: choices about what society we want to live in, what kind of country we want to be. We cannot change the past and the decisions that have been made, but we can certainly do our best to shape our future.

If Music Be The Food Of Love

Dissipation, redirection and staying true: What future for Euroscepticism in the UK?