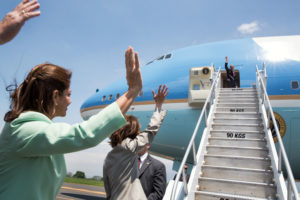 I’ll take it as a mark of how 2016’s played out more generally that Donald Trump’s victory in the US presidential election today comes less as shock than a disappointment.

To be clear, it’s not a disappointment as a function of my politics, but of my concern for the state of democracy these days. Following the old journalistic trope that two things happening is a trend, it’s tempting to pin together Trump and Brexit in a bigger narrative. Obviously, with any hot take, it’s probably wrong, but I’d be happy to be disproved on this occasion.

Hirschman’s Exit/Voice model is one that feels like the most useful at this juncture, because it looks like its previous formulation is now under challenge. Hirschman argued that in any organisation, individuals have a choice to make: either they accept what happens to them and stay loyal, or they seek a voice to shape what’s happening, or they try to exit the organisation.

Applied to the political arena, especially in the post-Cold War period, it is this last option that has seemed to be most important. People have felt a disconnection from their politicians, who have hunkered down on a broad consensus of liberal, free-market economics (a la Fukuyama) and who appear to offer managerialism rather than leadership. Turnout has declined, alongside wider ‘old’ political participation, with activity shifting into the more atomised and individualistic realm of cyber-activism.

However, at the same time, that rise of neoliberalism has come with a side-effect, namely the commodification of society. We can no get what we want, how we want it, when we want it. Right now, I’m trying to write this in an airport lounge and I’m bothered by the intermittent nature of the free wifi, without even thinking about why I should be given such a thing: it should work, because I want it to.

What we see then is a transfer of this back into the political realm: public understandings of the fundamental role of debate, compromise and consensus in democratic polities seems to be low, especially as new political actors emerge to offer us the proverbial ‘one simple thing’ that will made we can have it all. Just vote to leave, build a wall, or blow them up and all your problems will be gone.

This then feeds back into the secular trend of declining trust in politics and politicians. People increasingly see the latter as either ineffectual or actively damaging to their (peoples’) interests. The system doesn’t look like it works, for more and more people.

All of this them comes together in a reversal of the Exit scenario. People now come to vote because they are told that their voice counts in a way that it hasn’t before; that with one push they can enter a new era of politics that works differently. The EU referendum demonstrated that people can become engaged enough to turn out and vote, while in the US it was the holding-up of the Republican vote that helped Trump over the line, even as the Democrats lost that motivational edge they held with Obama.

And so we find ourselves with victories that were unexpected by the commentators and politicians, victories that seem inexplicable too. Obviously, they argue, these plans and ideas cannot work, but people still vote for them. In part that’s because people don’t necessarily expect them to work: they want to try something different, because what they have now doesn’t seem to work either, so where’s the risk? Moreover, there’s a sense of pleasure in making “the politicians” squirm, untrusted and unliked as they are: as we suffer your failings, so too will you suffer them.

The tragedy is this is clear.

The likely failure these radical departures to achieve anything like their stated objectives (as the voters imagine them) means that a new wave of disillusionment risks setting in. “You promised me things would change and they haven’t: you’re no better than them” will be the slogan. That’s bad for voters and it’s worse for politicians, because they will find it ever harder to gain and build public trust. Ultimately, we come back to Exit as a solution, a hollowing-out of the democratic system where ‘real’ political activity happens elsewhere, away from scrutiny and accountability.

So what to do?

The answer has to involve determination to keep trying, to not walk away from the problem. It needs politicians and public commentators to try and encourage the maintenance of political debate that is inclusive and grounded in respect. And there’s no guarantee of success, because complicated solutions don’t have simple answers [sic]

What the High Court ruling does (and doesn’t) mean

How to win at Brexit