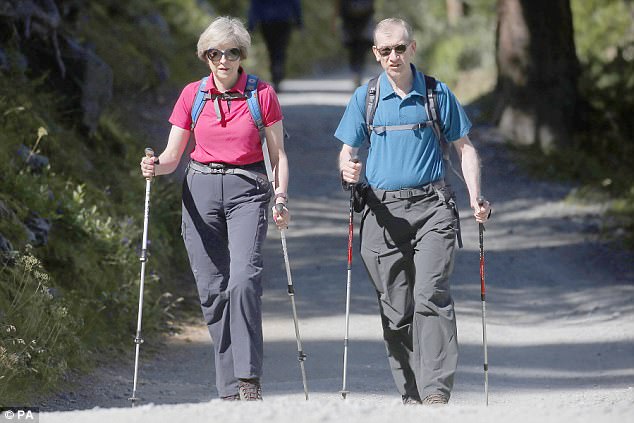 I’ll just had a great idea…

The lovely thing about long walks is that they give you time to think, to join your physical movement with metaphysical wanderings through the things that occupy your life. It’s often a time when you have a bright idea, that makes sense as the sunlight filters through the leaves and warm air of spring fills your lungs.

And this general election has very much the feeling of an idea that Theresa May has had on her walking break in North Wales. It’s easy to imagine her chatting with Philip about the pros and cons of calling a vote, exploring the highways and by-ways of it all as the vistas unfurl before them, and the security detail think back fondly to those barbeques in Witney.

It’s not that the election is a bad idea, but there is no immediately obvious, compelling reason to hold it: all of the basic parameters have been in place as long as May has occupied Number 10.

This leads to the most obvious conclusion about this decision, namely that it is driven by domestic political calculation rather than anything to do with Brexit. This is important to keep in mind both because it echoes the long-term pattern of British European policy, but also because it reminds us that May continues to entertain the idea that her premiership will not just be shaped by the departure from the EU.

This said, it is useful to consider the relationship between general election and Brexit, because the two will have to bump alongside each other and there will be effects by each on the other, especially given the rather specious reasoning given by May for calling the election, namely the division in Westminster.

In procedural terms, the election will not result in any major delay in Article 50 negotiations. Recall that at present everyone is awaiting the 29 April summit of the EU27 to confirm the negotiating brief and the basic schedule for talks. Then there will be another week until the second round of the French presidential elections and some weeks after that when Commission’s mandate will be finalised, which puts us within spitting distance of 8 June. At the same time, it does mean another month lost for substantive negotiations, which will prove problematic when it comes to working through the extended agenda that May has in mind.

Once again, the key point to keep in mind here is that Article 50 is driven by the EU, not the UK, so in this initial phase, the focus will be on what the other member states can agree to offer to the UK, rather than what the UK might ask for. Incidentally, this also highlights the vapidity of the Tory position that an enlarged majority for May will somehow strengthen her hand:  every country has voters and it will be their own domestic pressures that change their positions more than how many MPs the British government can count on.

If there is a procedural bonus, then it is that the resetting of the electoral clock means that by the time the next general election has to be called, in June 2022, not only will the Article 50 negotiations be well past, but so too will much of the mooted 2-3 year transition period, which makes it even harder for any new government to overturn the process: Brexit will indeed mean Brexit.

Much of the procedural questions at this stage will be largely technical – schedules of meetings and the like – and can continue unabated during the campaign but the general election will raise an interesting personnel issue.

General elections are often opportunities for Prime Ministers to reshuffle portfolios, especially if there is the prospect of an influx of new faces. However, May will be a bit of bind over whether to do this. On the one hand, some of her front bench have been less than impressive, either politically or managerially, so this is a chance to have a second bite of the cherry.

However, on the other hand, the current Cabinet have been in place for a relatively short period of time and there was a clear presentation of the choices made as a conscious strategy: put Leavers in key roles to own the subject.

To replace any of the three main Brexit ministers – Davis, Fox or Johnson – now might lead to improved performance, but at a price of calling into question May’s judgement in appointing them in the first place (and recall that all three came with big question marks over their heads). As was clear at the time, while it’s useful to have a front row to soak up the problems, it is ultimately on May’s shoulders that they succeed.

The final potential impact of the election will be on substantive policy goals in Article 50.

Here we have to be careful to unpick the dynamic that has already emerged of a softening of May’s stance in and around notification. Gone are the more improbable goals on CJEU jurisdiction and no transitions, in reflection of the growing awareness of the intricacies involve in unpicking the UK from the EU. None of that happening in anticipation of this election, but potentially the election will give more cover to May.

Consider the most likely outcome on 8 June: an increased majority for May. Let’s also assume that Central Office is able to have a relatively big say in candidate selection over local associations, given the time constraints. This suggests that the specific weight of any sub-grouping within the new parliamentary party will be reduced and that the group as a whole will be more beholden to May’s leadership.

Put differently, neither the pro-EU rump nor the hard Brexiteers will be as able as now to hold the Parliamentary majority to hostage, so May will be in a stronger position to pursue her own agenda in negotiations and then to get the results approved at the end of Article 50.

This underlines one of the more unmentioned truths of the Brexit process, namely that Theresa May does not obviously know her own mind on what the post-membership relationship should look like. The studied ambiguity of her public pronouncements will continue throughout the campaign, as she seeks to find a solution that looks viable, rather than one that follows any detailed ideological positioning.

Seen in this light, the general election is set to offer little new light on how Brexit will unfold and will do little to shape what happens. Unless, of course, there is some major upset on 8 June: and if recent history has taught us anything, then it is that we should always keep the unexpected in mind.