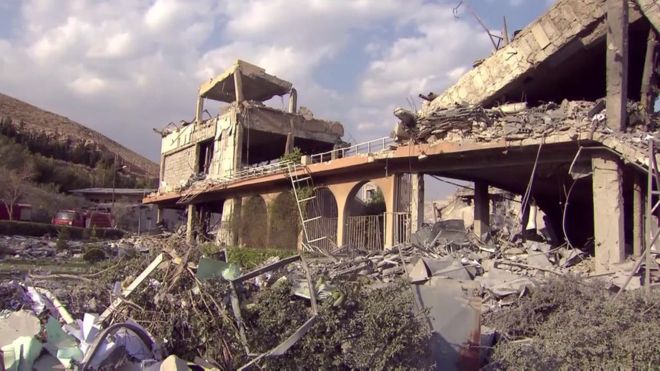 The Syrian air strikes show that legality is only one consideration for states contemplating the use of force, but that it nevertheless remains important.[1]

It is unsurprising, in the wake of the air strikes carried out by the US, UK, and France on 14 April 2018 against the Syrian Government’s chemical weapons facilities, that questions are being asked about the legality of the intervention. This is not a new debate; ever since the UN Charter was adopted in 1945 – and in particular since the end of the Cold War – western democracies have wrestled with the dilemma of how to respond forcefully to prevent or to halt atrocity crimes in third countries while respecting international law. The use of force is permitted under the Charter only in self-defence (Article 51) or when the UN Security Council (UNSC) judges that there is a threat to international peace and security (Article 42). This means that there is no obvious legal justification for strikes such as those in Syria.

However there has also been a consensus that the outside world cannot ‘stand idly by’ when atrocity crimes are being or are about to be committed. This led the UN General Assembly at its ‘World Summit’ in 2005 to endorse the concept of ‘The Responsibility to Protect’ (R2P), which included the notion that where a state was ‘unable or unwilling’ to protect its citizens the international community, acting collectively, could intervene on the latter’s behalf. Although it could be argued that since 2005 R2P has been honoured more in the breach than in the observance it nevertheless remains a powerful normative principle. However intervention under R2P does require UNSC approval; so where the latter is deadlocked, as in the case of Syria, its utility in practical terms is null.

For some time the UK Government has defended the separate but related concept of ‘humanitarian intervention’. This is a much older idea, which in its wider application has had a chequered history – mainly because it has been used to justify interventions whose primary purpose was barely ‘humanitarian’ and which have proved divisive within the wider international community. In the wake of the Syria strikes, the Government has published what it presents as its ‘legal position’ on the concept of ‘humanitarian intervention’ in such situations. (A similar statement was published after the chemical weapons attack in Eastern Damascus in August 2013, when the UK Government under David Cameron famously failed to secure parliamentary approval for military action against the Syrian regime.) This is a very simple position, which claims that:

“The UK is permitted under international law, on an exceptional basis, to take measures in order to alleviate overwhelming humanitarian suffering. The legal basis for the use of force is humanitarian intervention, which requires three conditions to be met:
(i) there is convincing evidence, generally accepted by the international community as a whole, of extreme humanitarian distress on a large scale, requiring immediate and urgent relief;
(ii) it must be objectively clear that there is no practicable alternative to the use of force if lives are to be saved; and
(iii) the proposed use of force must be necessary and proportionate to the aim of relief of humanitarian suffering and must be strictly limited in time and in scope to this aim (i.e. the minimum necessary to achieve that end and for no other purpose).”

Those familiar with Just War Theory (JWT) will spot the similarities, but also the differences. The most striking omission is the lack of reference to ‘right authority’, which is one of JWT’s core principles. (The nearest the UK position gets is the requirement for there to be ‘evidence, generally accepted by the international community as a whole, of extreme humanitarian distress’ – but that is not quite the same thing.) This is hardly surprising, given that this is an attempt to provide a justification for the unilateral, as opposed to the multilateral, use of force. It caters for a situation, such as the present one, where the ‘right authority’, i.e. the UNSC, is – you might say – ‘unable or unwilling’ to authorise the use of force, and in effect argues that in such circumstances states can take the law into their own hands. So instead of collective action mandated by the ‘right authority’ we have a reversion to the pre-UN world where states could undertake a ‘humanitarian intervention’ claiming a right under customary international law.

Needless to say, this position is not universally accepted. Certainly it is opposed by Russia and China, the other two permanent members of the UNSC. It is not even clear that the US and France hold quite the same position as the UK. And within the world of international legal scholarship there have always been and continue to be opposing views. If you want to get a flavour of this you could start with this contemporary blog piece by Kevin Jon Heller, who rejects the lawfulness of the US/UK/French strikes on Syria; the post also contains a link to an article from 2013 by Harold Hongju Koh, who takes exactly the opposite position and supports the principle of ‘humanitarian intervention’ in limited circumstances.

So it is clear that ‘humanitarian intervention’ as a legal (as opposed to a moral) concept is at best a contested one. But even if we reject it as providing a legal justification for the Syria strikes, does that mean that it was wrong of the UK Government to have carried them out? Here it is helpful to introduce a different concept in international relations, that of legitimacy. Following Ian Clark[2] this can be thought of as having three components: moral, legal, and constitutional, the latter defined as “the mutual political expectations on which international society is from time to time founded, and which are not fixed in legal rules” (Clark, p209). In other words, although the law is an important component of legitimacy, it is not the only one. The law may be out-of-date – this is precisely the argument of many of the advocates of R2P and ‘humanitarian intervention’, so where there is a moral but not a legal case for action, what are states supposed to do? It may be that the ‘constitutional’ factors are the most important ones; compare for example NATO’s intervention in Kosovo in 1999 (often described as ‘illegal, but legitimate’) with the US Coalition’s invasion of Iraq in 2003 (rarely described as anything other than both illegal and illegitimate).

Interestingly, one of the reasons why the Kosovo intervention is generally considered to have been legitimate even if not legal is that when Russia tried to halt the NATO military action by calling for a vote in the UNSC it lost by 12 votes to 3. Similarly, the vote called by Russia in the UNSC on 14 April seeking to condemn the Syria strikes as an act of aggression only secured 3 votes (although this time there were 4 abstentions). This may suggest that in time the Syria strikes will come to pass the test of legitimacy, whether or not the claims for their legality will be accepted.

What this illustrates is that the law is only one factor that states take into account in deciding whether or not to intervene using force. Nevertheless legality remains important, if only because if one wants others to abide by the law one had better obey it oneself. Given that arguably the greatest threat to international peace and security at the present time comes from a growing disdain for a rules-based international order anything that weakens respect for international law is to be regretted. The stakes are high.

A final comment relates to another core principle of JWT: ‘reasonable prospect of success’. History shows that those interventions that achieve their objectives are judged more kindly in terms of their legality and legitimacy than those that fail to do so (compare again Kosovo in 1999 with Iraq in 2003 – or even Libya in 2011). Ultimately, the US/UK/French air strikes in Syria will be judged by whether they prevent any further illegal and immoral use of chemical weapons against the civilian population. That is surely a goal worth pursuing.

[This post was updated on 17 April 2018 to include a link to the August 2013 position statement by the UK Government on ‘humanitarian intervention’.]

[1] Disclaimer. I am not a lawyer. This piece makes no claims to expertise in international law, but is written with two aims in mind: first to try to cast some light on a current issue that should be of great concern to students of politics and international relations, and secondly to encourage students to follow up the references and to come to their own conclusions as to the legality and legitimacy of ‘humanitarian intervention’.

Control in theory and practice