An interesting debate has emerged on the political twitter-verse in the last 24 hours, out of the much discussed White House Correspondents dinner and the customary ‘roast’ provided this year by Michelle Wolf. Wolf has experienced significant backlash from both the conservative political establishment, as well as from senior Washington political correspondents for a speech that was deemed crass or even ‘a disgrace.’* But what started as a discussion about the appropriateness of Wolf’s roast, has quickly morphed into a discussion about the subservience of the press to Trump’s media tactics, and the normalisation of many of his worst behaviours through a facilitation of his agenda setting power. As Wolf ‘caustically’ noted in addressing the gathering of the Washington press corps:

“You guys are obsessed with Trump. Did you use to date him? Because you pretend like you hate him but I think you love him. I think what no one in this room wants to admit is that Trump has helped all of you.”

This is not a new observation, but has been a critique of the major news networks and print media reaction to Trump since the beginning of his campaign for presidency, both from within those institutions and without. Trump’s presidential campaign seemed evidence for the maxim that “there’s no such thing as bad publicity,” as the wall to wall coverage of the problematic aspects of his campaign were coverage nonetheless. At a post-election summit of campaign managers in Boston, CNN president Jeff Zucker was lambasted angrily by the campaign teams of Trump’s opponents including those of high profile Republican candidates like Ted Cruz and Marco Rubio. They shouted down Zucker for the free coverage afforded Trump by his apparent arch nemesis, who they accused of airing footage of an empty podium at Trump events, while other candidates were actually delivering campaign addresses.

Take for instance the US/UK/French bombing campaign in response to the Assad regime’s continued use of chemical weapons. Taking our lead from the Trump administration, the international community, the media and all of us with an interest in global politics, engaged in debates and soul searching over the utility and morality of a military response. Trump was plastered across the headlines of newspapers around the world, his tweets literally providing the headlines. The dangers of escalation to armed conflict with Russia and the spectre of a third world war generated anxious but excited discussion. 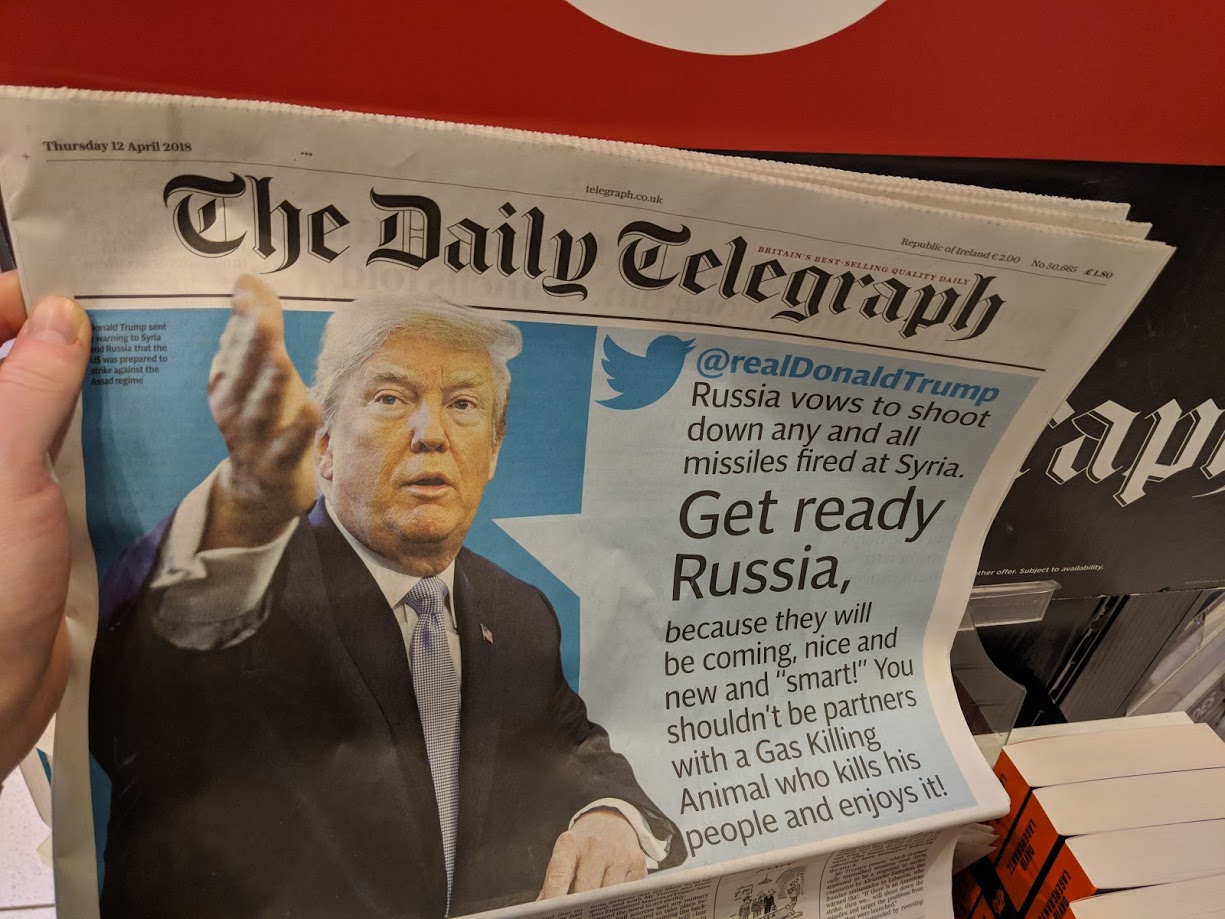 In the end the US bombed Syrian airfields that were likely empty of personnel and equipment, in a brief attack with a seriously questionable claim to legality in either domestic or international law. Trump declared ‘Mission Accomplished’ (with no discernible irony) and the circus moved on the next act.

Today missiles struck two Iranian supply depots in Syria, destroying Iranian equipment and killing a number of pro-regime militants and potentially some Iranian operatives too. There are conflicting reports about whether the attack has come from Israel or from US and British forces. Mother Jones senior correspondent Shane Bauer has reported that in the last week the US has directly engaged pro-regime militants in Northern Syria (including Iranian backed forces) despite ostensibly being there only to fight ISIS, in a manner that would indicate a substantial shift in strategy.

“This is much more significant than the spectacle a couple weeks ago of the US bombing empty buildings. Today, the US and its allies fought the regime over *territory* and killing [sic] many. This is a sign of a much more entrenched war than the US has been letting on.”

The complex, mutable war in Syria continues to undulate, past the Trump centric drama of the chemical attack and its heroic retribution, back into amorphous regional proxy conflict. In the context of the appointment of Iranian hardliners such as Bolton and Pompeo to senior positions in the Trump white house, and the commensurate signalling toward a potential end of the Iranian nuclear deal, these aspects of the Syrian story continue to have a significant public interest remit. It is too easy for the circus to move on to next controversy. Wolf’s criticism is a good opportunity for all of us, not just the White House press corps, to reflect on what role we play in granting Trump freedom not only to set, but smother the agenda.

Posted on
April 30, 2018
Posted by
Ciaran Gillespie
Posted in
Uncategorized