Another reason why I chose to visit Canada during the Spring vacation instead of Summer was because I was considering moving over after graduation. As you guys may know/noticed, almost everywhere is getting increasingly difficult to obtain a working visa.. There’s no harm trying though! 🙂

So I took a plane to Vancouver and took a tour up the Rockies, which was absolutely amazing! Could only take a tour up because I don’t have a driver’s license and it is actually dangerous to drive up if you are not sure of your way! Went to Banff mountains and the downtown (which is their “city” area, similar to CBD, where they have a lot of shops and restaurants). Banff is a resort town in the province of Alberta, within Banff National Park. The peaks of some parts of the Rocky Mountains can be seen in its skyline. It is also home to wildlife such as elk (deer family) and grizzly bears. Just look at how thick the snow is! This is taking during one of the resting points on our way up to the mountain! My picture doesn’t do justice to the beauty of the place! I would definitely be back again! I just love how the snow covered the mountains, which isn’t a common sight for me since I’ve been living in Singapore for the last 20 years. Just FYI, Singapore only has summer all year round, ranging between 28 to 37 degrees.. The only “snow” I’ve seen when I was younger was only a man-made snow in a place called Snow City in Science Center.. If you’re a Singaporean, you would get me. 😉 We finally reached our destination! We’re really lucky as this is the last few weeks they are open to public because the ice is melting, hence it wouldn’t be thick enough for people to ski. The view is really breathtaking and of course, I was blessed to have a good weather too! The people I met in Canada has been really friendly, welcoming and warm. This guide beside me showed me the directions around the mountain we’re on with the map behind us! He is absolutely amazing! I tend to find myself in random conversations with strangers, which is something I really enjoyed having. I would say that travelling abroad for studies has really broadened my horizons and allowed me to gain more confidence in public speaking. Independence is definitely something I learnt from the two years spent abroad.

Moving on, we went to the hot springs and Lake Louise the following day. What I am standing on is actually the frozen Lake Louise taken from the Fairmont! 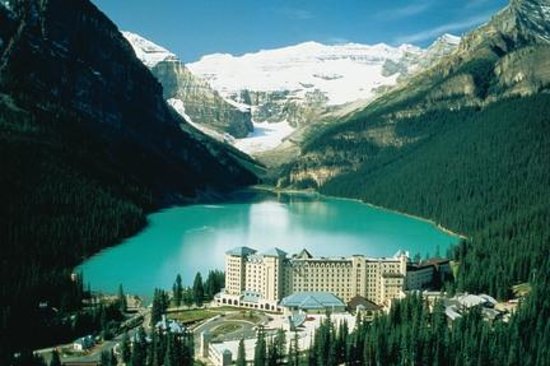 Just to give you an idea of how the place looks like, this picture is taken from an online source. I was standing on the “greenish-blue” water.

I would say, the Rockies has completely thrown me off! Even during our trip back from the Rockies to Vancouver downtown, the resting points just looks so peaceful. I would love to read a book on one of the benches.

Next up would be my trip to the Vancouver Island!