The call to arms (or cameraphones) of the #100HappyDays challenge began with Dmitry Golubnichy deciding to publicly document daily moments of happiness, as a response to finding himself in a ‘trap of sadness’ at the end of 2013. The premise is simple; for each day, he would post an image of something that made him happy, on social media, using the hashtag #100HappyDays. Last December he set up a website inviting people to take up the challenge. On the face of it, the #100HappyDays challenge seems a good thing  – who wouldn’t want to be happy, and to see more happiness around them? 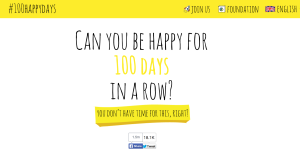 The challenge takes place in a very particular social and cultural context. Echoing popular narratives from positive psychology, self-help and makeover, it presents happiness as a skill that requires practice and commitment, much like a fitness regime. Writing on #100HappyDays in the Huffington Post, Business mentor and coach Bev James framed it ‘as training our minds the way an athlete may train for their sport: to achieve happiness, we have to regularly practice it and master the skill’.

While the idea of self-improvement is certainly not new, the notion that individuals have a responsibility to work on themselves has become a defining feature of neoliberal capitalism. This role of self-transformation has been well documented by researchers in recent decades. Ros Gill has examined how sex advice in magazines asks readers to become entrepreneurs of the self, and we explored this together by looking at makeover television. Bev Skeggs and Helen Wood have argued that individuals are increasingly called upon to demonstrate their value through visible transformation – exploring the class dimensions of this in reality television.

Wood and Skeggs’ work shows that visual performances of self on reality television are evaluated not only by the show’s ‘experts’, but also by the audience. Their research illustrates how people take up social class positions through their discussions as the action unfolds onscreen. Similarly, likes, comments and retweets online offer a space through which the self is recognised and evaluated by others. I am interested in the emotional, affective nature of such interactions, and how images carry different kinds of value in different social contexts.

Borrowing from Meg Barker, we could ask what #100HappyDays, as a social interaction and production of visual media content, opens up and closes down: What kinds of images get to ‘count’ as ‘happy’? Are some images seen as more ‘successful’ performances of happiness than others? How do the online interactions and circulation of particular kinds of images produce particular versions of ‘happy days’? And what does it mean to be asked to find a moment of happiness in an otherwise sad or distressing day?

Dmitry Golubnichy suggests that people taking part could capture the ‘little’ things – even on days when things are going badly, a moment, however small, could remind you that it is still possible to be happy. Such a framing is refreshing, in some senses, in contrast to narratives of happiness as about achievement or success.

However, perhaps #100HappyDays also contributes to a requirement to perform a different kind of achievement – that of achieving happiness. Sara Ahmed’s book, ‘The Promise of Happiness’, explores the positioning of happiness as a goal, and troubles the notion that this is straightforwardly good. Ahmed explores how certain kinds of things come to be seen as ‘happy’, while others become associated with unhappiness. Such associations, she argues, are not neutral, but have long histories. One example Ahmed uses is the image of the ‘happy housewife’, a figure that has circulated in different times as an image of national stability, tradition, feminist critique and postfeminist consumption. Ahmed argues that the histories of happiness are also often histories of oppression:

‘While the fantasy of the happy housewife conceals the signs of domestic labor under the sign of happiness, the fantasy of the housewife becoming happy through being liberated from the home might also conceal the labor of other women, who might be required to take over “the foaming dishpans”’.

Ahmed argues that those who struggle against inequality often become positioned as causes of unhappiness, dismissed as an ‘angry black woman’,  ‘feminist killjoy’, ‘melancholic migrant’, or ‘unhappy queer’. She suggests that unhappiness can sometimes reveal injustices, challenge smooth narratives and point to the possibility of creating a different future.

In the ‘turn to happiness’, as Ahmed terms it, happiness has become something which can be measured and tracked, linked to economic prosperity by policymakers. Barbara Ehrenreich has critiqued the adoption of positive psychology in corporate and policy rhetoric, in which individuals are encouraged to adopt ‘positive attitudes’ in the face of unemployment and poverty.

Such narratives of individual responsibility form part of the rhetoric of meritocracy, in which thinking positively, trying hard and a positive attitude become signifiers of success. In a blog post for the celebyouth project, Kim Allen has explored US celebrities Pharrell Williams and Will Smith’s associations with ‘happiness’:

‘That both of these men have come to be associated with happiness is compelling. In their happiness, their gratitude for their success, their refusal to speak of or use the language of racism, Will and Pharrell create ‘shiny surfaces’ that conceal racism and appease our white guilt. They are not melancholic killjoys, angry or fixated with injury. Neither are they harbouring over ‘sore points’. Both carry the injunction that those of colour must ‘get over it’ : pick the ‘right side’ and move on.’

The #100HappyDays website claims that 71% of people who have attempted the challenge have ‘failed’. Not to document happiness, therefore, is presented as evidence of a failure of emotional labour – that we ‘simply [do] not have time to be happy’. Following Ahmed, I do not wish to romanticise unhappiness, but do think that presenting the performance of happiness online as a daily goal potentially presents other, more painful feelings as things that can (and should) be ‘overcome’ through self-work. There is so much to be angry and sad about. The anger and sadness people feel about the ongoing blockade and killing of people in Gaza, for example, can mobilise us to act in solidarity. At the same time, some people have used #100HappyDays to document everyday acts of political resistance, as happiness among moments of anger or sadness.

In pointing to this tension, I do not wish to pit happiness and unhappiness against each other. Nor do I wish to suggest that there is a simple ‘reading’ of #100HappyDays, which is likely to be experienced in many different ways by people taking part or reading the posts. However, I think that by turning our attention to how particular kinds of emotions and self-representations are valued online, we can understand something about the operation of power in everyday life.

Please note: Blog entries reflect the personal views of contributors and are not moderated or edited before publication. However, we may make subsequent amendments to correct errors or inaccuracies

What role do students’ unions play in today’s HE system?