So as many of you may know, Trump’s inauguration was this past Friday. And as many of you may also know, a whole bunch of strong, powerful women and men in America took a stand for human rights the following day in the big Women’s March in Washington and cities around the U.S. You may also know that it was the biggest protest in history, with marches also happening in major cities around the WORLD. January 21st, 2017 is now an important day in history and a day to remember, much more so than January 20th, 2017, the day Trump said would be marked in history. I was SO happy I got to be a part of all of it in the march that took place in London with some of my high school friends from Chicago and over 100,000 other Americans and Brits. I felt powerful being able to take part in America politics even from across the world. The enthusiasm in the crowd left me with goosebumps and the camaraderie we all felt amongst each other left me feeling safe. I was a little nervous going into it because it was my first march, but I’m unbelievably glad that I had access to it in London and was able to be there. My intuition tells me this will not be the last time I march. 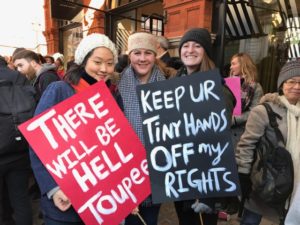 There were some incredible signs out there, as I’m sure many of you have seen in the news and buzzfeed and what not, but one of my favorite sign was unique to being in London. In the arms of one of the statue lions in Trafalgar Square, someone placed the sign, “I am woman, hear me ROAR”. This is a lyric from Helen Reddy’s 1972 song “I am woman”, which was said to be the anthem of the women’s liberation movement in the 70’s. And I have to say, that was exactly how I felt in that moment. 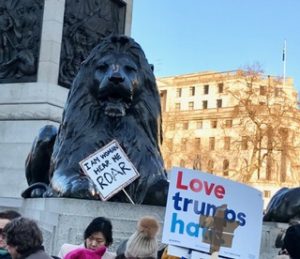 It was so incredible to see so much support from people marching all around the world. As more than 100,000 people showed up to the London protest, the tubes in London and the streets were crazy packed with people and handmade signs. It was a beautiful sight.

Something you notice while living abroad is how invested so many people from around the world are in American politics. Being someone who tries to stay away from politics for the most part, my friends at University of Surrey from the UK to Italy to Trinidad know more than I do about the political happenings in America, in addition to what’s going on in their own country. American politics are ubiquitous. And people will ask who you voted for and about your political opinions, more so than I encountered in the U.S. where people were less likely to ask about your stance so directly. It’s pretty cool to see what the rest of the world thinks about American politics first hand.

Halfway Through my Placement Year