As we steadily move towards Remembrance Day where we all stop and remember those who have lost their lives serving in the armed forces and because this year is also the centenary of the start of World War One it seems appropriate to focus on those members of Battersea Polytechnic, the founding institution of the University of Surrey, who fought during 1914-1918.

Firstly it is worthy of noting for those who are unaware that there is a War Memorial in Wates House which bears a list of all those from Battersea Polytechnic who fought and lost their lives during the 1914-1918 conflict, in the same location is a board which lists those from Battersea Polytechnic who were awarded military awards during the conflict.

During this time of remembrance please do go and view these and remember those who fought.

Within the University Archives we have a collection of Battersea Polytechnic Magazine, this was produced and published by the Students’ Representative Councils of day and evening students.  The magazine was in circulation from 1908-1931 and as such provides a valuable source for research into the 1914-1918 years. 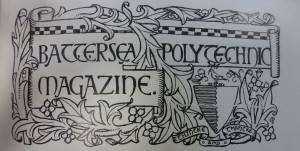 For anyone who is interested in the reaction of Battersea Polytechnic  to the war then these Magazines really do provide a wealth of knowledge to any researcher.

Battersea Polytechnic Magazine and the War.

The November 1914 Battersea Polytechnic Magazine was the first published since war was declared and begins with an editorial declaring ‘Never have we started a new volume at such a time of strife and unrest.’

The editorial goes onto list ‘with much pride and pleasure’ those who had already volunteered to join the armed forces, 10 members of staff, 203 students and 2 members of the governing body by this stage had signed up. The edition also includes letters sent to the principle from students serving in the armed forces.

Throughout the course of the war Battersea Polytechnic Magazine would continue to list those who served in the war and also as the war progressed a Roll of Honour was included, from January 1915 onwards listing those who were killed in action.  Touchingly the Magazine includes photographs of those who had fallen alongside the Roll of Honour. 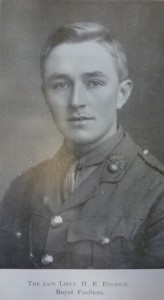 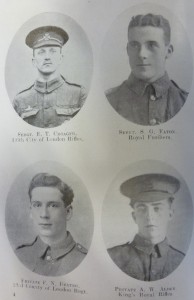 As well as the Roll of Honour and Roll of Distinction the Battersea Polytechnic Magazine contains much more information about how the Polytechnic supported the war effort, through a War Fund, Concerts, the Women’s Relief Corps together with photographs of students supporting the war effort in classes.

On this month of Remembrance I think it is apt to show the reactions to the armistice in the first publication of the Magazine after the War ended.  There certainly was a sense of relief and joy presented in the magazine with the editor declaring ‘We do not attempt to describe the intense excitement, the enthusiasm, the joy that these last few days have brought with them’ 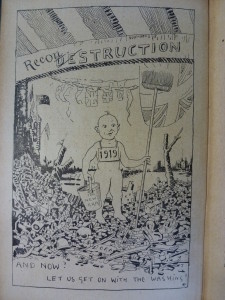 In this post I would like to draw attention to one individual in particular who was a student of the Polytechnic, studying Engineering, and having been awarded the Wells Medal before leaving the Polytechnic in 1914.

The man in question was Lieutenant Frederick Johnson who was awarded the Victoria Cross, the highest military honour.  He was awarded his Victoria Cross when he was just 25 years old during the Battle of Loos, during an attack on Hill 70 in the Artois Offensive on 25 September 1915.  The official citation, taken from the London Gazette, dated 18 November 1915 reads:

For most conspicuous bravery and devotion to duty in the attack on Hill 70 on 25th Sept., 1915. Second Lieutenant Johnson was with a section of his company of the Royal Engineers. Although wounded in the leg, he stuck to his duty throughout the attack, led several charges on the German redoubt, and at a very critical time, under very heavy fire, repeatedly rallied the men who were near him. By his splendid example and cool courage he was mainly instrumental in saving the situation and in establishing firmly his part of the position which had been taken. He remained at his post until relieved in the evening.”

The Polytechnic wished to commemorate this achievement of a former pupil and decided to commission a portrait to present to Frederick Johnson, a duplicate of the portrait was also created which is now part of the University Art Collection. 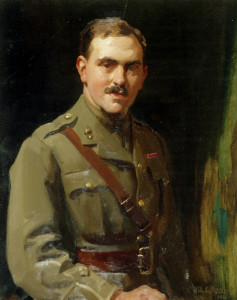 For more information about the art collection contact arts@surrey.ac.uk

Once back at the Front he rose to the rank of Major, sadly he was killed in action on 28 November 1917 during the Battle of Cambrai.