Alex has recently been longlisted for the Polari Prize, a prestigious award for LGBTQ+ literature, for his first novel and we spoke to him about his writing, research, and advice for budding novelists. 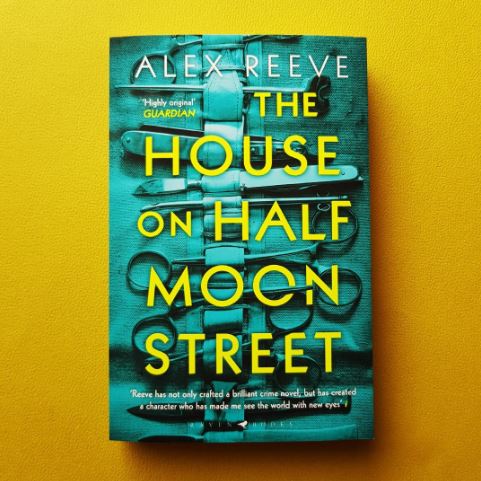 What is the novel about?

My debut novel, The House on Half Moon Street, is a Victorian crime story set in London in 1880. Leo Stanhope is an assistant to a surgeon of the dead and is in love with Maria. When Maria turns up dead on the slab, he sets out to find her killer. But Leo himself has a secret; he was born Lottie Pritchard. So, he has to solve the crime while not giving up his own freedom or his life.

Tell us about the process of writing the novel and what interested you in the subject?

Lots of research! I’m a stickler for details. I’ve spent entire days working out the colour of a bridge in 1880, bus timetables, road names, medical procedures and obscure pharmacological products. For me, writing fiction is all about threading truths together to make something new. Of course, given Leo’s background, I also researched transgender lives in the 19th century thoroughly and engaged with that community today.

I was interested in the topic because the literature of the time excluded transgender people, who definitely existed but were oppressed by society. I wanted to put them back. I believe we owe it to them to reflect their lives as best we can. And, of course, I thought it would make a good story!

What advice would you give to others who would like to write a novel?

Firstly, write as much as you can. Don’t wait for ‘inspiration’, just get on with it. Write as if no-one will ever read it. You can always edit it later, but you can’t edit a blank page, so write, write, write. Also, never try to guess what ‘the market’ wants as you never will. And finally, read as much as you can, because reading is wonderful, and you can learn so much from other authors.

What is the award and what does it mean to you to be longlisted?

I’m totally thrilled to have been long-listed for the Polari Prize, which is a prestigious award for LGBTQ+ literature. I find out whether I’ve been short-listed in late July.

This follows some other nominations too; the novel was a Richard & Judy Book Cub pick in January, has been long-listed for a Crime Writers Association award and was short-listed for the Royal Literary Society Christopher Bland prize (won by The Salt Path by Raynor Winn). I never expect to be nominated for anything, so it’s a huge surprise when it happens!

What is your PhD thesis about and what interested you about the research?

My PhD thesis is about representations of transgender characters in neo-Victorian novels – ie those written today and set in the 19th century. It’s obviously relevant to my novels, and exploring the topic in depth, and with expert guidance, is very satisfying. I feel it makes me a better writer. I also speak about the subject at literary events and am just starting to do a little teaching as well, so having that base of knowledge is critical. Whenever I talk to people, it’s always fascinating to share insights and hear their experiences, especially if they’re in the trans community. The support has been overwhelming.

Describe your research in 3 words

What are you do you hope to do when you finish your PhD?

I want to do more! More novels, more research and more teaching of creative writing. I’d like to publish some purely academic papers as well.

The second in the series, The Anarchists’ Club, is out now in hardback from Bloomsbury.