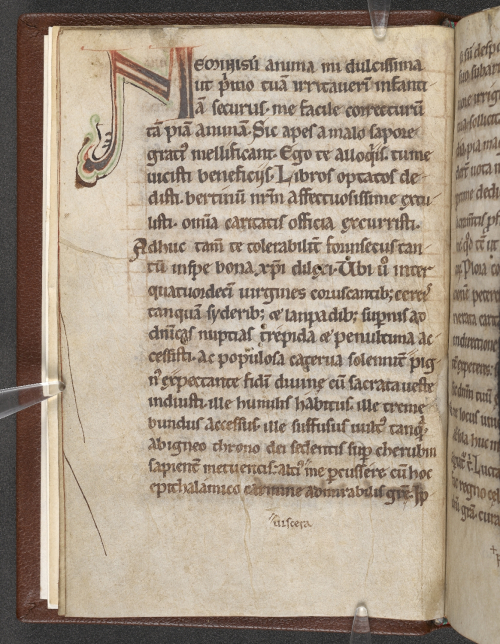 In textual criticism a manuscript is referred to as a ‘witness’ because it provides evidence concerning the history and transmissions of a literary work that can be used, at least in theory, to reconstruct an authentic or original text. The courtroom connotations of the term are elaborated upon by Bernard J Muir in his essay ‘Interrogating a Manuscript Witness’  in which he writes:

Sometimes we know who most of the witnesses are, but the whereabouts of others, suspected of being party to the event, are unknown or were once known but have now gone missing. Once the witnesses are finally discovered and interrogated, they invariably offer conflicting accounts of what they have been witness to and it is the duty of the interviewer to resolve apparent contradictions and determine what actually happened, sometimes long, long ago, far, far away.

However, this sort of interrogation is only possible if multiple witnesses have survived, and it is not uncommon for early texts to come down to us in only one version. Indeed some of the most famous and well-loved works of medieval literature, including Beowulf (British Library, Cotton MS Vitellius A XV)  and Sir Gawain and the Green Knight (British Library, Cotton MS Nero A X), are attested to by single witnesses.

This is also the case for a number of works that I am examining in the project ‘Women’s Literary Culture Before the Conquest’  and indeed there is reason to think that a disproportionate number of texts written by and for women were destroyed either deliberately or by accident.

An example of such a unique witness is the Liber confortatorius [Book of Consolation] written by the monastic hagiographer Goscelin of St Bertin (c.1035- after 1107), which is found in British Library, MS Sloane 3103, fols.1r-114v. Goscelin wrote the Liber shortly after 1080, and addressed it to his former pupil, a young nun called Eve (c.1058-c.1125) who had recently left Wilton Abbey in Wiltshire to become a recluse in Angers.

In this post, rather than focus on issues of traditional textual criticism, I will approach the Liber and its single surviving manuscript from a much more contemporary or presentist angle. Sara Ahmed has recently argued that one of the responsibilities of ‘living a feminist life’ may be to explore and contest ‘histories that have become concrete, histories that have become solid as walls’ (Living a Feminist Life, 1).  The victimization of women is one such history, and as a feminist critic this is something I feel I should address, especially in relation to a text that, for me, makes such uncomfortable reading.

The Liber is a book for and about Eve. In other words, Eve is not only its intended audience, she is also its subject. At the heart of the text is an account of the close spiritual friendship that, according to Goscelin, united him with Eve while they were both still in Wilton.

From a modern perspective this friendship and Goscelin’s response to its abrupt ending send out a series of warning signals. The description of the intense, arguably erotic, love between the monk and his pupil is extremely disturbing: Goscelin was around 23 years Eve’s senior, and she was only a child when he first assumed responsibility for her instruction. The fact that, according to Goscelin’s own account, Eve left Wilton suddenly without telling Goscelin of her plans indicates that she wanted to escape from him. And the fact that, despite her decision to cease all contact with him, he insists on addressing this extended epistolary treatise to her proves that he is unable to let her go.

Of course, as medieval scholars, it is tempting to explain away the most uncomfortable aspects of the text in order to reassure ourselves about the ‘purity’ of the relationship that underpins it. Most obviously, we might remind ourselves that spiritual friendships based on Christian devotion between women and men were not uncommon. We might also seek parallels in other medieval teacher/pupil relationships, such as that between Héloïse and Abelard, although quite frankly we are skating on thin ice there, even though, as Irina Dumitrescu has shown us ‘the entanglement of pain, desire and teaching … is deeply medieval’.  And of course, we might see the whole premise of the Liber as an elaborate topos, with no foundation at all in reality. In other words, we might read the text as rhetoric not reality, fiction not fact.

It seems likely that Goscelin did not want the Liber to be copied and disseminated. In the Prologue he figures the Liber confortatorius as an intimate communication, one not intended for public consumption. He expresses his concern that someone other than the addressee might take possession of the text and includes the entreaty that, should the letter go astray, the finder is to give it back to Eve, ‘for whom alone it is manifestly intended’ (Book of Encouragement, trans. Otter, 19).

This desire for privacy or confidentiality may, like the representation of the teacher/pupil relationship, be rhetorical in part, but it is quite plausible that Goscelin was worried about what would happen if the Liber fell into the wrong hands. Close spiritual relationships were often the subject of gossip, even in the Middle Ages. Indeed, as Kathryn Maude observes in her recent essay on Eve and the ‘Rhetoric of Solitude’, later in life Eve is reported to have enjoyed another chaste friendship, this time with the recluse Hervé of Vendôme, which was evidently regarded with suspicion by some.

The epistolary form of the Liber confortatorius may also be more than literary commonplace. Goscelin hopes that Eve will not only receive and read his extended letter but actually reply to it. He also records that, when Eve was still in Wilton and he was travelling, the two of them had corresponded: ‘My parchments and tablets frequently brought Christ to you; and chaste letters from you were not slow in coming’ (Book of Encouragement, trans. Otter, 25). He depicts the Liber as the continuation of this previous communication and implies that a response will or at least should be forthcoming: ‘a letter shuttling back and forth can reconnect us and keep us warm’ (Book of Encouragement, trans. Otter, 21).

None of the earlier letters exchanged by Goscelin and Eve now survive. The only evidence we have of their existence, and thus of the spiritual friendship between Eve and Goscelin, is found in the Liber itself.

Likewise it is has been remarked that we have no proof that Eve ever received the Liber or even that Goscelin actually sent it. We can of course interrogate the manuscript, but it seems resistant to giving us any solid answers.

Sloane 3103 is a twelfth-century manuscript produced after Eve’s death, which occurred in or around 1125. It isn’t clear whether it is copied from Goscelin’s own holograph or a later version. This text of Liber may well have been copied in the Abbey of Saint-Sauveur-le-Vicomte in Normandy where Sloane 3103, which was initially bound in two parts (fols.1r-115v and 116r-122v), was subsequently housed. There appear to be a number of scribal hands at work in the manuscript. The Liber is the first item and it is followed by a variety of textual and musical material relating to St Thomas Becket (fol.114v) , St Katherine of Alexandria (fols.115r and 116r) and St Bartholomew (fol.115v), the Brevis relatio (a brief history of William of Normandy: fols.116v-121v)), a genealogy of English kings (fol.121v), a letter from Bernard of Clairvaux to Pope Eugene III (fols.121v-122r), an excerpt from the treatise ‘On the Triple Abode’ once attributed to St Augustine of Hippo (fol.122r) and, finally, an antiphon (fol.122v).

Clearly the Liber was regarded as being of sufficient spiritual importance to be preserved in a monastic library alongside other devotional and historical material, yet there is no direct connection to Eve or her immediate locality. The Abbey of Saint-Sauveur-le-Vicomte is located some 165 miles north of Angers (in other words, quite a distance away from where Eve settled). We can only speculate about how a copy of the Liber turned up in Normandy, about how closely Sloane 3103 is related to the manuscript that Goscelin produced, and about who made the decision that it should be copied and preserved.

But as the map below makes vividly clear it does look like the Liber was dispatched to Eve. Perhaps it never made it to its destination. Or perhaps Eve refused to accept it and tried to send it back. It may well have found a more receptive audience amongst a community of monks into whose hands it passed on its travels, and who made the decision to make at least one copy. 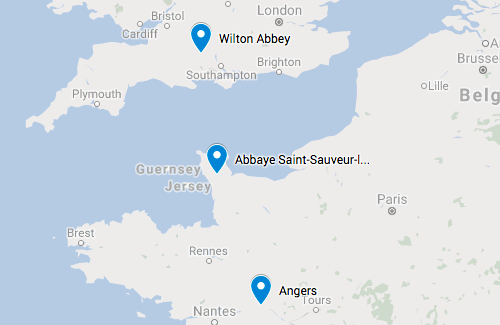 Google Map showing the location of Abbey of Saint-Sauveur-le-Vicomte in relation to Wilton Abbey and Angers.

In the light of the recent #MeToo and Time’s Up movements and the campaign to end sexual harassment in higher education spearheaded by the 1752 group, I want to suggest here that, finally, time’s up for Goscelin of St Bertin. Within the Liber confortatorious, Goscelin comes across as obsessive, possessive, petty, and at times vindictive. The Liber gives voice only to the desires and frustrations of the deserted Goscelin. Eve remains resolutely silent about a relationship that from a contemporary perspective appears at best unequal and at worst abusive.

If Eve did receive and read the Liber, was she pleased by it or repelled? Did she hope it would be copied and disseminated or suppressed? The existence of Sloane 3103, a manuscript copied in France, albeit many decades after it was written, gives me pause for thought. What part, if any, did Eve play in securing the Liber’s survival? It is impossible to know. But the provenance of this manuscript is significant. From my own twenty-first century perspective, I can’t imagine that Eve would have enjoyed reading this book which idealizes and seeks to reignite a relationship that she had left behind, and as a feminist I find myself hoping that she did indeed reject it outright.

Sloane 3103 is the best, indeed the only remaining witness, but it chooses not to give up any secrets.