As I was writing this blog, reports came in of a church shooting in Texas, resulting in the death of 26 members of the congregation and at least 20 injured. The media focus thus far has been on preventative strategies such as arming volunteers at church services.

A week ago, I was invited to a church service in Tuskegee and had privileged access to the congregation’s reflections on, and celebration of,  their faith. The service was more participatory than any I had experienced previously and included uplifting singing and music. Towards the end of the service there was an invitation to help with a drive-by food bank. On the following morning, I joined with volunteers from two churches to prepare food bags to distribute to 165 families who queued in their cars to collect a range of drinks, vegetables and other groceries. There was a good deal of humour and banter between volunteers and food recipients. Good people from different churches doing ethical work.

This week I am attending the American Public Health conference in Atlanta which is on the theme of: ‘Creating the Healthiest Nation: Climate Changes Health’. The introductory talks and films left the thousands of participants in no doubt that climate change is real and there is a need for urgent action to slow down the potentially devastating consequences for the environment, human health and for other species. ‘Health’ several speakers said, is a right, not a privilege.

A center that brings together rights and church is the Center for Civil and Human Rights which I visited this afternoon. The center details the story of the US Civil Rights movement and connects this with global Human Rights. The story is compelling and impactful. One of the most challenging aspects is the simulation of a sit-in where you are invited to put on headphones and to experience abusive messages and feel as if  your chair is being kicked. You are asked: ‘How long can you last? Put on a pair of headphones and put your hands flat on the designated areas.  Experience a simulated response to your non-violent protest and see how long you can keep calm with your hands steady on the counter. Try it with your eyes closed.’ (see www.civilandhumanrights.org). 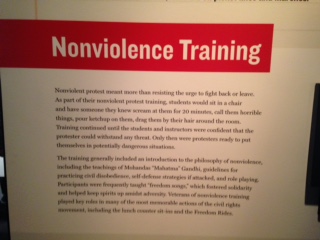 When I arrived in Tuskegee just over a month ago, I knew little of the intensity and reach of church activities in the southern states. I recently read Albert Raboteau’s book ‘Slave Religion’ which helped me better appreciate the history and complexity of African-American religions. Until today, I had not appreciated how pervasive and strong the role of the churches was in relation to the civil rights movement. The religious beliefs of Martin Luther King is evident in his talks and writing and it is clear that much civil rights activity was influenced by church teaching.

So a church massacre, a drive-by food bank, civil rights…

What can be said that they have in common is that they relate to different aspects of public health.  It was clear that there was a need for the food bank provisions which make some contribution to improved family health. It was repeated several times at  today’s conference is that health is a human right. This right is not as yet established. Regarding a public health perspective on gun violence, you might find this piece by Steve Miles of interest – https://www.minnpost.com/second-opinion/2013/04/guns-and-bioethics-qa-steve-miles

A just and loving eye…?