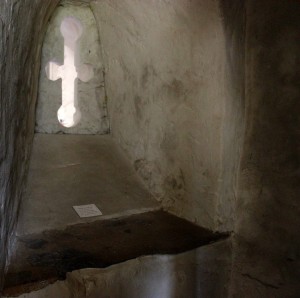 A.S. Byatt’s Booker prize winning novel Possession (1990) opens with the dramatic discovery of drafts of two previously unknown letters in the pages of a long ‘undisturbed’ book in the London Library. The letters are in the hand of a (fictitious) famous Victorian poet. The person who finds the letters is a research assistant to an eminent professor. On a shockingly unscholarly impulse, this very junior academic steals the letters, and his act of momentary madness leads him on a journey of scholarly investigation, and of self-discovery.  Such stories are only found within the pages of a book, not in real life. Or are they?

When Professor Sebastian Sobecki of the University of Groningen recently came across a fifteenth-century letter referring to one John Kempe in an archive in Gdańsk he reacted with impeccable professionalism.  One reason this document is so important is that it confirms the identity of the son of a woman called Margery Kempe. Kempe was a visionary and pilgrim and her largely autobiographical account of her life and revelations provides us with one of the first examples of women’s writing in the English language. It is also one of the most problematic examples of woman’s authorship, because Kempe, it seems, could neither read nor write.  Kempe discusses her (unnamed) son in her book, describing him as a merchant based in the Baltic port (at the time under Teutonic control), and indicates that he assisted her in its production by acting as her scribe.

Sobecki discussed all that he had uncovered in a paper delivered at the New Chaucer Society Congress at Reykjavick in the summer of 2014, and he contextualizes it further in an article forthcoming in the journal Studies in the Ages of Chaucer. The Guardian  has also published a piece on this exciting research. In addition, Sobecki has written a post for this blog describing how he set out to look for evidence of Margery Kempe’s son because he knew that many Gdansk town council records still survived:  ‘It wasn’t long before I stumbled over a Latin letter, issued on 12 June 1431 to one John Kempe’. This major feat of literary detection was not happenstance. Sobecki knew what he was looking for, and he knew where to start looking.

Serendipity has a role to play, but the reality is that research is painstaking, and incremental in its development. For example, in an article in the TLS, Professor Anthony Bale, who recently published a fine new translation of Margery Kempe’s book, has carefully reconstructed from manuscripts and records now held in Cambridge, London and Norwich the life and work of one Richard Salthouse, the man almost certainly responsible for copying out its only extant manuscript.

Sobecki’s announcement mirrors events that unfolded in 2004, when Professor Linne Mooney identified the scribe who worked on the two most authoritative manuscripts of Chaucer’s The Canterbury Tales as one Adam Pinkhurst.  But according to Mooney, her discovery was no coincidence either. She was the right person in the right place: ‘Lots of people have looked at these records before, but they did not happen to be people who were working on scribes’. Mooney’s finding led to the reassessment of a short poem by Chaucer addressed to a scribe called Adam. Previously read allegorically and figuratively, her research pointed to a more literal, playful meaning. More fundamentally, while controversial (some scholars are sceptical about, or disagree with Mooney’s claims), Mooney’s work has certainly redefined, and revitalized, the field of manuscript studies.

What unites all of this archival scholarship is what it reveals about the nature of authorship in the Middle Ages, and in particular the importance of the relationship between author and scribe. In a pre-mechanical age, books were produced by hand, and the act of writing was seen as manual labour. Consequently, both men and women, whether highly literate or lacking any formal education, viewed trusted scribes as worth their weight in gold. Writing was not a single person activity, but the result of collaboration, not only between writers and scribes, but within wider networks of patronage and readership. It is largely as a result of this combination of painstaking archival research and serendipity that we now recognize that women as well as men were very much part of the literary culture of the Middle Ages.