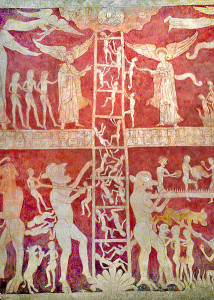 One area within medieval studies in which there is widespread scholarly recognition of the interaction of the religious and literary cultures of women and men is the field of anchoritic studies. Anchoritism was the practice of seeking a closer relationship with God by withdrawing from worldly affairs, receiving the last rites and submitting to enclosure in a sealed cell which was usually attached to a church.

As ankeres and eremites that holdeth hem in here selles,

These early lines in William Langland’s Piers Plowman illustrate the perception that through enclosure anchorites were less likely to be troubled by worldly temptations than their fellow Christians and the mendicants whom Langland attacks so virulently. In evincing threats to Holy Church, and the consequent need for repristination (the ideal of a revivified Church that rejects corruption and conceives of Christ within the soul) both Julian of Norwich, a female recluse in fourteenth-century Norwich, and Langland, possibly a member of the minor clergy living in London, draw upon and engage with the biblical Apocalypse. Julian’s anchoritic intercessory role and privileged status as recipient of divine revelations set her in the physical liminal space of her cell as a conduit between heaven and earth. Langland’s literary reapplication of the Apocalypse and Julian’s meditations on her showings stem from their shared cultural and theological knowledge. The contemporary scourges of war, schism and plague contributed to their apocalyptic thematic focus with its emphasis upon the last things and spiritual warfare.

Reading the work of Julian and Langland side-by-side shows us how different their perspectives are. My research has revealed that Julian’s often nuanced engagement with the Apocalypse in her Revelations of Love is more extensive than previously thought. She draws particularly from the earlier and later parts of the Apocalypse, adopting a heaven-focused Christological perspective. Through her thematic and stylistic elements Julian considers the spiritual and universal concerns of the Apocalypse. Through recontextualising elements of John’s vision of the Apocalypse, Langland, in contrast, adopts a loose ‘template’ based upon Apocalypse 1-17, with allusions to later sections, for his reimagining of figures and textual concerns. I have discovered that a Bakhtinian reading of his Lady Meed personification illuminates his nuanced treatment of the Whore of Babylon. Julian, on the other hand, implicitly attempts to rehabilitate Eve’s reputation through omission and through allusions to the Woman Clothed with the Sun of Apocalypse 12:1-17 as Eve/Mary. Herein both Langland and Julian recognise the universal applicability and figurative readings of the Apocalypse.

Whereas Langland overtly satirises greed and corruption, Julian more subtly guides her audience towards ultimate salvation, frequently echoing Christ’s exhortations and injunctions to endure to the seven churches of Asia Minor in Apocalypse 2-3 as she cautions against empowering sin and the devil, which are otherwise defeated. However there are similarities in the approach of both writers. The mutual emphasis of Julian and Langland upon salvific mission through the Incarnation, continued by believers under divine guidance and the tenets of the Church, evokes Christ’s message in the same chapters – although Julian makes no reference to divine wrath at human deviations from God’s will. In her Parable of the Lord and the Servant the servant is tested and prepared for heaven through tribulation – the first Adam in his labourer’s clothes and the second Adam (Christ) glorified. This illustrates the hypostatic union (the union of Christ’s humanity and divinity) and Incarnation and is comparable with Langland’s depiction of Piers as the conquering Christ during the Passion. For both Julian and Langland, this interconnectedness underscores the importance of ensuring that repristination occurs through the earthly pilgrimage, seeking the Church’s worthiness to be granted the epithet Bride of Christ.

In Julian’s ‘throne room’ vision she is shown the company of the saints (Revelation, 14, 2-9), which resonates with her broader heaven-attuned focus, encompassing her comprehension of the interconnectedness of her evencristen (or fellow Christians) and the Church Triumphant, Church Militant and Church Expectant. Whilst Langland and Julian both follow Augustine’s depiction of Christ as conqueror of sin and death, Julian also adopts and develops the Augustinian terminology of the city of God in her Christologically-focused concept of Christ in the soul as a city (based on Apocalypse 21), extrapolated to the Church body and heaven. In so doing she reveals greater optimism for renewal and glorification.

The textual engagement in Julian’s Revelations and Langland’s Piers Plowman with facets of Augustine’s reading of the Harrowing of Hell and binding of the devil illustrates this apocalyptic doctrine’s integral position within their soteriology (matters pertaining to salvation), whether in Langland’s depiction of Christ’s legal joust with the devil, or Julian’s figurative description. In the Augustinian sense, the binding renders the devil powerless to claim the souls of believers, insofar as they adhere to the tenets of the faith. Thus, whereas the Apocalypse identifies both internal and external challenges, for Julian and Langland, the threat is primarily internal. Julian, with her mind on the eschatological denouement and heaven, acknowledges this through her proleptic (future events viewed as though currently taking place) visions which reflect her optimism and liberal soteriology. For instance, in Julian’s lack of a vision of hell she also conveys implicit discontentment with the contemporary emphasis on the Lake of Fire, as distinct from the question of its existence, which she professes to accept.

Both Julian and Langland regard suffering and tribulation as normative in seeking repristination. Langland’s disapprobation of the friars in the Siege of Unity and elsewhere accords with Julian’s words presented as prophecy, ‘Holy Church shall be shaked like a clothe in the winde’ (Revelation, 28, 4-6), which evoke both the Passion and the Apocalypse. This is one example of Julian’s veiled critique of ecclesiastical failings in terms of deviation from tenets of the faith; it resonates with Langland’s social satire and prophecy of the perceived immediate and impending internally-corrupting threat of the friars which informs his anti-mendicantism as he seeks a New Jerusalem in the Blakean sense to replace the Thyatirean vision. Whether through Langland’s Mystical Antichrist, which equates to ecclesiastical corruption, or Julian’s focus on heaven as reward for enduring suffering for Christ, both writers portray the interrelationship between heaven and earth. As Langland personifies evil, Julian evocatively describes how the demons, and indeed the devil, assailed her before they were defeated. Julian’s theological understanding evidenced in the personal account of her illness and the visions elide.

Langland’s employment of the fictional versifying medium facilitates the reimagining of figures and problematises an imminent utopian solution. Whereas Julian alludes to the parousia (the Second Coming of Christ) in A Revelation 51, Langland envisages this further along the eschatological timeframe, which explains his contemporary emphasis. Julian foregrounds her beatific visions of the glorified saints, juxtaposed with the struggle of the Church Militant aspiring to join them. Julian’s awareness of terrestrial struggle does not detract from her focus on spiritual places and positive soteriology, as evidenced by her servant. Both believe that sanctification and glorification begin with earthly repristination, necessitating renovatio (rebirth or renovation) of the individual and the Church body (a fundamental message of the Apocalypse) thus anticipating the eschatological new heaven and earth. In writing ‘This boke is begonne by Goddes gifte and his grace, but it is not yet performed, as to my sight’ (Revelation, 86, 1-2), Julian anticipates her book’s role as facilitating this renovatio, including the repristination of the Church Militant before its eschatological union with the Church Triumphant, as indicated in its prophetic passages. In contrast, Langland’s poem is cyclical because Unity is unprepared for the ultimate fulfilment, since repristination is a process. Their different didactic approaches offer the modern reader a more balanced view of late-medieval hermeneutical approaches to the Apocalypse.

My research into the influence of the Apocalypse on the work of Julian and Langland illustrates the importance of not separating artificially the traditions of male and female writers and visionaries. By considering these writers together as contributors to the corpus of Apocalypse-influenced writing we enrich our understanding of the diverse approaches to this influential New Testament book during the later Middle Ages.

Programme of Events for Workshop at Chawton House Library, 21-24 July 2015