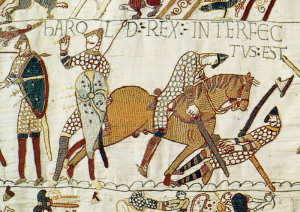 In an article in Hybrid Pedagogy, Sean Michael Morris, Pete Rorabaugh and Jesse Stommel discuss play as critical enquiry in the classroom and lament the ways in which academic rigour is often opposed to ‘collective, playful learning’. In their words:

‘Play, experimentation, and collaboration can all lead to important discoveries and deep intellectual inquiry. Yet the results of play are often overlooked because the process leading to them can’t be evaluated within traditional academic models for assessment.’

While the creative and intellectual possibilities of play are evident in some academic classrooms, particularly for practice-based subjects, there is more to be done in the field of text-based teaching and research. Indeed, there is much we can learn from the creative engagements with the medieval past by contemporary women artists and writers.

A strikingly contemporary instance of how creative arts practices, both visual and verbal, engage aspects of women’s culture in the past is Cornelia Parker’s ‘Magna Carta (an embroidery)’  commissioned for the exhibition on the Magna Carta at the British Library on its 800th anniversary. This hand-stitched embroidery, worked by prison inmates, civil rights activists, lawyers, barons and MPs, among others, recreates the Wikipedia article on Magna Carta as it appeared on 15 June 2014.

The installation is the result of a remarkable collaboration between craft and technology – word and (digital) script – and, reminds us of the often collaborative nature of women’s culture in the medieval past. Medieval women participated in the production of the written word (think of Margery Kempe) as much as they did the embroidered image (the Bayeux Tapestry).

More conventional modes of literary production, such as the novel or the poem also work to re-surface as well as re-imagine medieval women’s engagement with their own culture. Nicola Griffith’s Hild of 2013 recreates the multi-ethnic and multi-cultural world of seventh century Britain, for example, bringing to literary life the story of Hild, Abbess of Whitby, whose story before she enters religious orders is virtually unknown from the documented sources.

Eavan Boland’s reworking of the tenth century Old English poem about exile and loss, ‘The Wife’s Lament’, embeds it in a contemporary anthology about women’s relation to place, country and history, which finds inspiration for its title A Woman Without a Country’ (2014), in the work of an earlier twentieth-century writer, Virginia Woolf.

Rona Munro’s trilogy of plays about James I, II, and III of Scotland staged at the National Theatre in London in 2014 are another case in point. In her introduction to the play texts, Munro describes her writing process, saying ‘we can speculate a whole series of possibilities from the few hard facts we can rely on’. This speculation allows her to flesh out the roles of queens, and add serving women to the script, giving the audience instances of women speaking to women in the medieval past – something we find rarely in sources from the period.

In the third play James III: The True Mirror, Munro shows us women’s literacy in action as Margaret of Denmark takes on her husband’s royal accounts. By insisting on the centrality of royal women to Scottish governance in the distant past, Munro creates new frameworks for the Scottish independence debate that refuse to leave women out of the story.

Whether we look to the visual arts, novels, poems or indeed plays, it is becoming evident just how often contemporary women’s culture offers us new resources for understanding the culture of women in the medieval past.

Reading the Past: Virginia Woolf, Chaucer and the Pastons