Last week I was lucky enough to attend the first workshop for the project Women’s Literary Culture & The Medieval Canon which took place at Chawton House Library, an Elizabethan manor house in Hampshire, which is now The Centre for the Study of Early English Women’s Writing, 1600-1830. What follows is a summary of the event and the papers given. You can also read the storified tweets about the event here. 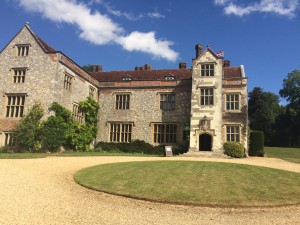 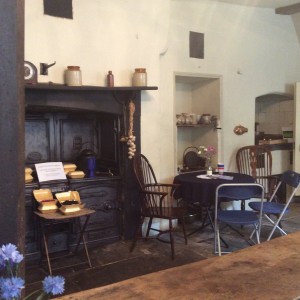 After a wonderful lunch in the Old Kitchen, and a kind welcome by Gillian Dow, Executive Director of Chawton House Library and member of the network’s Advisory Board, the event was formally kicked off with a Introductory Comments by the leader of the project Diane Watt.

Diane went through the aims of the project and ways in which we can communicate ideas including social media, the website and this blog. She also set out three main questions for each of us to think about with relation to our own papers: 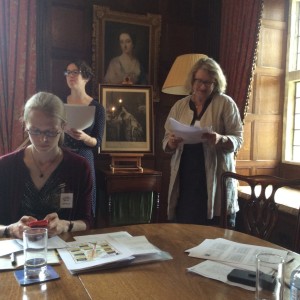 Our first paper was given by two visiting speakers, Clare Lees and Kathryn Maude and began appropriately in the Early Middle Ages. One key thing that came up throughout the paper was the importance of voice which was demonstrated by Clare reading aloud (and translating) The Wife’s Lament and a recording of Eavan Boland reading her translation of the poem.

This led to a long discussion during the question session about how important it is that we acknowledge oral culture and different types of voicing including female engagement with translation.

Following a tea-break, our earlier conversations led to an informal discussion on collaboration – What it means to be collaborative, how we write and think collaboratively and experiences that we may have had of working collaboratively.

The second day of the workshop began with a paper by Liz Herbert McAvoy. 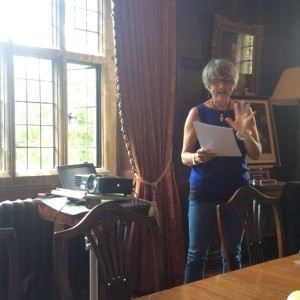 Liz focused on women’s visionary writing, particularly the works of Mechtild of Hackeborn and Margery Kempe. She considered the hermeneutics of female networks, women’s role as authoritative auctor, inter-gender dialogues and the blurring of male and women writing in the devotional literary canon.

During the questions we once more returned to the importance of translation and modern notions that there were geographical limitations for medieval travellers (particularly female writers who travelled such as Margery Kempe). Liz also discussed the fact that there is often a resistance to female authorship that is complicated when we consider the ways in which works circulated in the Middle Ages with no name attached.

The focus of my paper was a queer reading of Marie de France’s lai Bisclavret which compared the text to canonical texts such as Sir Gawain and the Green Knight and works by other male writers. It also considered how Marie may identify with the queer identities because of her own role as a female writer at the court of Henry II.

In the question session we discussed Marie de France’s role in the medieval literary canon and the ways she distinguishes her writing from male practice. 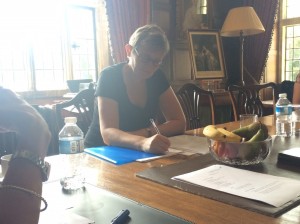 Diane’s paper examined the connections between the famous alliterative poem, Pearl, and Goscelin of Saint-Bertin’s Liber Confortatorius. As part of this her paper also explored the ways in which the female characters are presented as elusive and how the texts may have spoken to a female audience.

In the question session we spoke about the ways in which men appropriate the female voice and how there is a tension between earthly and spiritual responses in these texts and in other religious writings. 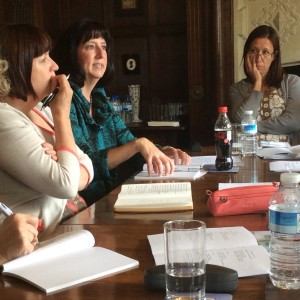 The third day of the workshop opened with Nancy Bradley Warren’s paper which focused on courtly and political Chaucerian texts which were read by religious women. Nancy stressed the ways in which these texts aligned with nun’s views and how Chaucerian tradition animated the nun’s existence in the sixteenth-century.

During the question session we discussed how the contents of nun’s libraries often go against our expectations about what medieval religious women were reading and Chaucer’s didactic role for female readers. 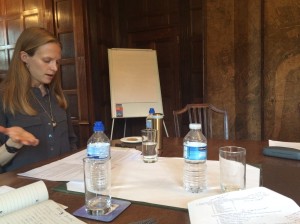 Laura Saetveit Miles’s paper opened with an investigation of the canon, the word itself, its history and female inclusion within it. She argued that the best way to think about the canon was as a container which normalizes anything that it contains. She then compared the medieval canon that we read today with what they would have read in the medieval period before moving on to what nun’s read and how this can be used to rethinking our approach to the medieval canon due to the queer challenge of devotional texts.

We then discussed what distinction there is (if any) between canon and tradition and whether one aim of the project is to disrupt the canon. 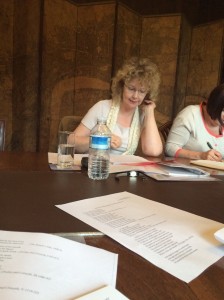 Our final paper of day 3 was given by Corinne Saunders and focused on affective reading of Chaucer and romance works. Corinne spoke about medical history and the cognitive aspects of emotion and the affect. Her paper also indicated the ways in which lovesickness is presented as an illness of the brain in Chaucer’s texts and how mind, body and affect are inscribed in complex ways in his writing.

During the question session we reflected on how Chaucer’s writing may have resonated with female readers and how the mind and body are connected and used when reading as readers were trained to respond affectively.

After a tea break we then reconvened for a workshop which focused on ways in which the network would develop and move forward following this event. We were split into two groups to discuss four main points:

My group opened our discussion by considering how we might broaden the focus to gender and how genre may be a way to unpack gender. We also discussed what types of papers/workshops might make up the Boston Event and how we could reach a wider audience. The other group also discussed collaborative blog posts and what type of database(s) we could develop to showcase women’s writing and engagement with the literary canon. 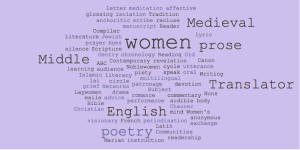 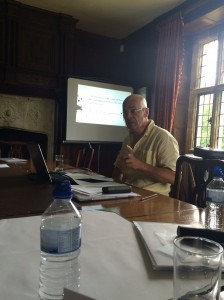 Day 4 opened with Denis Renevey’s paper which was on Eleanor Hull’s role in the tradition of the devotion to the name of Jesus. He indicated how Eleanor omits information in her translation and how she rearranges the material making her voice a significant contribution to the devotion of Jesus. As part of the session, Denis also asked us to carry out a close reading of a ‘Meditacyon of þe name of Ihesus’ from Eleanor Hull, MS CUL, Kk. 1.6.(D). This was an extremely interesting exercise as specific words were debated and we discussed the use of imagery, particularly female imagery, in the text.

In the question session we also spoke about Hull’s role as a complier as well as a translator and the multiple ways women engaged with literary culture. 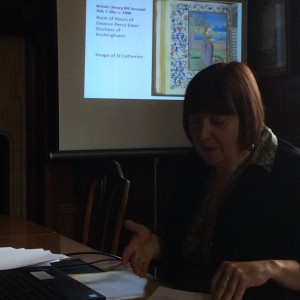 The next paper was given by Sue Niebrzydowski and focused on the relationship between canonical writers Chaucer and Lydgate, women and Marian devotion. Her paper looked at Mary’s different influences over and resonances with women throughout the course of their lives. She also argued that women wrote, owned, read and commissioned Marian works thus challenging the idea that devotional writing was a male pursuit only.

During the question session Sue spoke further about secular women’s role in Marian devotion as well as Alice Chaucer’s transi-tomb at Ewelme Parish Church in Oxfordshire which brings together the secular and spiritual female body. 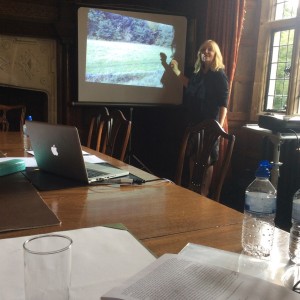 The final paper of the event was given by the final visiting speaker, Marion Wynne-Davies who spoke about an Early Tudor woman translator, Jane Lumley and how she translated Euripides’ play Iphigenia in Aulis in light of her cousin Jane Grey’s death and her own move to Nonsuch Palace.

One thing that was clear from Marion’s paper was the importance of walking the landscape. This then led us in the question session to think about physically being in the spaces connected with women’s writing and how female space may be less visible to modern scholars because of an earlier lack of interest in women’s writing. 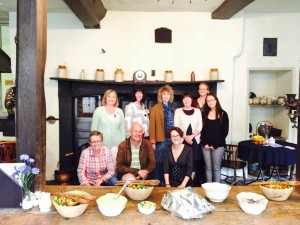 The tour of Jane Austen’s home in Alton was very enjoyable and a great way to end the event as it reinforced the significance of recognising and celebrating women’s role in and engagement with literary culture.