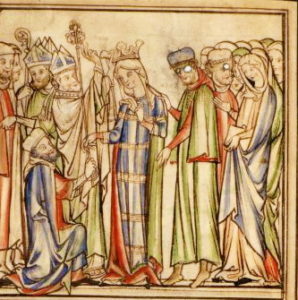 Coronation of Queen Edith, the wife of King Edward the Confessor from The Life of Edward The Confessor (Cambridge University Library, Ee.3.59, fo. 11v). Source: Wikimedia Commons; the file is in the public domain in the United States.

I’m very much looking forward to the Women’s Literary Culture gathering in Boston this summer (for the programme click here) where I’ll be giving a paper about the ways that Michael Drout of Wheaton College and I have been using the lexomics textual analysis tool to try to identify the “anonymous” author of the Vita Ædwardi.  This blog post is something of a preview; we have a lot more work to do with this powerful digital humanities tool, but right now an identification of Goscelin rather than Folcard or another cleric is looking very strong.  Tom Licence has recently argued in great detail for Folcard (forthcoming in Anglo-Saxon England); Rosalind Love states that the Vita Ædwardi has been “misattributed” to Goscelin; Frank Barlow and Elizabeth Tyler have been more reticent, simply referring to the author of the Vita Ædwardi as “the anonymous.”  A lexomically-based identification of Goscelin as the author informs our understanding of Queen Edith‘s literary patronage in the fraught decade of 1060-1070 and helps us to understand the ways that secular women could use patronage and commissions to tap into religious networks and expertise.

The Lexos tool is at heart a vocabulary-frequency analysis tool; it was developed by computer science faculty at Wheaton with design input from Drout. A team of Wheaton and Lesley undergrads is contributing to this project, so it’s an inter-mural and interdisciplinary group. Preliminary lexomics results indicate a very strong probability that Goscelin wrote the Vita Ædwardi for the retired Queen Edith, probably at Edward’s court and at Wilton Abbey during the late-1060s; they also indicate a much lower probability that the Vita Ædwardi was written by Folcard. These results are initial, so I am very much presenting them as part of a larger work in progress; at the Women’s Literary Culture meeting and through comments on this blog I’m hoping for discussion and suggestions about next steps as Mike and I and our undergraduate research assistants build and work with the corpus of Goscelin and other eleventh-century hagiographic e-texts.

A refresher on Goscelin: He was a monk at St Bertin in Flanders until about 1058, when he came to England to serve Herman, the Fleming who was Bishop of Ramsay and Sherborne.  While Goscelin was technically based at Sherborne Abbey, a men’s monastic house, for the next 20 years, he was also attached to the all-female Wilton Abbey, 35 miles away, as a chaplain to the nuns there, and he also traveled extensively with Herman as part of the bishop’s household. During this period, Goscelin found time to write a few of his hagiographical texts but he was obviously busy with his duties as part of the episcopal staff. After Herman’s death in 1078, Goscelin became something of an itinerant hagiographer who seems to have traded hagiography-composition and chaplain services for temporary residency in a number of religious establishments, including the monastic houses of Wilton, Barking, and Ely. By 1090 he had settled at St Augustine’s Canterbury, where he continued turning out hagiographical texts for that Abbey’s program of relic translation and promotion. He was renowned not just for his hagiographical skill but also for his poetry and his musical compositions.

So far, the team has collected about a quarter of Goscelin’s hagiographical texts into machine-readable format to perform lexomic analysis of the similarities among them and to compare those texts to the Vita Ædwardi. For each text, we engage in a painstaking process of scanning, editing, and proofreading; then, we have a .txt file that’s ready to enter into the lexomics portal.

We started with the only three Goscelin texts readily available in OCR format, the Lives of Amalberga, Wulfhild, and AEthelburh Figure1 – what Mike and I call the “three ladies” — shows the very close similarities between the two Barking texts and their separation from the Amalberga text.  We were confused by the outlier, the end of St Amalberga, but then realized that the end of that Vita is an embedded anecdote about another nun. Most importantly for the question on the table right now,  we were especially happy to see the close congruence between the two Barking texts.

Our second step was to check for congruence of the Vita Ædwardi with the three ladies Figure2. Lexomic analysis of those four texts produced this chart, which is very interesting because the Vita Ædwardi is more like the Barking texts by Goscelin than it is like the Amalberga text by Goscelin.

We decided it would be useful to have some sort of a control text, a vita about a historical figure, preferably a man, written at somewhat the same time, to see how it compared to the texts we already had in our database Figure3. We chose William of Malmesbury’s Life of St Wulfstan because it was easy to get a clean OCR version, it was about a historical figure, and it was composed about 1225. Figure three shows that the Vita Wulfstani separated out very neatly, and the Edward text retains its proximity to the Barking texts with William of Malmesbury remaining comfortably far away in a separate tree.

Next, we tackled the Vita Edithae, the life of St Edith that Goscelin wrote for and at Wilton Abbey c.1080. Like the Vita Ædwardi, theVita Edithae is prosimetric. Once we had a .txt file, our process was complicated by two variant versions of the text: one, now in a Cardiff manuscript, was made for and used at Wilton and includes more personal detail about Edith that the nuns there would find engaging. The other, now in an Oxford manuscript, was produced for exterior use, probably to advocate for the sanctity and worthiness of the Anglo-Saxon princess saint to the still somewhat new Norman clergy and overlords. We chose the Cardiff since it is slightly longer and seemed somehow more authentic because of its in-house use. Figure4 shows that with the addition of Edith, the Vita Ædwardi text still is very much showing similarities to the known Goscelin texts, even to the point where it is more like the Barking texts that the outlier-fifth section of the Edith text.

Finally, we have done some preliminary work with Folcard texts to see where they fall in the lexomic charts when compared with the Vita Ædwardi and the known Goscelin texts. Like Goscelin, Folcard was a Flemish monk who came to England in the late 1050s, served in the English church, and composed hagiographical texts as part of his duties. He even refers obliquely in one of his texts to his debt to the gracious queen his patron, which could be a reference to Edith, queen of Edward the Confessor but could also refer to Matilda, queen of the Conqueror.  We’ve created a .txt file for Folcard’s Life of John of Beverly (and Folcard’s Life of Botwulf is being proofed as I write this post). When we entered Folcard’s John of Beverly into the lexomics tool, we got a solid differential between Folcard and the other English texts as shown in Figure5. Note that the Vita Ædwardi “sticks” to Edith and the Barking ladies in its own tree, while Folcard’s Life of John of Beverly is out on its own branch, a factor perhaps made clearer when Wulfstan and Amalberga are removed from the chart, as in Figure6. Because of these relationships, we feel able to state in a very hesitant and preliminary way that we think lexomic analysis shows that Goscelin wrote the Vita Ædwardi.

If we’re right, then Anglo-Saxonists can place Goscelin at court with Bishop Herman somewhat consistently in 1064 and 1065; alternately, perhaps Queen Edith was very frequently at Wilton Abbey during those years. The former is more likely, as the author of the Vita Ædwardi knows a lot of intimate detail about Edith’s favorite brother Tostig and his wife Judith, and it is more likely for Goscelin to have been at the king’s court with them than them at Wilton with him.  By 1067, Edith was at Wilton as the revered dowager queen of the Conqueror’s legitimate predecessor — she was not there as the sister of the Conqueror’s opponent at Hastings.  As Goscelin worked on the additions and revisions to the text after the Norman Conquest, he was still a chaplain at Wilton and must have consulted with the former queen as she adjusted to her new life as widow and abbey resident. Such a commission was politically dangerous, of course, and Goscelin’s perceived proximity to and support of Edith and the Godwins  may have been part of his general fall from grace in 1078 after the death of his patron, Bishop Herman, and the beginnings of his years as an itinerant hagiographer.

Our team knows that we have a lot of more precise work to do in the coming months, but I hope these tentative conclusions provide an idea of the direction of the project and the possibilities for using the lexomics tool as part of an inquiry into medieval women’s literary culture.

Mary Dockray-Miller is the author of The Books and The Life of Judith of Flanders. For a review of her book please click here.

Telling the truth and telling it slant: writing Vixen