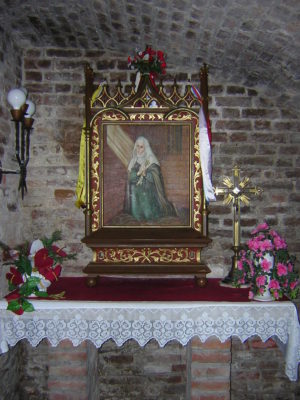 Altar of Dorothea von Montau at the cathedral in Kwidzyn, Poland. Image from Wikipedia Commons.

I’m currently in the final throes of writing up a PhD thesis on vowesses: English women, usually widows, who took a vow of chastity without the accompanying monastic vows of poverty and obedience. These women were free to live where they chose and to dictate their own patterns of religious observance. They were in a sense, half-lay and half-religious. One of the things that has intrigued me about these women is how they were known in their communities as wives of earthly husbands, yet they simultaneously identified as brides of Christ. How would one reconcile that? I believe that they were inspired partly by continental saints’ lives, such as those of Dorothea of Montau, Marie of Oignies and Elizabeth of Hungary.

These saints were matron-mystics, married or widowed brides of Christ. Dorothea of Montau, who died in 1394, suffered brutal domestic violence at the hands of her husband, Adalbert. Her biographer describes this as a deliberate divine strategy: since she was not free to devote herself to a religious life, Adalbert’s blows served to teach her to love suffering, to be patient, and to submit to the divine will. Her marriage was, then, a period of education. When Adalbert died, she was walled up as an anchoress.

Flanders beguine Marie of Oignies, who died in 1213, also called herself a bride of Christ whilst married to an earthly husband. Her biographer wrote that she was married at fourteen, then converted and engaged in passionate religious devotion so that “the Lord looked on the humility of his handmaid and hearkened to the tears of the suppliant, and Jean, who previously had had Marie as a wife, was inspired to entrust her to the protection of God.” Marie and Jean both vowed chastity and even nursed lepers together.

Elizabeth of Hungary, who died in 1231, was a royal widow. She married young and was twenty years old with three small children when her husband died on crusade. She was a prominent royal figure and dramatically harsh ascetic, believed to have worked several miracles and converted many. She modelled the life of a high born religious widow and her life and visions were popular in fourteenth and fifteenth-century England.

Each of these three saints, along with others, such as Bridget of Sweden and Angela of Foligno, presents an example of the arrangements made by mystically-inclined wives to accommodate earthly and heavenly husbands. Ultimately, the conflict could not be reconciled until the woman was separated or widowed, and indeed women were rarely vowed in England before their husbands died. However, for any non-virgin to identify as a bride of Christ was potentially controversial. Jerome, Ambrose, Chrysostom and other early writers used bridal language exclusively in their exhortations to chastity for virgins, never for widows.

However, as lay piety took off in Europe in the fourteenth and fifteenth centuries with movements like the Devotio Moderna, people began to devote themselves to God without removing themselves from the world. Thus models for holy living had to be adapted to accommodate families, property and other responsibilities. Examples for female piety needed to incorporate the saintly wife and mother: the Virgin Mary was frequently depicted as such and saints with a domestic emphasis, such as St Zita, rose to popularity.

Such ideas, along with biographies of continental saints, reached England in a number of ways. The most significant seems to have been the work of the friars. The friars were itinerant: they travelled, preaching and begging, and established friaries to be on hand to hear confession and dole out spiritual advice. Several vowesses took their vows at friaries and left bequests to individual friars in their wills. It seems likely that these friars would have shared stories of the continental matron-mystics who proved that wedding Christ was an option even for non-virgins, a welcome source of inspiration, validation, and encouragement.

Evidence of this can be seen in the life of the most famous, or infamous, vowess Margery Kempe. Although by no means does she exemplify vowess piety, of which there was a broad scope anyway, her circumstances were fairly typical. She was of the same urban mercantile class as the probable majority of vowesses and would have been exposed to similar influences. She explicitly acknowledged these continental saints’ lives and consciously allied herself with them. She cited Elizabeth of Hungary as justification of her weeping and wailing, claiming that the saint “cried with a loud voice, as is written in her treatise.” [Translation my own.] She also referred specifically to “a woman named Maria de Oegines and of her manner of living, of the wonderful sweetness that she felt in hearing the Word of God, of the wonderful compassion that she had in thinking on his Passion, and of the plentiful tears that she wept”. She also clearly identified with Bridget of Sweden: she records, at one point, Christ telling her “I tell you truly: just as I spoke to St Bridget, I speak to you, daughter.” Like Marie of Oignies, Margery was loyal to her husband until he agreed to a separation and her vow of chastity. She also practised secret asceticism whilst married, like Dorothea of Montau, and visited Danzig, Dorothea’s home, when on pilgrimage. Both women recounted a mystical wedding with Christ.

Margery’s Book also testifies to how she was influenced by the friars. B. A. Windeatt has tracked her many interactions with them, including John Capgrave, an Augustinian friar in Lynn, who produced a number of vernacular saints’ lives for women readers, and Thomas Constance, a Dominican, who cited the example of Marie of Oignies to her. Carmelite friar Alan of Lynn has been identified as the author of an index of Bridget’s revelations and prophecies and Margery mentions his support early on in her career, when some masonry and roof timbers at St Margaret’s church fell on her head and he retrieved and weighed them, declaring it a miracle that she had not been killed or seriously injured. He was evidently a lifelong friend, as he appears again much later in the book when he was banned from conversing with her and then the two were reunited in “great joy and gladness”. She also wrote that he “informed her on questions of Scripture” and it is likely that he spoke to her about continental saints.

Much of the second chapter of my thesis is concerned with tracking similar influences in the lives of lesser-known vowesses. The surviving evidence is patchy but, I believe, it strongly suggests that Margery was not alone in her identification with brides of Christ on the Continent. It is certainly clear that, although for a widow to identify and be identified as a bride of Christ initially appears to be theologically problematic, by the late fifteenth century it had gained widespread acceptance in England. A tradition of vowed widowhood stretches back as far as at least the eleventh century, and of course some women took that vow for practical rather than pious reasons. Nonetheless, it was partly because of ideas adopted from the lives of continental matron-mystics that the vowess vocation flourished, reaching its peak toward the turn of the sixteenth century. The lives of saints such as Dorothea of Montau, Marie of Oignies and Elizabeth of Hungary taught that women who were or had been married could embark not just upon a religious life, but a spousal relationship with Christ Himself.

Women’s letters from the margins: the case of Alice of Worcester