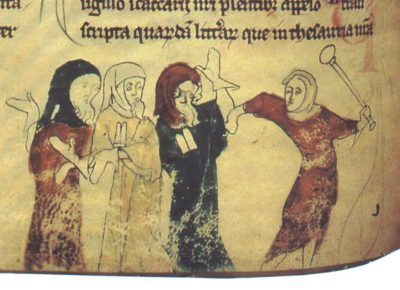 Scholarship on European women’s letter writing is increasingly challenging the canonical notion of women’s exclusion from medieval literary production. As Clare Monagle and I argue in a forthcoming chapter, there was a lot more letter writing by medieval women than has typically been recognised. However, even if we look beyond the customary shield maidens of women’s letter-writing culture —Héloise d’Argenteuil and Hildegard of Bingen, for example— it’s still true to say that most women who wrote (or at least, composed and sent) letters were members of some kind of elite. In this post, instead, I want to point to the important, rare occasions when other voices make their way into the record.

My own research examines English, thirteenth-century, royal and administrative correspondence. Most of these letters were sent by and addressed to men, but it’s already clear from my preliminary findings that women sent an unexpectedly substantial minority of the correspondence preserved in royal archives (roughly 6% in my sample). These were mainly elite women, usually with some personal connections to the court, as I have argued elsewhere. The graph below illustrates this forcefully: of the 440 thirteenth-century letters from women I’ve examined in the Ancient Correspondence series of The National Archives, UK, the vast majority were written in the names of the king’s royal relations and noble connections; a notable minority were written by women’s religious communities or their leaders; very few were sent by women of low social position or contingent circumstances (and some I’ve yet to identify firmly). 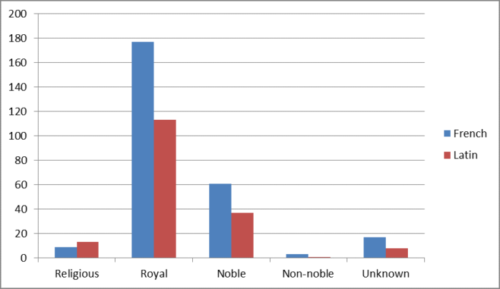 Hence, two letters sent respectively to the king and the chancellor by a former Jew known as Alice of Worcester are unusual among those that survive from the reign of Edward I. My work in the correspondence of medieval English royal government rarely provides opportunities to encounter what might be called ‘marginal’ voices like Alice’s, making it all the more important to share it with a wide audience, here.

We don’t know a lot about Alice of Worcester. As with many conversi, there is no record of her previous, Hebrew name. She gives only the new baptismal name of her conversion, and her town of original residence. However, by the act of sending a letter itself, she presumably laid claim to some connection to the chancellor and king.

A number of converted Jews moved in royal circles in Edward’s reign. We know, for example, of an ‘Eleanor of St. Paul’, formerly a Jew of London. Although the law declared otherwise, after her conversion Eleanor was granted the right to retain her property by the king in 1289. Edward’s daughter had requested his assistance on the woman’s behalf. The fact that the king’s daughter (and her mother) shared a Christian name with this lady suggests that she (or they) sponsored her conversion for some reason. Eleanor of St. Paul may have had some commercial relationship to the royal family prior to her conversion, as seamstress or laundress, for example, or perhaps as a connection of one of the king’s London goldsmiths. Other conversi acted for Edward in a range of roles, such as Martin ‘le Convers’, who was given 15l. 6s. 8d. for buying a bay horse to carry the queen’s letters in 1300, and one Alexander ‘le Convers’, who was among the king’s naval leaders into the reign of Edward II.

However, converted Jews often found themselves struggling for livelihood: deprived of their former property and wealth, cast out from their former communities of support, and sometimes excluded from their earlier employment (especially in the case of money lending). For this reason, Edward’s father, Henry III, had instigated the Domus conversorum, a house of charity for converted Jews —one of which once stood in Chancery Lane and was overseen by the Keeper of the Rolls, with other domus apparently located in major towns such as Bristol and Oxford. Despite royal patronage, these houses frequently struggled to secure their essential income. So, while they may have offered some sanctuary to destitute conversi, the converts were not necessarily much better off inside the house than outside.

Whatever her previous status or employment, Alice of Worcester seems to have found herself among such a disadvantaged group after converting to Christianity. Both of her surviving letters were attempts to secure her livelihood and that of her son, and reveal how desperate her circumstances has become. (Alice’s son’s name is not recorded, but he acted as the bearer of her letters on both of these occasions, and others that are mentioned in passing.) Letters of this kind are often hard to date. However, from a mention in her letter to the king of his recent arrival in England and reference to previous arrangements for her upkeep during his father’s reign, the letter to Edward I probably dates to the second half of 1274. In this year, Edward returned to England as its king, after spending time abroad on crusade and visiting his lands in Gascony. In her letter, Alice asked the king to renew his permission for her to obtain her corrody (a type of royal pension) at the priory in Worcester where she had been staying, a similar grant having expired upon his return to England. This letter (The National Archives, SC 1/16/63), written in the French of England, was printed by Tanquerey in the early twentieth century (who, in my view mistakenly, dated it to 1289) and is available online. It isn’t clear how the king responded to this request, but he had obviously responded positively to an earlier approach made to him in Gascony by a similar letter, also carried by Alice’s faithful son, providing some relief —albeit temporary— in her need.

Alice’s letter to the chancellor (SC 1/24/201, is by far the most moving of the two surviving examples. It has never appeared in print to my knowledge, so I offer it to you in translation below. The letter probably postdates Alice’s correspondence with the king in c. 1274, since Robert Burnell, the chancellor to whom it was addressed, didn’t become the bishop of Bath and Wells until early in 1275. At some point since her previous letter, Alice had left the care of the priory at Worcester, and was living in Chester. She was unwell and apparently without support. She appears to have been in correspondence with Burnell on another, intervening occasion, at which time he had written to one of the domus conversorum on her behalf. Alice wrote to plead for further assistance. The domus had rejected her despite the chancellor’s previous instructions. Although her letter conforms to the typical format of all correspondence addressing the crown at the time, it sometimes departs from these standards in its language, which is rich in scriptural references compared to contemporary letters. In my opinion this was almost certainly the result of a personal touch, despite the undoubted (and entirely commonplace) use of a scribe to produce the final copy. It gives us a fleeting insight into Alice’s learning, her desperation, and her self-representation as a new Christian as she pleads her case.

Probably, given the known budgetary problems of the domus as an institution, the house in question was already over-extended in its financial commitments and wary of taking on additional mouths. The domus concerned was presumably the one in Chancery Lane. An inquest made in the reign of Edward II records that an ‘Alice of Worcester’ had been resident there sometime before 1280. It seems likely, then, that Robert Burnell acted to promote Alice’s acceptance by the domus, perhaps after receiving this letter. However, movingly, the fourteenth-century inquest also records that by 1280, Alice was no longer resident in the domus and that her subsequent whereabouts were unknown. Her struggle to maintain herself on royal charity apparently having failed, she either ‘apostatised’ and returned to her faith community in the hope of their support, found some menial work outside the house through which to support herself, or died, unremarked and unmemorialised.

Although these scraps of Alice’s story are particularly sad and affecting, in fact it was not only women of such marginalised communities as the late thirteenth-century conversi who found letter writing to be a useful, or perhaps their only avenue for seeking help when financial or other needs became pressing. For example, The National Archives also houses letters from the female relations of Edward’s ministers, such as Katherine Paynel, a connection of a later chancellor, John Langton, and Amice de Kirkby, mother of Edward’s treasurer John de Kirkby, who wrote to beg assistance from their better-connected kinsmen. Even though my research often means I spend my time making forceful arguments about the important and active place of medieval women in society and political life, I find it salutary to remember that disadvantage, exclusion and hardship were often a woman’s lot. Royal archives may be a surprising place to find evidence of this, but even there it is present.

In my own rough translation from the Latin (taking a few small liberties for the benefit of modern readers), Alice’s letter to the chancellor (c. 1275–c. 1280) reads:

To the venerable and discrete Robert, by the grace of God bishop of Bath [and Wells], and also chancellor of the lord Edward, our king, his wretched (captiva) Alice of Worcester, conversa, if it please him, [sends] greeting. I notify your pontifical excellency that the Domus Conversorum that you recently instructed, in writing, to assign my living to me and my son —bearer of this letter— until you can provide better for me, has not deigned in any way to accept your letters granted to me under your seal. On account of this I return to you as if to my refuge, pleading tearfully that in this matter you might wish to grant some remedy. Let it be known that I remain at Chester, not strong enough for travelling to work, lacking the above mentioned [living] until you might deign to send me some help, if it please you, by the bearer of this letter; then, on account of these matters, may it so happen that I, in my infirmity, am not I am forced to beg you, even if on hands and knees, that it is proper to intercede. Farewell. May you have mercy on my wretchedness with the greatest mercy, as the lord Jesus Christ had mercy for the Blessed Mary Magdalene. Farewell.

I would like to dedicate this post to the memory of my father-in-law, Anton Neal, who had an abiding interest in the history of the Jews and their faith, and who passed away as I was preparing these thoughts.